.After San Lorenzo Park Clean-up, Questions Over What’s Next 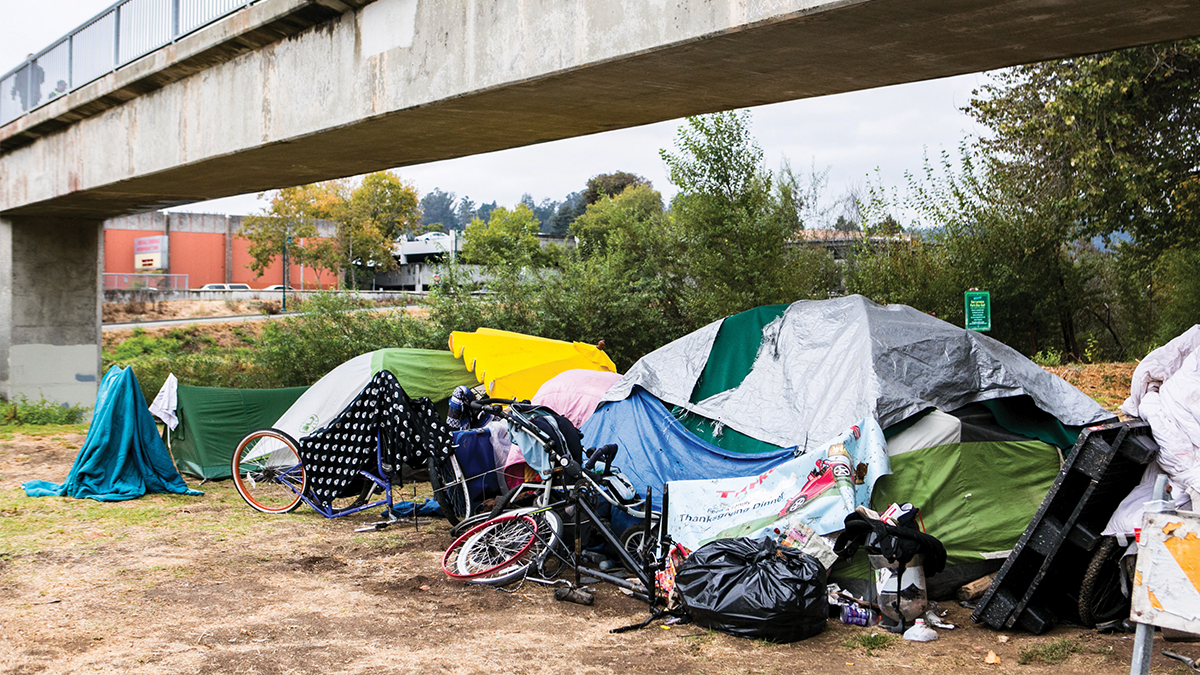 Within 24 hours of GT’s cover story last week on the new San Lorenzo Park encampment (“Tent Situation,” 11/8), the camp was being cleared out.

Parks and Recreation Director Mauro Garcia, who declined to answer questions for our previous story and referred us instead to city manager Martín Bernal, later outlined a more tightly managed vision for the tent city in an interview with the Santa Cruz Sentinel. He announced there would be new guidelines, including individual 15-by-15-foot demarcated camping spaces after the temporary 24-hour evacuation was lifted on Friday, Nov. 9.

Even though it was only temporary, the sweep highlighted the need for a closer look at the coordination between various decision makers responsible for creating a long-term plan on homeless issues—for example, at the city and county level. What steps the city will take next were not clear to county spokesperson Jason Hoppin, as he discussed in our cover story.

But both Bernal and SCPD Chief Andy Mills bristle at the suggestion that the city hasn’t articulated detailed plans to county officials, noting that city and county leaders have been meeting and working together on homelessness issues. County health workers, meanwhile, are trying to halt the spread of Hepatitis A, which began working its way through the homeless population earlier this year.

Although the camp has bright spots, Vice Mayor David Terrazas tells GT via email that “no one believes that the current camping on the San Lorenzo benchlands is a viable permanent solution.”

“While not ideal,” he continues, “the current situation at the benchlands has allowed staff from the county’s Homeless Persons Health Project to coordinate services in a central place and provide vaccinations to protect and reduce further Hepatitis A cases.”

Garcia, the parks director, tells GT that there’s another clean-up planned the week of Nov. 27, and that both police and rangers are continuing to patrol the area. The Salvation Army winter shelter will be opening Wednesday, Nov. 15. Bernal suggested to the Sentinel that the camp should dissolve by mid-December. But with people on the street far exceeding the number of beds available, it isn’t yet clear where they will go.

The encampment has shone a light on the plight of the homeless, both their hardships and their impacts.

It’s too early to say, though, how the county and city will mitigate these issues—or even which government agency is willing to take the lead on which initiatives. No one, though, is saying things can go on like this forever.

Greg Pepping, executive director of the Coastal Watershed Council, has been leading habitat restoration efforts along the San Lorenzo River, just downhill from the park. Pepping, who also serves on the city’s Planning Commission, questions the decision to allow an encampment in the public park.

“The city has done so much work, with so many different partners, to activate the riverwalk. This is just so out of step with that,” says Pepping, who says he witnessed a homeless person relieving themselves on the river levee just this past Monday. “If you could imagine trying to pick up people’s feces, their needles, trash—is that easier in the wet sand or on a harder surface? Maybe this encampment is the right idea, but it’s in the wrong place.”

Chief Mills, who announced last month that he would soften camping ban enforcement, says he’s doing the best that he knows how—and that Bernal and the parks staff are doing the same.

“The city is doing everything humanly possible to limit the impacts, including providing places for them to go to the bathroom and to wash their hands for Hep A prevention. We’re cleaning up the area and picking up discarded syringes,” Mills says. “I don’t know what the Coastal Watershed Council wants us to do. We’re certainly open to any suggestions.”

Garcia says, in their clean-up, Santa Cruz parks rangers picked up 108 syringes, and that those monitoring the encampment will encourage people to use the county’s sharps depository located on Water Street or turn them over to park rangers, all of whom carry sharps containers.

Bernal says he’s not surprised by how many needles rangers say they found. “We’ve been pushing people to different places, and they are still going to use drugs. They need help with recovery,” he says, pointing out that there are no drug rehabs or mental health facilities homeless people can go to in the city.

Bernal says the face of homelessness has changed drastically in the last 20 years, and that the homeless of previous generations were mostly smoking pot. Cannabis didn’t make people aggressive, he says, whereas now, with increased methamphetamines and heroin use around the country, people’s behavior is more unpredictable, bizarre, and sometimes dangerous. “People want the city to fix it,” Bernal says, “but what we have at our disposal is police, fire, and public works. This is not something the city is going to solve. We are the first responders, but we need the state, the county, the nation.”

City and county officials agree on the framework for longterm goals and solutions: essentially, create storage facilities for homeless people, establish a day-use center for services and provide housing or shelter to get the homeless off the streets.

The multi-million dollar question: how do we get there?

Mills stresses that the county has an important role in providing funding and solutions. “The primary responsibility for dealing with some of the difficulties is solely the county’s,” Mills says. “The Health and Human Services budget is $280 million. Mental health, drug addiction, some housing—that’s in the county purview, and so we all would agree that it’s vital to have the county at the table as we look for short-term, intermediate and long-term solutions.”

Frustrated by the suggestion that the city needs to show the way, with a more detailed timeline, Mills says the county can lead on this issue as well. “They’re the ones with the legislative mandate in the budget,” Mills says. “Why aren’t they coming up with the plan?”

Hoppin is skeptical of the notion that the homeless encampment will dissolve on its own, as Bernal has suggested, once the rain starts—an approach Hoppin calls “the alka-seltzer solution.” He says the county will continue supporting the idea for day services benefiting the homeless community.

“There seems to be an agreement for those services. What we don’t know is where and what the funding is,” he says. “We don’t know where it goes from here. [City leaders] don’t seem to know that either, other than there’s an agreement on the need for day services, but when that will happen, we don’t know.”

Next ArticleHow do you define success?