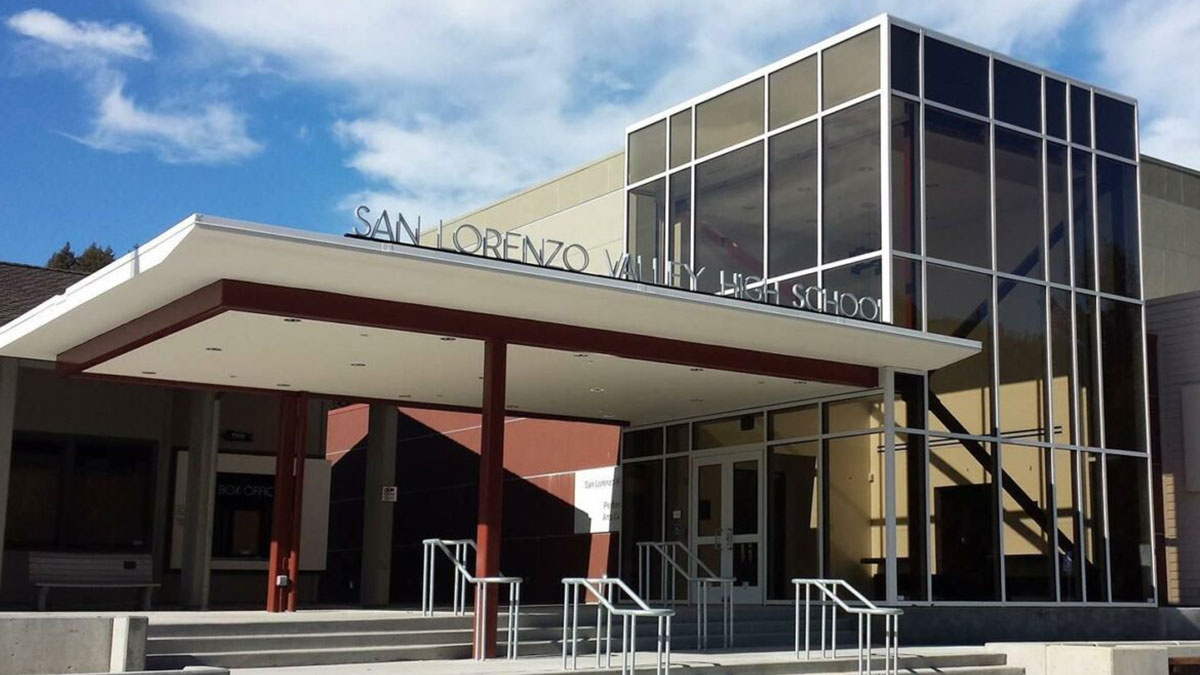 Leann Anderson was still four months away from her 18th birthday when she proudly accepted her high school diploma. The Bonny Doon girl had struggled to overcome dyslexia. But in the end, she’d triumphed.

“You f****** did it! Congratulations!” came the supportive, if profane, message—allegedly from Eric Kahl, the teacher who, she says, first showed an interest in her back when she was a freshman, increasing that attention through her senior year. “Damn f****** right and I looked hot while doing it,” she replied. “Duh,” he messaged back, according to the allegations.

His next comments, shared with the Press Banner by Anderson in the form of screenshots of the conversation, set off a wave of confusion that would later lead her to look back on special attention she says Kahl gave her over her high school career, and moments she says he touched students, including her, inappropriately. Anderson says she’s concerned for the wellbeing of current pupils, as other current and former students come forward with disturbing stories of what they say they endured at San Lorenzo Valley schools in recent years.

At least three current or former teachers are now being represented by Joe Cisneros of the Monterey-based Biegel Law Firm, who says Kahl didn’t groom, touch or use social media to inappropriately communicate with any students. According to interviews conducted by the Press Banner after reviewing social media posts and screenshots of conversations between her and Kahl provided by Anderson, at least seven current or former San Lorenzo Valley Unified School District employees have been accused of inappropriate behavior in recent years. Two defendants already face charges in the courts.

In the reported graduation day exchange between Kahl and Anderson, the social studies teacher inquires about the illegal drugs he expected one of Anderson’s friends would likely ingest for the occasion. The message shared with the Press Banner contained three smiley faces, saying, “hope she didn’t take too much Molly,” to which Anderson said not to worry. Then the sender transmitted at least five psychedelic ‘.gif’ photos, including an Alice in Wonderland-style meme that said: “EAT ME.” After she left school, the private Instagram messages kept rolling in. The district forbids teachers to use social media to communicate with students (except for specific school projects) as well as former students who are not yet of age.

After she turned 18, Anderson began to dabble—alongside perhaps a million other like-minded entrepreneurs during the pandemic—with paid-content site OnlyFans. Kahl followed her there, too, she says. She started to think about how strange it was that their relationship had gone, so quickly, from an authority figure working with a teen struggling with a language-based learning disability to an older man paying her for risqué photos. And she couldn’t help but think back to all the times during her senior year where, she says, he would accidentally-on-purpose graze private parts of her body in passing.

Kahl’s lawyer, Cisneros, denied he did anything of the sort.

“He’s going to defend himself if it comes to that point, which I’m not sure if it will,” said Cisneros, adding even if the post-grad contact might come across as “unseemly,” that doesn’t necessarily make it a policy violation.

Anderson’s experience is one of the many stories being submitted to the @santacruzsurvivorsspeak Instagram page, and while most of the commenters are anonymous, some have put their names or phone numbers with their statements for admins to verify or to pass on to authorities.

In an email to the Press Banner, the founders of the social media account, who asked to remain anonymous, said they were San Lorenzo Valley High School alumni who sought to spread “awareness and support for the survivors of sexual assault and abuse,” and that they encouraged other sexual assault survivors to reach out.

“We are here to change the course of our community and push for a better system, ie: consent classes for students, new faculty at slv (sic), better faculty training,” the email read. “We have realized for a while now that the culture at SLV in particular has many issues, and we’ve been wanting to do something about it, but never had the platform before now.”

It wasn’t just Kahl’s inappropriate touching that Anderson says she’s been grappling with, but also situations where she says he would sit close to her and help her cheat, instead of attempting to teach her techniques to overcome dyslexia.

“He should have been actually helping me, and helping me get an education,” she said.

After Anderson accused Kahl in a March letter to the district, she inspired more people to talk about what they say happened to them with educators in the Felton area. The stories range from being sexualized while in class to touches that lingered too long to shoulder rubs that never should’ve happened—and even to several more serious sexual abuse claims.

Some of the most disturbing allegations were about William Winkler, a teacher who’s taught in the district for more than 30 years. Both Kahl and Winkler have been sent home on leave while school officials consider the evidence. Cisneros, who also represents Winkler, denied the sexual assault allegations against his client.

“He denies that he did anything,” he said. “There’s no reason for him to be on paid administrative leave.”

Critics say Winkler should not have been allowed around students after being arrested for domestic abuse in 2010, at which time the District Attorney’s office decided not to file charges. The school district declined to say whether or not it conducted its own internal investigation at that time.

“As with most investigations, we have to sort through anonymous and unnamed allegations to guide actions,” she said in an email interview. “Once we get that initial information, we immediately look into it further. This triggers our mandated reporting obligation to law enforcement agencies. We continue to cooperate with them as they further investigate. Once we have determined someone has violated district policy, the individual will receive appropriate disciplinary action up to and including termination.”

Sheriff’s Office spokesperson Ashley Keehn said investigators are working with the school district to determine if any crimes have been committed related to the Santa Cruz Survivors Speak allegations. She said that no charges have been filed, and no arrests have been made.

“We do take all reports of sexual assault or misconduct seriously and investigate them to the fullest,” she said. “We also encourage anyone who has endured sexual violence to contact us.”

This week, Michael Henderson, a former San Lorenzo Valley middle and high school tech teacher, flew in from his new home in Washington state for his Santa Cruz County Superior Court dates. He was held to answer by the judge on four counts of lewd acts with a minor under the age of 14. His case is now proceeding to trial, and he remains out on a $150,000 bond.

During the first day of the preliminary hearing, April 19, the lead sex-crimes investigator on the case testified that it wasn’t a disclosure by the girl in one of her elective classes that prompted the Sheriff’s Office to get involved. They began investigating, Sgt. Socorro Luna said, after the girl developed an eating disorder and her mom was trying to figure out what was wrong.

Luna testified the girl said that during private tutoring and music lessons after school, Henderson would instruct her to go upstairs and tell anyone else to leave before turning off the lights and proceeding to touch her inappropriately. That included weird hugs and touching her buttocks at least once during a massage-like activity called “Moving the Woodchips,” Luna said. “Oh, you have woodchips on your bottom,” Henderson said, right before that inappropriate contact, the girl recalled, the court heard. The girl also said Henderson touched her breast on as many as three occasions and committed other illegal sexual acts, Luna testified. Defense lawyer George Gigarjian tried to poke holes in the accounts, managing to get the judge to exclude one piece of potential evidence, and getting Luna to confirm law enforcement never actually went to the site—right across from San Lorenzo Valley Middle School/High School—where the offenses reportedly occurred.

In a phone call recording—entered into evidence at the preliminary hearing—of the girl speaking with Henderson, he admitted to isolating her upstairs during private lessons, asking her to lie down, and placing his hand on her back, but he denied inappropriate contact. During this call used to bring charges, he apologized several times and agreed he would call children “pretty” and “beautiful,” Luna said. When he was hauled in for questioning, Henderson was asked about hugging children. “Sometimes children just need to be hugged,” Luna recalled him saying, adding he mentioned children would sometimes run up to him with their arms open, but that, other times, “he just knew” they needed an embrace, even though they gave no such overt indication.

On the third day of the preliminary hearing, April 21, District Attorney’s office inspector Kelli Freitas testified that one teacher had expressed regret about not reporting the girl’s allegations. She also said she spoke with three other witnesses who told her about other incidents where Henderson had given shoulder rubs to other girls—or otherwise made them feel uncomfortable—while he was teaching at the middle school. At one point the principal was notified but no action was taken, two of the witnesses said, Freitas testified.

Henderson’s next court date is June 9.

When asked about the case, Bruton emphasized the reported incidents are said to have occurred off district property, that Henderson was immediately taken out of school when the accusations came to light, and that he was fired after his arrest.

“The district has also conducted training sessions related to professional conduct on social media, at extracurricular activities, and during community events for school staff,” Bruton said. “There are codes of conduct for staff that are absolutely expected and will be enforced.”

Next ArticleAnti-Asian Sentiment Not a Novel Issue, Community Advocates Say