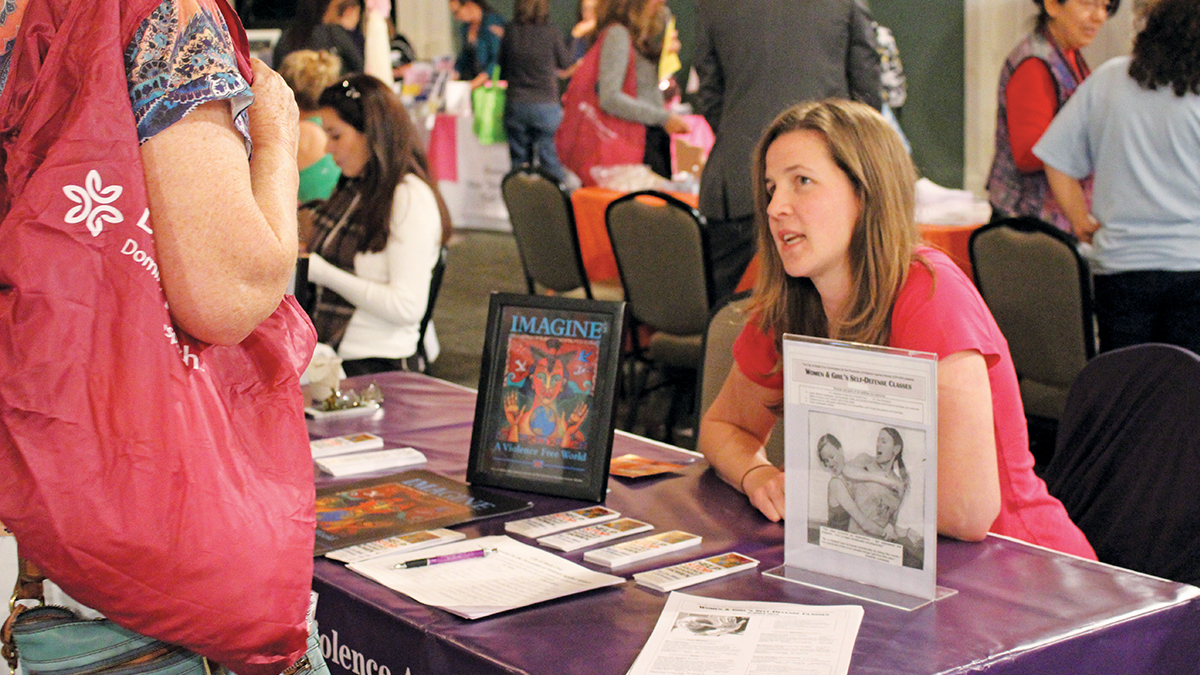 As Liz Camarie walked out of the Regal 9 movie theater one late afternoon, she realized that she was being watched. A man was surveilling people in the window reflection across the street. It was around Christmas 15 years ago, and she had been shopping that day, carrying a bag and quite a bit of cash.

“I crossed the street and I glanced back, and he started to follow me,” she says.

If it had been 20 years earlier, she would have run. But she had taken and taught dozens of self-defense classes, so she turned around and confronted him.

“He just turned around and walked away,” she remembers. “I have no doubt that if I wasn’t aware of what was going on, I would have walked over to the parking lot and he would have attacked me.”

Camarie says she has been followed other times, too, and has learned to always do the same thing. She attributes her confidence in these situations to the Santa Cruz Parks and Recreation women’s self-defense classes, which the Commission for Prevention of Violence Against Women (CPVAW) has been offering for more than 35 years.

Recently, however, the CPVAW decided to cut back the number of classes from 15-20 annually to only five in 2018, all of which will be offered in May. The change comes as high-profile allegations of sexual assault and harassment have dominated national headlines—and show no signs of slowing. Since early October, Harvey Weinstein, Kevin Spacey, Alabama Senate candidate Roy Moore, Dustin Hoffman, Sylvester Stallone, Ben Affleck, Sen. Al Franken (D-Michigan), former President George H.W. Bush, Charlie Rose, and Louis C.K. have all been accused of sexual assault or misconduct. The trending #metoo movement—a social media campaign to illuminate how many people have experienced such violence—quantified the magnitude of the problem.

According to the National Sexual Violence Resource Center, one in five women is raped at some point in their lives, and one in four girls will be sexually abused before they are 18. The Santa Cruz Police Department (SCPD) responds to an average of 28 monthly domestic violence calls—with a total of nearly 250 calls as of September of this year, the last month with data available. Rape reports were also up compared to the same point last year—52 to last year’s 38.

“With the growing dialogue around sexual assault and harassment, it seems like an important time to actually be promoting these classes and standing up for our values as a city,” says class instructor Leonie Sherman, who has contributed to GT.

CPVAW chair Brooke Newman points to dwindling class sizes as the reason for the cuts. The self-defense classes—which are free, and will remain so—were once packed, and Camarie recalls waiting months to get a spot. But now the city cancels around 50 percent of them because of low enrollment.

“Rather than spend money to pay someone for classes that aren’t occurring and not serving the community the way we want to, we will cut the classes back and be more robust in how we are serving our community,” says Newman.

She says the commission will pivot to better educate men as a means of preventing rape. Critics of that strategy blame the declining enrollment on the city’s lack of marketing and outreach efforts, and say the classes should not be cut.

CPVAW cofounder Gillian Greensite helped create the commission in 1981, aiming to end domestic violence and sexual assault while working with the police department to address issues of sexual and domestic violence. She says fluctuations in class sizes are nothing new, and enrollment has dipped before. The past commission coordinator, Kathy Agnone, would do public outreach and promotion, like submitting calendar listings and public service announcements to local media, making classroom announcements in elementary schools and working with transitional housing and women’s crisis support groups to boost class enrollment.

“It’s not as though we have a very complex issue here,” Greensite says. “The staff should be doing a lot of publicity, that’s how you build the numbers up. It’s not rocket science.”

Holding classes in May will allow time to improve publicity and outreach for the classes during April, Sexual Assault Awareness Month, Newman says. The community class currently costs about $10,000, a fifth of the commission’s total budget, to fund Sherman’s instructor position. Forty classes were offered when Sherman was hired in 2005. Less than half that is offered now, and the budget is $8,000 higher than it was 12 years ago.

When asked what else the department budget covers, city analyst Susie O’Hara said via email that other expenditures include classes at local schools, as well as $30,000 for “supplies (for outreach, tabling, etc).” Cutting back the classes won’t save the commission money, because its fiscal year plan is already set and extra funds will have to go to other efforts benefiting violence prevention on behalf of women. It isn’t clear yet how the commission will reallocate those funds during the fiscal year, which runs through June. Newman says she hopes the commission will have a clearer funding plan following a Dec. 20 budgetary meeting.

Sherman has been the classes’ only instructor for years, and has taught self-defense classes for women and girls in Santa Cruz Main Jail and the Rebele Family Shelter. She says that in recent years, commissioners haven’t served as long as they used to, and she suggests there may have been a “shift” in the commission’s values.

“There is something that is not working, but I am not sure that cutting the classes so drastically is the best solution for our community,” she says.

Whereas Agnone used to work 20 hours a week, much of it on marketing, the commission’s duties have now fallen to O’Hara, an analyst who works for city manager Martín Bernal’s office on City Council issues and the Neighborhood Safety Team. O’Hara says she hasn’t had time to do any marketing, though Newman says publicity has been adequate because the commission has developed a newsletter that advertises the classes, and also tabled at events.

Newman says the CPVAW’s mission hasn’t changed, but admits that recent staff turnover and reduced allocated staff time for the commission has made its goals more of a challenge. The commission has had three coordinators in the last two years, and Newman says the process of commissioner appointments—which come from the City Council—as well as the amount of time needed to catch up new appointees, makes transitions difficult.

The seven-member commission meets six times a year to set goals, manage its budget and respond to sexual violence issues in the community. Newman says experts’ understanding of rape prevention have changed in the last four decades, and that the commission should focus on programs like affirmative consent policy development and implementation, and programs for high school athletics departments which are “more proactive” in preventing rape and sexual violence.

“Being aware and having the tools to help protect yourself from dangerous and violent situations is important, [but] only the rapist can prevent rape. That’s part of what we are interested in, things like coaching boys into men to educate boys at a young age that women are not objects, because not raping prevents rape,” says Newman.

Camarie, who took and taught self-defense classes years ago, sees that goal as unrealistic and believes in teaching women to protect themselves.

“It seems like the commission is aiming more toward helping men get better, get over their problems and such,” Camarie says. “I will tell anybody: I don’t believe that’s possible, it’s a sham. The commission needs to make things better for women and children in Santa Cruz. They aren’t going to change the world.”

The City Council does not have a say in the budgetary choices of the CPVAW, but if there is leftover funding from the commission, the city may withdraw it. When the classes are cut back, Newman says, the commission needs to funnel excess money into a different program so that it does not lose the funds.

Critics say that even as the CPVAW explores new approaches, it should not forget the importance of the city’s free self-defense classes.

“Classes can change things for individuals, my life was changed by these classes in really important fundamental ways,” Camarie says. “I spent at least a decade walking around scared every moment that I was out of my house. But now I don’t feel unsafe anymore.”

Previous ArticlePreview: Tandy Beal is Back with ‘Joy!’

Next ArticleThe Rebirth of Actors’ Theatre in Santa Cruz