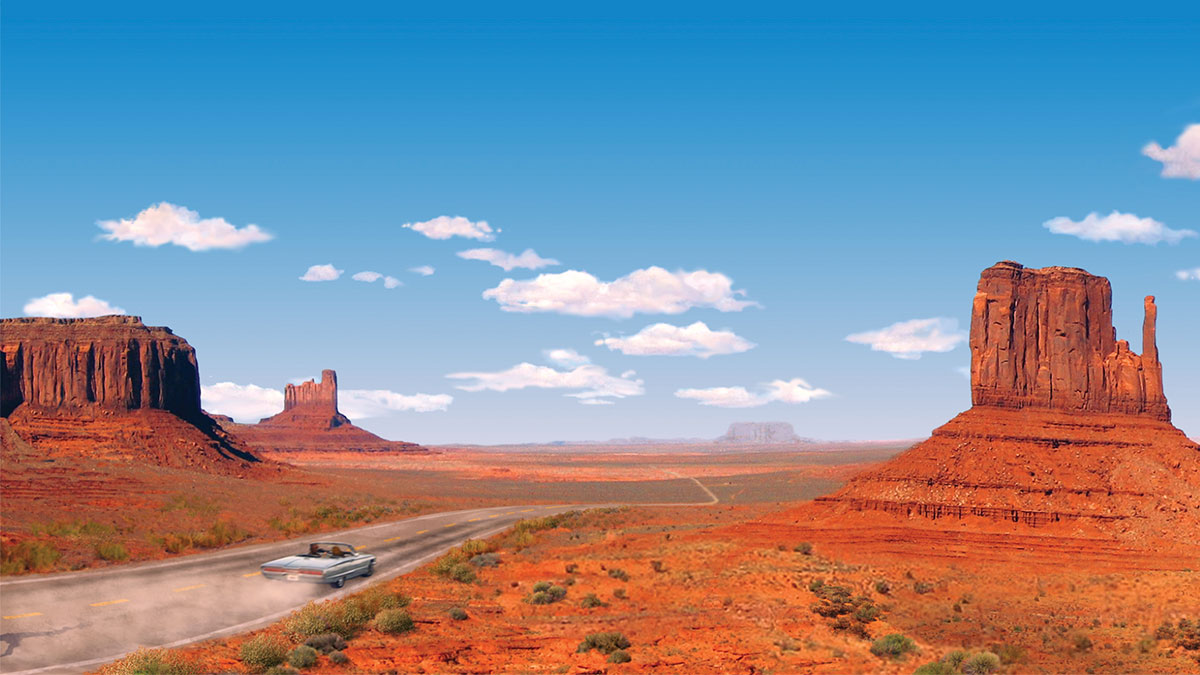 Francis Ford Coppola’s Apocalypse Now is widely considered to be one of the best films of all time. An epic adaptation of Joseph Conrad’s Heart of Darkness disguised as a sprawling, surreal Vietnam War movie, its filming went millions of dollars over budget and six weeks behind schedule—driving its director to the brink of bankruptcy and landing its star Martin Sheen in the hospital after a heart attack—before it came out in 1979.

Subsequently, the director’s wife, Eleanor Coppola, released the behind-the-scenes documentary Hearts of Darkness: A Filmmaker’s Apocalypse. Produced at a microscopic fraction of Apocalypse Now’s budget, it came about simply because she realized she ought to pick up a camera and capture what turned out to be one of the most insane shoots in movie history.

Today, there are people who consider Hearts of Darkness to be a more compelling film than Apocalypse Now. Both made it into Steven Schneider’s film-canon bible, 1001 Movies You Must See Before You Die.

“It’s impossible for words to describe what is necessary to those who do not know what horror means. Horror … Horror has a face … and you must make a friend of horror.”

“I swallowed a bug.”

That a guerilla-style, behind-the-scenes documentary could equal and even eclipse the blockbuster film it set out to document shows the potential power of making films about films. There are dozens of other outstanding examples, both documentary and narrative: 1994’s Ed Wood and 2013’s Saving Mr. Banks fictionalized the quirky stories of filmmakers beating the odds; the rescued histories of 2002’s Lost in La Mancha and 2013’s Jodorowsky’s Dune showed what happens when filmmakers can’t beat the odds; 2009’s Best Worst Movie revealed how Troll 2 developed a passionate cult following despite being terrible in every way; 2002’s Adaptation was both the film version of a book and a brilliant study of just how hard it is to create a film version of a book; and 1982’s Burden of Dreams told the story of how Werner Herzog’s Fitzcarraldo got made, with the end result managing—like Hearts of Darkness—to be arguably as fascinating and original as the movie it celebrates.

What all of these very different films have in common is that, when broken down to their most elemental level, they’re all asking the same question: why are films worth making?

This year’s Santa Cruz Film Festival, which returns to the Tannery Arts Center for a second year Oct. 11-15, is spotlighting two movies that go about answering that question in very different ways. One is the opening night film on Wednesday, Oct. 11, the Cannes-award-winning documentary from India The Cinema Travellers, about the world’s last traveling movie shows that bring cinema to remote villages.

The other is a film that flips the approach of in-the-moment making-of movies like Hearts of Darkness and Burden of Dreams, and chases the legacy of a culture-shifting blockbuster 25 years after its release.

“I don’t remember ever feeling this awake.”

[dropcap]T[/dropcap]he documentary Catching Sight of Thelma and Louise had its origins back in 1991, when director Jennifer Townsend saw the then-newly-released Thelma and Louise, directed by Ridley Scott and written by Callie Khouri, a complete badass who wrote the script in longhand while working a production assistant job, won an Oscar for it, and reportedly responded to critics of the film’s feminist messages by telling them to “kiss my ass.”

Townsend was deeply affected by the film. “It blew me away,” she told me in a phone interview last week. “The very next morning after I saw Thelma and Louise, I woke up and decided to change my name.”

Up until then, Townsend had been holding on to her married name, Pierce, despite the fact that she had been divorced for many years. Inspired by the film, “I just picked a name out of the air,” she says.

She also started to wonder if other people were being inspired by Thelma and Louise in such a profound way. So she planned a research project, though she had absolutely no background in doing so.

“I wanted to find out ‘Are other people having this kind of reaction?’” remembers Townsend. “So I made up the name of a company and I put out a press release.”

She sent the release to a number of newspapers and film-themed magazines. It explained that she was seeking respondents for a research project about Thelma and Louise, and that interested readers could write her to receive a questionnaire, which contained five simple questions about their reactions to it, like “Who did you identify with in the film?” Some of the publications she sent the press release to did run something about her project, and printed her address.

“I got all these postcards saying, ‘Please send me a questionnaire,’” she says. “Some people just answered the questions, but some people sent me two, three, five page letters.’”

All of this took a while, however, in the pre-internet era, and by the time she had received all of these submissions, Thelma and Louise’s moment in the spotlight had come and gone. She boxed up the responses, with the intent of writing an article about the whole thing one day.

But years later, when she finally took the submissions out of their boxes, she felt like only a film could really convey the feelings so many had expressed.

“I realized, ‘I have to find these people,’” she says. Of course, that was easier said than done, but when she tracked down 20 of the people who had responded back then, and had interesting reflections on how the movie had affected them, she knew she had enough material to make a film that could coincide with Thelma and Louise’s 25th anniversary in 2016. She didn’t realize that she would end up being a central voice in her own movie, as well.

“I had no intention of being in the movie,” she says. “But then I realized it’s my story, it grew out of something I did, I would have to explain where the original letters had come from.”

Catching Sight of Thelma and Louise takes a unique approach to filmmaking about filmmaking, with the subjects in the film reflecting 25 years later on their reactions to the film when it came out. It also features a couple of the male actors from the film talking about the misguided masculinity of the roles they played. Townsend, who will be at the festival screening to talk about her documentary, hopes it answers that question of “why are films worth making?” in a way that captures a cultural moment.

“I think [the audience] will discover why there was such a phenomenal reaction to Thelma and Louise when it came out,” she says. “Why it created such a stir.”

One of the purposes of film festivals in general and the SCFF in particular is to take a closer look at our love of cinema in this way, says the festival’s director Catherine Segurson. These questions about the nature of movies and why we watch them are questions she is always asking herself when she’s considering films for the festival.

“So maybe I’m a little more biased toward those types of films that are exploring that,” she admits. “But I think other people will find it fascinating also, because sometimes we don’t even realize why we’re watching movies or attracted to watching movies. I like the films that are kind of meta in a way, exploring the whole purpose behind creating films—it’s the art, but it’s also what it does to the people watching films. That’s what the Catching Sight film explores, and that’s what Cinema Travellers explores.”

“The realization that we are all related is truly profound,”

[dropcap]W[/dropcap]hat’s interesting, says festival programmer Logan Walker, is that the SCFF does an open call for films, but themes invariably do pop up.

“We did notice that we were seeing some really great films that were self-reflective, that were about filmmaking, and I think more broadly were about the arts,” says Walker. “On Thursday especially, we have a lot of those films lined up that are about artists, their struggles and their vulnerabilities, and the creation of works.”

A lecturer in San Jose State University’s Film and Theatre Department, Walker says these themes are of special interest to him, too.

“If nothing else, I’m a film lover, and then the next stage is kind of reflecting on that. Once you see the story, you want to know what and who is behind that story,” he says. “And being at the Tannery, we’re surrounded by art studios and artists. So it kind of feels natural to have films that are about the creation of art.”

Also among those films this year are:

This month also brings the Watsonville Film Festival, which is Oct. 5-8 at the Mello Center and other Watsonville locations. Interestingly enough, the WFF is also featuring some films about the arts. One with particular local interest is War of the Limelight, produced by young people in Monterey County’s after-school film program. The film follows high schools comprised of Latino students and white students as they compete in a filmmaking competition—bringing questions around race and power into the discussion of why and how films get made.

“It talks about issues that are very relevant right now,” says Consuelo Alba, the festival’s director and cofounder.

Another film in the WFF that examines the nature of art is Mele Murals, about the power of modern graffiti art. And Chavela examines the life of the mysterious and sometime controversial Mexican singer Chavela Vargas.

“A lot of people might not know her, but she’s an iconic Mexican singer,” says Alba. “She broke all the rules and was a true artist in the deepest sense of the word. She was as incredibly gifted as Billie Holiday, and her story is incredible.

“Can we talk about something other than Hollywood for a change? We’re educated people.”

Since taking over SCFF last year, Segurson, who also edits the literary journal Catamaran, has learned a lot about the answer to that question.

“It really opened my eyes doing the Q&As with directors at the films,” she says. “I started to learn how hard they work, and how difficult it is to get discovered. Because you watch this beautiful movie and they get up and say ‘yeah, we’ve been working on this 10 years.’ And it’s these film festivals that are on the front line—just like the literary magazines, where that’s the first channel they ever get to show their work to the public. It’s a validation of their work, and it brings attention to their work, and it’s really important.”

For Alba, it is also about the festival’s role in the community. “It’s about creating that space where people can see themselves reflected in the stories they’re seeing on the big screen,” she says. “That creates an energy that is very hard to describe.”

And who knows, one of these movies at the SCFF or WFF could have a movie made about it someday.