.A New Kind of Commune 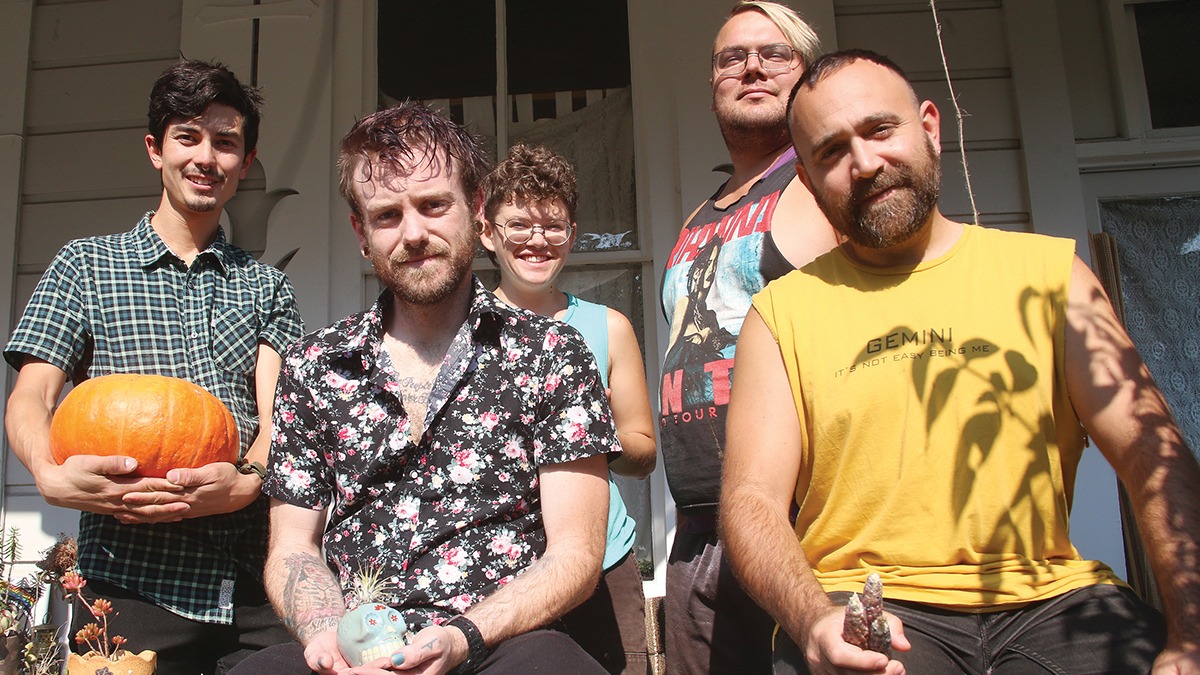 Berry Underwood never thought he would own a home in Santa Cruz by age 33.

“It kind of happened by accident,” Underwood, now 34, says of the house he’d rented with friends for about a decade. It was only after he and his housemates received a letter from their landlord saying that he planned to sell the house that a plan to stay put started to materialize.

Accompanying the letter was a right of first refusal—meaning that as the current tenants, the group had a chance to purchase their home before it went on the open market. Although not legally required, rights of refusal are sometimes written into lease agreements.

“When we first found out, we talked about buying it as a joke, because we needed humor to relieve the stress,” recalls Underwood. Then, after some deliberating––and realizing the dearth of other affordable rental options––they started to more seriously consider the idea of buying the house together.

“Some of us had, by this point, sort of looked into what would be involved in buying a house as individuals, but this was the first time that the power of collective buying really occurred to us,” he says. The thought of purchasing individually in high-priced Santa Cruz was “incredibly unrealistic,” he adds.

With multiple people as a part of the purchase, though, “All of a sudden what was impossible became possible,” Underwood says.

As a group of four, they combined their savings to come up with enough for about a 10% down-payment on the three-bedroom home. While not everyone was able to make the same financial contribution toward the purchase, Underwood says they approached the venture as equal partners.

To help offset some of the additional costs of buying their home, the group launched a GoFundMe.com campaign, where they raised $3,860 dollars from friends and community members. Underwood says the additional funds helped to cover things like lawyer fees, since the down-payment “mostly maxed out the funds we had available.”

The group’s lawyer helped them navigate writing a tenants-in-common agreement, to set the groundwork for what would happen should a member of the group die or want to sell the house at any point—a precaution “to mitigate future issues,” Underwood says.

Partition actions are what happens when one owner goes to court—to either force a co-owner to sell their share or to buy out others. Such lawsuits, Siegel says, are common. “I’ve got three in my office right now,” he says.

“In our area, it’s the only way I can see families or single people who are not incredibly rich being able to own property,” he says. “The only alternative is that the property continues to get consolidated into the hands of the few.”

Paul Bailey, co-owner of the local real estate company Bailey Properties, says he’s noticed a recent uptick in collective purchasing between multiple family members in Santa Cruz. While he predicts communal purchases between friends could also trend upward, he says he hasn’t seen it happen yet.

Nationwide, the National Association of Realtors reports that “multigenerational” buyers––defined as adult siblings, children, parents, or grandparents purchasing together––currently account for about 12% of total home purchases. Across the pond in the United Kingdom, banking giant M&S bank recently launched a “mortgage for four” option, based on research that most millenials would consider co-buying as an entry into homeownership.

As for those purchasing in Santa Cruz right now, Bailey says most of them skew younger. “I think to a great degree it’s the 40 and unders, the Bay Area young guy who’s making a hell of a lot of money,” he says.

The concept of cooperatively owned businesses has also been picking up momentum in Santa Cruz. This past spring, a local compost program re-launched as Hard-Core Compost under a cooperative model.

And in a step toward bolstering worker-owned businesses, the Santa Cruz City Council voted unanimously on Oct. 8 to adopt a resolution declaring October “Co-Op Month” in the city of Santa Cruz. The council directed the city to foster the “development and growth,” of employee-owned businesses. Co-op Santa Cruz, an organization that advocates for worker cooperatives, helped draft the resolution.

Co-op Santa Cruz organizer Faisal Fazilat says says the vote shows that locals are ready for a new approach, one that shifts the economy in a more democratic direction.

According to materials from Co-op Santa Cruz, there are 2,410 baby boomer-owned businesses in Santa Cruz County. Their looming retirements in coming years create potential for what’s referred to by demographers as a “Silver Tsunami”—a possible economic jolt with business owners reaching retirement age. Many of the businesses, Fazilat notes, don’t have succession plans. “We’ve had businesses come to us that do want to transition their business into a cooperative, but they’re facing technical challenges and legal challenges on how they can do that,” he says.

Co-op Santa Cruz will work with the city’s Economic Development Department to draft policy proposals for how to support a new city laws around worker-ownership.

When it comes to cooperative home ownership, Jesse James, who lives in a co-owned house in Santa Cruz, says cooperative efforts aren’t without their quirks. Home purchasing challenges—like navigating credit and loan approvals, for instance—are magnified when working as a group, James explains.

“It’s incredibly painful and complicated, because we’d think we’d have everything in order, and [the lenders] would come back and say, ‘Actually, that part of that of your income doesn’t count,’ or, ‘You’re going to need this much more down to make the numbers work,’” says James. “Instead of just one person, that trickles down through multiple people.”

Both Underwood and James lived in their respective houses for years before taking the purchasing plunge. They say that was crucial in making the process work.

“I’ve had the opportunity to live with this group of people for long enough to really feel comfortable sharing space with them, but also long enough that I feel that their patterns are reliable to me,” says Underwood, adding that “over communicating” is critical.

“You can never communicate too much,” he says.