.‘Thank God For A Generator’: County Tested By PG&E Blackout 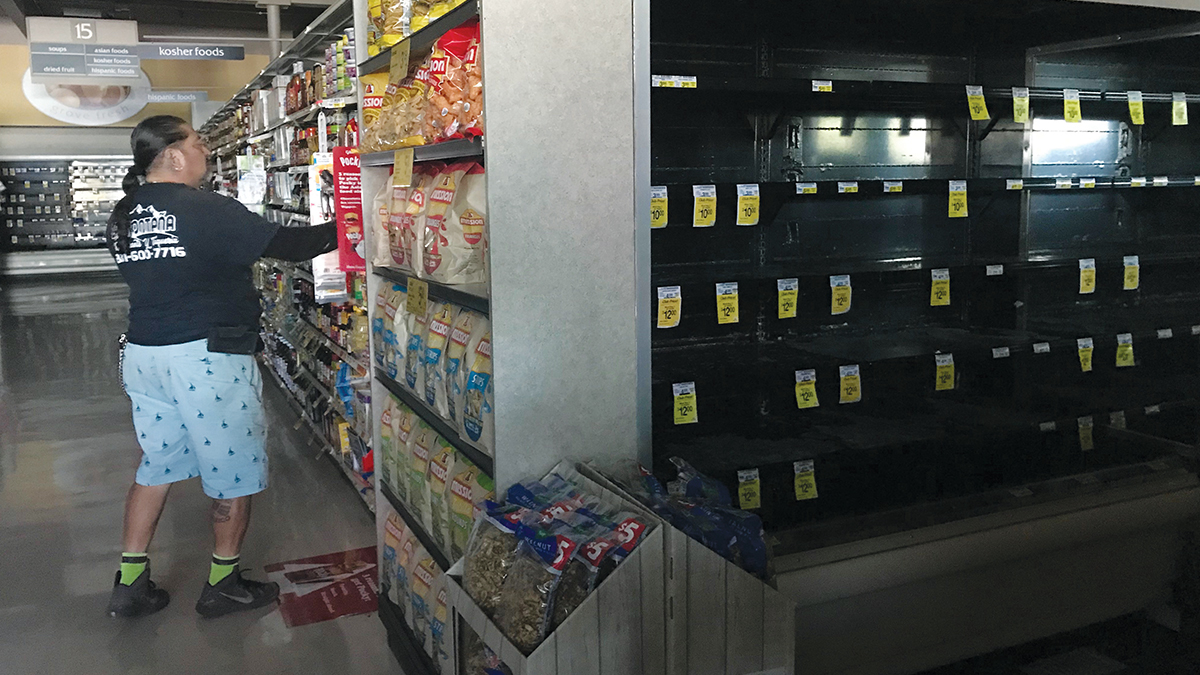 On Thursday afternoon, the weather in Aptos was clear and sunny with a slight breeze. From the outside, the Safeway at Rancho Del Mar shopping center looked calm, too.

Inside, the store looked like something out of a cut-rate zombie apocalypse thriller. With all overhead lights out and just a few crucial registers open, customers scrambled to navigate the cavernous supermarket with flashlights, headlamps and the glow of cell phones. Shelves of meat, dairy, juice and other perishables had been cleared after power was lost overnight Wednesday, following a day of hurry-up-and-wait warnings with little definitive information.

“People are saying it could be five days,” said Aptos resident Mary Jo Morris, whose nearby home also lost power Wednesday night. She left Safeway empty-handed once she realized there was little fresh produce to pick from, and was considering going to stay with her daughter who had power in San Jose. “It makes you so confused.”

The blackout stemmed from a decision by utility Pacific Gas & Electric to preemptively cut power to some 600,000 customers—which energy analysts said likely totaled over 2 million people at shared home and business addresses—in hopes of staving off potential wildfires. Around this time the last two years, deadly blazes including the Santa Rosa Tubbs Fire and Paradise Camp Fire were sparked by the company’s equipment in dry conditions and high winds, state reports have found.

By Thursday evening, PG&E released a statement that a “partial all clear” had been given for Santa Cruz County, allowing utility workers to inspect power lines for damage and restore electricity to the nearly 37,000 households impacted. Exactly where power was out at any given time was difficult to track, since the utility’s online map of outages stretching from Bakersfield to the Oregon border crashed repeatedly.

While PG&E spokespeople warned that blackouts could be part of a “new normal” as climate change fuels hotter, drier fire conditions, many questioned how the utility decided to cut the power when high winds failed to materialize in areas including Santa Cruz County.

“We were not adequately prepared,” PG&E CEO Bill Johnson said in a press conference after the blackout, which ultimately lasted about three days in some rural areas and hit poor residents and those who rely on electrical medical devices particularly hard.

On Monday, following reprimands from Gov. Gavin Newsom, the California Public Utilities Commission demanded that PG&E make immediate changes to its power shut-off strategy after its “failures in execution … created an unacceptable situation that should never be repeated.”

PG&E began warning of the unprecedented “Public Safety Power Shutoff” early last week, at one point projecting that 38 counties could be impacted. Outside of impromptu gathering places like the Aptos Safeway on Thursday, many residents said they had been told a blackout was possible, but not definitively when it would happen, leaving them to scramble to buy food, gas, generators and supplies like flashlights.

“I ran around with my headlight on last night,” said 47-year Aptos resident Joan Ercole.

The timing of the event was somewhat eerie, she added, given that the 30th anniversary of the Loma Prieta earthquake, which leveled much of the county and surrounding region, is coming up Oct. 17. Except for one key difference: “This is pretty bad, because it’s man-made,” Ercole said.

Michael Wara, director of the Climate and Energy Policy Program at Stanford University estimated on Twitter that the economic costs of the outage could total over $2 billion.

In Santa Cruz, many of Westside Hardware’s supply shelves sat empty on Thursday afternoon following a mad rush of nervous customers the day before.

Bates’ Wednesday afternoon shift was the busiest he’s seen since he began working for the Ace Hardware franchise three months ago. Some of the aisles were so jammed and crowded that he was unable to squeeze by.

The power did go out at Bates’ house in Ben Lomond on Thursday morning. Rather than turn his family’s generator on, he got dressed by candlelight at 6:30 a.m. and drove to see if power was on at the store. Thankfully, it was, since most of the city of Santa Cruz was unaffected.

Across the street, Bonny Doon resident Brian Legg was feeling ticked off while filling up four 5-gallon plastic gas tanks at the Westside Valero station on Thursday. The fuel, he hoped, should be enough to power his generator a couple of days, if needed.

Legg got a phone call from PG&E on Sunday warning him that the power may go off in three days, as well as similar calls on Monday and Tuesday. But when he didn’t hear anything on Wednesday, he figured that he was in the clear. Then, the power went off without warning.

Valero assistant manager Cypress Castorena said customers had been coming in “nonstop, like crazy,” many in need of ice and gas. Her daughter was in school at Brook Knoll Elementary, where the power was out but a back-up generator was running phones and other essential services.

Cabrillo College narrowly avoided the blackout, but UCSC cancelled classes and closed several buildings on Thursday. For much of the day, the university with just shy of 20,000 students found itself in limbo after campus power went out around 11pm Wednesday night. A cogeneration plant provided power to key infrastructure and services like the fire station, health center, several labs and science buildings, and three dining halls. But much of the campus was dark.

“We’re in the same boat as the rest of Santa Cruz,” Hernandez-Jason said Thursday, when it was unclear how long the blackout would last. Classes resumed on Friday.

Power was also out in much of Corralitos, including the corner of Freedom Boulevard and Corralitos Road.

A sign posted on the front door of Corralitos Tattoo read, “No power, no tattoos! Closed today.”

Aladdin Nursery owner Gustavo Beyer said that since he was already in the store, he planned to take advantage of the quiet afternoon to clean his shop.

Across the street, Corralitos Feed and Pet Supplies opted to stay open for customers. Owner Ely Padilla said he was going to have to manually input everything that sold that day into the store’s inventory-tracking system. “Animals have to eat like we need to eat,” he said, “so we try to do our best to make our customers happy.”

Just up the road, Corralitos Meat Market was fully prepared to withstand the outage with its military-grade generator keeping sausages, steaks and other food cold.

Market President Dave Peterson said his predecessor had installed the generator, which runs off a 55-gallon drum of diesel, after the ’89 quake.

“A lot of people came in saying the were going to a barbecue tonight since they were out of power,” Peterson said. “The only thing I can say is thank god for a generator.”

Previous ArticleWill Cannabis Growers Who Paid Their Dues Get a Fair Shake?