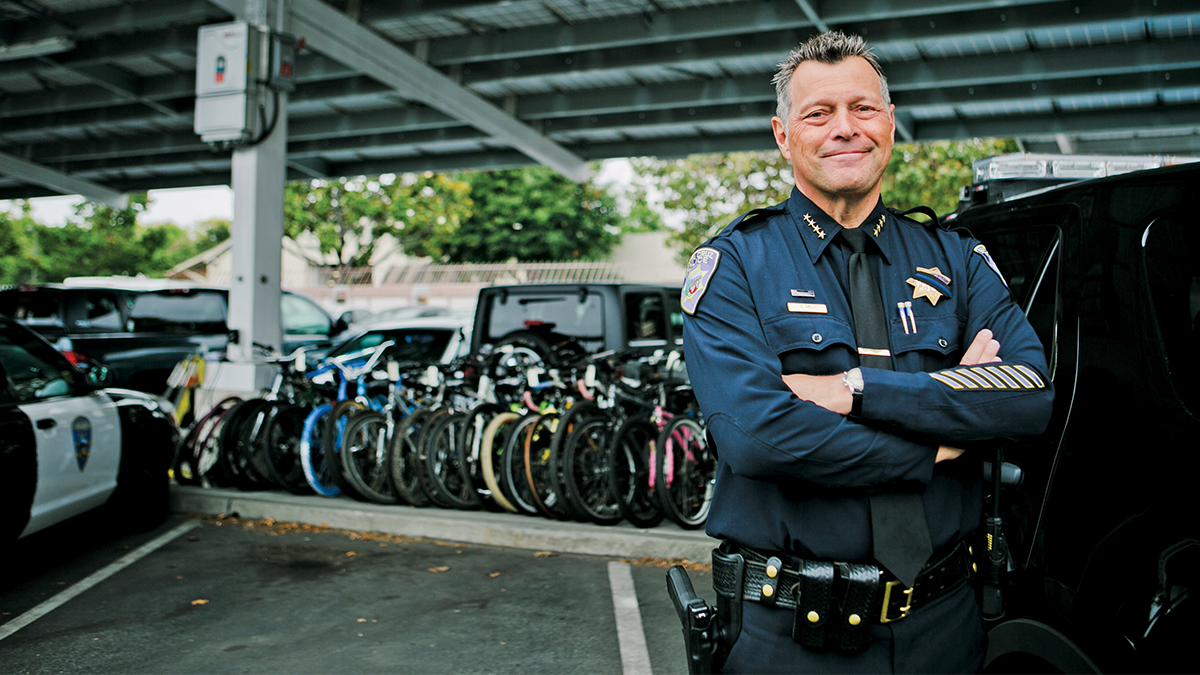 Officer Chris Galli first drew attention for a January post on a conservative Facebook page called “Santa Cruz, CA: Keepin’ It Real” when screenshots of his commentary about an African-American resident of the homeless encampment behind the Ross department store were published on left-leaning news site Indybay. In the exchange, Galli, posting as “Chris Meriekuh,” referred to camp resident and unofficial spokesman Michael Sweatt as, “Good ‘ol dindunuffin Mr. Sweatt”—a phrase used on Reddit and elsewhere after the 2014 Ferguson police brutality protests to mock African-American people who deny committing crimes.

“Yes, it has been brought to my attention, and we have initiated an Internal Affairs investigation into the matter,” Santa Cruz Police Chief Andrew Mills tells GT. “I can’t comment on the personnel investigation, but I can tell you that we take all those matters seriously.”

The investigation comes as local online political groups, a microcosm of a chaotic national political environment, continue to splinter into increasingly insular corners of the Internet. If and how local law enforcement or other employers will respond to the polarizing rhetoric is the question now confronting Mills and his department.

The “Santa Cruz, CA: Keepin’ It Real” Facebook page is billed as “a humble attempt to make sense of the chaos that is daily life in the city of Santa Cruz.” It consists mostly of detailed crime and court reports compiled by moderator “Big Joe 77,” plus Law & Order-inspired slideshows of mugshots and often-vitriolic comments about people accused of crimes. City spending on homeless services is a frequent target of posters who call Santa Cruz and its elected officials a “shitshow,” and sometimes bestow a “Jackass of the Day” award.

Mills says the police department doesn’t regularly track online posting habits of police personnel on ‘Keepin’ It Real’ or other pages. If remarks are brought to the department’s attention, as was the case with Galli, the department will investigate. “We don’t actively monitor social media,” Mills says. “There’s just so much of it. I don’t really have the staff or the ability to do that.”

The Santa Cruz Police Officers’ Association did not respond to a request for comment about whether officers’ online personas should be grounds for departmental action.

The issue of political expression among local law enforcement could be muddled by the fact that Mills himself faced criticism for uneven enforcement of department rules in his previous role as Eureka police chief. As Humboldt County media reported in 2017, Mills took issue with a Humboldt Bay firefighter wearing a “Black Lives Matter” pin on his uniform, though Mills was captured in a photo wearing a “Police Lives Matter” bracelet while on duty.

“What happened is that the city’s policy is that you cannot wear pins of any kind without prior approval from the chief of that department,” says Mills, who adds that he has also told multiple officers that they may not wear pro-Second Amendment pins or other insignias on the job. “You have to set a standard, or it gets out of control.”

As for what made his “Police Lives Matter” bracelet an exception, Mills says he was showing personal support for officers killed in a 2016 Texas ambush. And the bracelet, he adds, was not physically on his uniform.

“That is not a violation of the policy because it’s not on my uniform,” Mills says. “It was more of an issue of showing support for our officers.”

Since taking the job as Santa Cruz’s top cop in the summer of 2017, Mills has staked out a conciliatory position. In addition to championing the annual MLK Day march with the local NAACP, Mills has used his personal blog to draw attention to alleged hate crimes and civil rights milestones. In a post earlier this year titled “Words Matter,” Mills wrote that, “How we speak to one another matters greatly. People on the fringe use extreme words as justification for wrong behavior.”

Last year, after visiting a Resource Center for Nonviolence exhibition on “Black Lives in Santa Cruz: What Matters,” Mills told GT that, “We need to look at what we are doing that eliminates people of color” in public hiring.

“Me, as a white male in my 60s in government, I cannot understand what it’s like for a young African-American guy to be stopped multiple times,” Mills says. “And I don’t think that those who are not in law enforcement can truly understand what it’s like to walk up to a car when you have no idea who’s in the car at 3:00 in the morning. My goal is to bring connection and unity.”

Though he doesn’t expect questions about political expression to go away, Mills says it will take addressing underlying tension and improving a range of social and economic systems to really move the needle.

“It’s a broad topic that’s not just fixed by policing,” Mills says. “I mean, the whole system has to be changed.”

Next ArticleHow Long Until Capitola Village is Underwater?