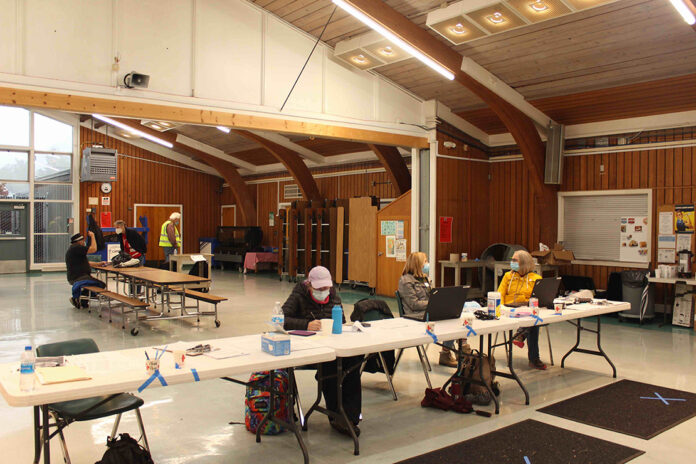 When it rains, it pours—especially in the Santa Cruz Mountains, which is designated as a temperate rainforest biome. While Southern California has dabbled in drought for years on end, the Santa Cruz region has a feast-or-famine approach to rainfall in the winter months. The feast arrived over the weekend of Oct. 23 and 24, dousing the area with much-needed moisture while amplifying fears of the potential for debris flow activity.

Debris flows occur when heavy rainfall triggers a landslide that picks up trees, vehicles and homes in a violent, fast-moving wall of detritus. After a treacherous fire season in 2020, the San Lorenzo Valley’s denuded mountains, downed trees and steep terrain created the perfect storm for a debris flow event.

By the end of the onslaught, rain totals exceeded seven inches in Zayante, and Ben Lomond Mountain recorded 9.63 inches of rainfall within 48 hours.

Preparation for potential debris flow activity was front and center in the San Lorenzo Valley’s first responder community, as the incoming “atmospheric river” was slated to bring upwards of 8-10 inches of rain to the mountains. In preparation for the storm, Santa Cruz County officials ordered some 300 addresses throughout the Santa Cruz Mountains to evacuate early on Oct. 24.

Fortunately, the debris flows never materialized and residents were allowed to return home the following day, but local fire departments were ready for anything.

Along with Ben Lomond Fire Department Chief Stacie Brownlee, Assistant Chief Mike Ayers had his team on high alert in response to the impending storm.

“All of our assets were staged at the fire department. We were monitoring the burn scar area and various creek drainages,” Ayers said. “Streams were running clear and didn’t approach flood stage, and we understood the difficult decision made [by the Office of Emergency Services] to upgrade the evacuation warning to an order.”

Sheriff’s Office spokeswoman Ashley Keehn said that agency shared information through its social media, CODE Red (the emergency evacuation and notification system) and by going door-to-door for those in the impacted zones on Oct. 23.

“Roughly one-third of those we spoke to in the impacted areas said they would evacuate with two-thirds chose to stay,” she said.

Ayers highlighted the delicate dance necessary to keep the public informed and safe, noting that an order to evacuate can lead to frustrated locals who return to no damage, while a warning may not be enough in the event a debris flow occurs.

“Moving ahead, all involved agencies need to work very closely with weather services and the county geologists to make the appropriate call and get as much information out ahead of time as possible,” he said. “Local fire and operational chiefs attended an educational forum with local real estate professionals regarding both wild land fires and potential debris flows. Sharing that information with the public could be beneficial in getting the educational part out to residents.”

Ayers said that the department responded to a number of calls for assistance over that weekend: trees and wires down, localized flooding, one kitchen fire and a handful of medical emergencies.

The countywide response, said Ayers, was an appropriate one.

“Until we have some significant regrowth within the burn scar and potential debris flow impacts are lessened, we will need to act in the best public interest ahead of time, rather than playing catch-up or reacting to an incident after it has occurred,” he said. “When an evacuation order is issued, we would like people to comply rather than to stay. Knowing how responding agencies make those decisions will help the public to understand the actions we are taking.”

Boulder Creek Fire Protection District (BCFPD) Chief Mark Bingham also had his crew at the ready when the rain came rolling through.

“We staffed four engines—two of them were high water vehicles—and provided sand bunkers and sandbags (approximately 30 tons of sand, and 1,000 sandbags) that were supplied by the county,” he said.

Ultimately, the preparations were largely unneeded, but, Bingham said, appropriate given the warnings that were emanating from the weather service.

“The response planning was well coordinated and appropriately staffed,” he said. “Of course, we dodged a bullet and did not need to engage any equipment or personnel for anything out of the normal for a Boulder Creek winter storm.”

Above all, local authorities reiterated the need for residents to abide by evacuation orders for their own safety.

Future storms may yet metastasize into an atmospheric house of horrors for the region, so county personnel are still advising caution as the rainy season kicks in by encouraging residents to have a family emergency plan, a disaster kit, and a cell phone registered with Santa Cruz Regional 9-1-1 to receive reverse emergency notifications. In addition, evacuation zones were updated earlier this year, and it’s important for residents to know their zones in the event of an emergency. To find yours, visit scr911.org/general/page/know-your-zone.

Next ArticleSecond Harvest Kicks Off the 2021 Holiday Drive