.Smoke and Blues at Aptos BBQ 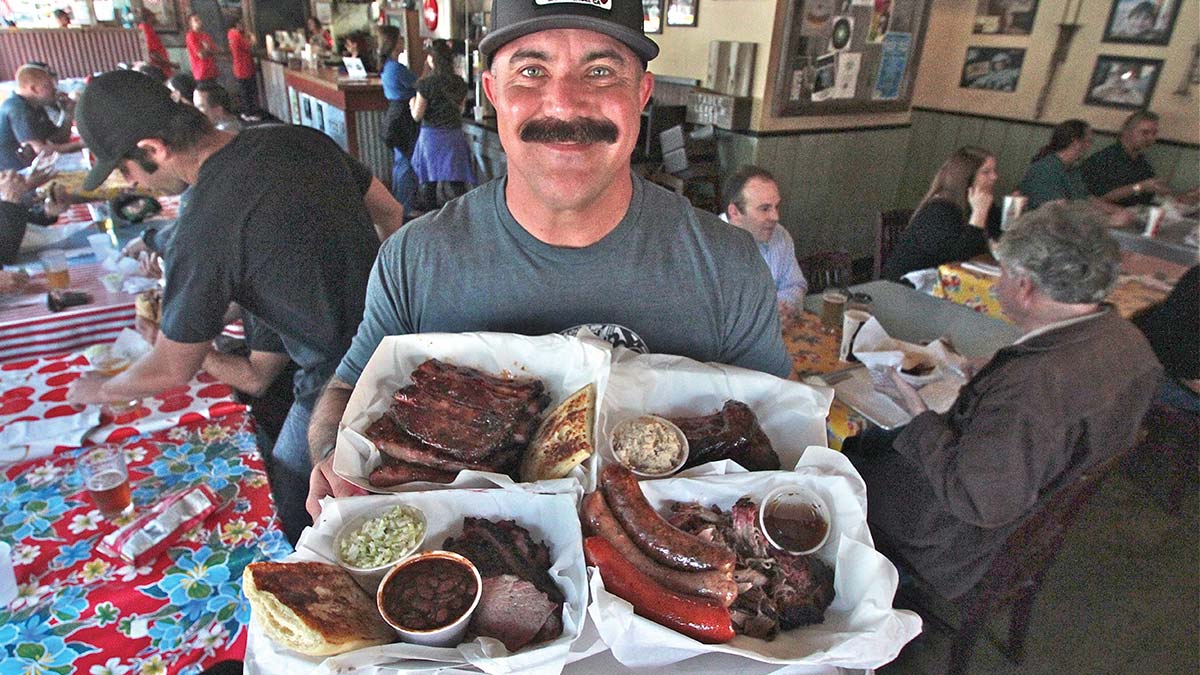 Barbecue. The word alone can provoke intense salivation—or, if mentioned to the right person, detailed explanations of 20-hour cooking techniques. Santa Cruz County is fortunate to have its fair share of barbecue joints, including Aptos St. BBQ, which is owned by the same folks who own Mission St. BBQ and a handful of others in Silicon Valley. We caught up with co-owner Larry Ingram to ask him what makes Aptos St. unique in the vast landscape of barbecue.
Tell me a little about your barbecue style, and how that translates into the flavor, texture, etc.
LARRY INGRAM: We definitely go with the traditional smoke barbecue. It’s all wood fire, slow-cooked at a very low temperature. Everything’s cooked for hours and hours. The brisket takes about 22 hours. The pulled pork takes anywhere from 15 to 20 hours. I would say while our style is a traditional smoke method, we very much like to claim our California region. People like to say their barbecue is Texas style or Southern style. We’re a mixture of all those things. Our pork is kind of Southern style. Our brisket is cooked more of a Texas style. We also serve a lot of tri-tip. That’s a cut you don’t find anywhere but California.
What’s the 831?
It’s a collaboration we do with El Salchichero and Sante Adairius. We combine their sausages with some 831 IPA, and that’s Sante Adairius, which is a well-known local brewer. We smoke the sausages and sell it exclusively at our location. We recently added a jalapeño version. The sausage is made with smoked pork, cheddar cheese and the 831 IPA. The jalapeño one has got some kick. I think the high malt content of the IPA gives it a little sweeter taste. It’s kind of a sweet, savory sausage.
You’ve also been a big supporter of live music.
Aptos is where we first started the live music. It’s a free thing. We started the day of the blues festival in 2009. We didn’t do seven days a week until about one to two years into it. I’ve carried that theme over to Mission St. BBQ. There is a local rotation going on. We also inject acts from outside the area. We get some pretty stellar acts. Kim Wilson would be a big name—he was the lead singer, harmonica player for the Fabulous Thunderbirds. He comes in frequently. Rick Estrin is another big-name harmonica player. He’s local now, but he’s originally from the Chicago area. The other big name is Mark Hummel. One up-and-coming youngster is Big John Atkinson. He’s got a voice that’s very reminiscent of a lot of the older artists, like Howlin’ Wolf, Muddy Waters. He’s like a combination of a lot of these guys.

Next ArticleReal Mongolian at Oyunaa’s