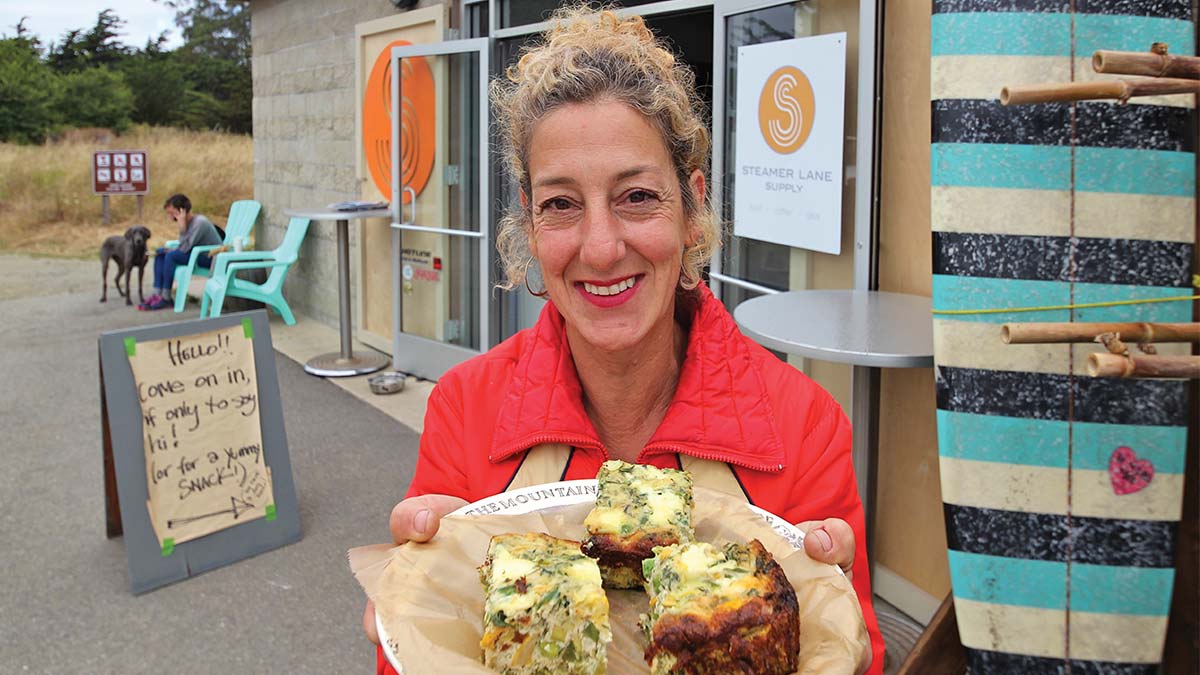 Spending hours on the water, pounding board against wave, is an exhausting sport. Since burritos are not yet waterproof, finding a seaside snack can be a challenge.
But those catching a wave at Steamer Lane off West Cliff now have a quick fix for that problem. Fran Grayson, known for her Truck Stop food truck, recently opened Steamer Lane Supply, a café-and-supply store by Steamer Lane. The café will serve food, and on the weekends Truck Stop will be parked there, too, for even more bites. In order to help keep the beach pristine and safe for wildlife, Grayson has gone to great lengths to avoid selling anything with plastic or unsustainable products.
Is Steamer Lane Supply more of a café or a surf shop?
FRAN GRAYSON: It’s a café that has beachy things, like wax and leashes and emergency things people would need, sunscreen, stuff like that. I also have my own line of apparel. I’m also selling shirts and hats made by other people, primarily local surfers. This whole thing started with me surfing, and being hungry when I got out of the water. I had so many conversations with people saying, ‘Gosh, I wish there was some food out here so I could eat something and keep surfing.’
Do you cater your menu to hungry surfers?
Yes, definitely. And to all of the people that use that same space; exercising, dog walking, tourists. We’re doing the poke bowl because it’s quintessential surf food, and quesadillas because people can walk with them. I even make food for the dogs, too. You can buy a slice of doggy frittata, which has meat and eggs and rice and cheese in it.
What’s an arepa?
It’s a Venezuelan and Columbian dish, a corn cake that’s grilled and split open and stuffed with whatever kinds of things you want. It’s much different from a tortilla because it has more of the consistency of grits, and it’s crispy on the outside. It looks about the size of an English muffin, a little bigger. The most you can say about them is “coming soon.”
What other kinds of food do you sell?
We make a range of kind of unusual quesadillas with various fillings. it’s folded and tucked, sort of like a flat burrito, but we like them better because they’re really crispy on the outside. We have some really good hot dogs. 4505 Hot Dogs. [They] come from San Francisco, and they have bacon inside. It’s really good. We make homemade eggrolls. We make ‘grab ‘n’ go’ sandwiches. We also sell pastries and donuts. The truck is doing fish tacos and burgers mainly right now, and will transition to arepas soon.

Next ArticleVenus, Evening Star, Calling Us to Vespers