.Steel House and the Trouble With All-Star Ensembles 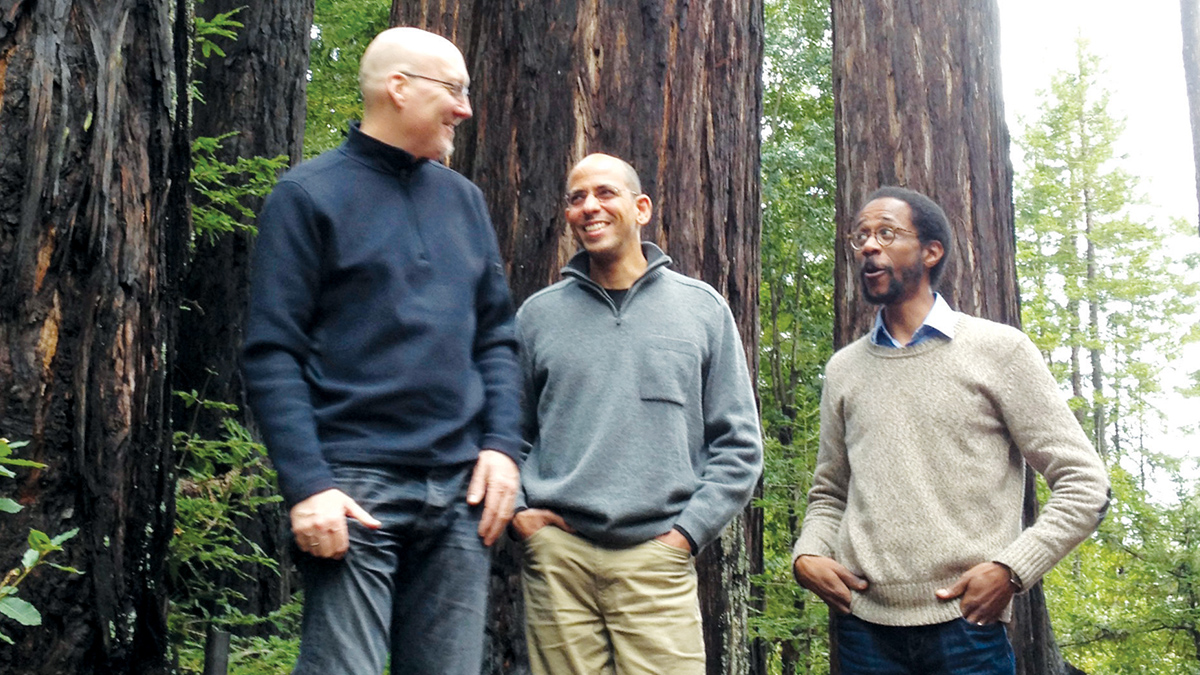 While Steel House’s 2017 debut album was quickly deemed an artistic triumph that expanded the possibilities of jazz, the trio’s greatest accomplishment may have been the sheer feat of logistics it required to get the musicians in the same place at the same time.

Featuring Venezuelan-born pianist Ed Simon, bassist Scott Colley and drummer Brian Blade, Steel House brings together three of jazz’s most sought-after accompanists. The trio performs Thursday at Kuumbwa, part of a rare spate of gigs before they hit the studio to record their second album.

It’s not that they don’t get to play together often. Over the past 25 years, they’ve all worked and recorded together in various combinations, both on their own projects and with other storied bandleaders’. A superlative rhythm section tandem, Blade and Colley are founding members of Joshua Redman’s Still Dreaming, and Simon and Colley have performed widely with guitarist Adam Rogers and saxophonist David Binney. But the three musicians all together, with time to focus, therein lies the logistical feat.

After a brief series of gigs led to the first Steel House recording session in Sonoma, “We just haven’t toured much since then,” says Simon. “We would love to be playing together more often, but everyone is so busy. We have to plan way in advance in order to get together for two weeks.”

The creative groundwork led Simon, Blade and Colley to seek out a new context for their collaboration where they could cultivate “a certain aesthetic, a sensitivity and melodic sense the three of us gravitate toward,” Colley says. “We’ve played so much as a rhythm section for other musicians and composers. We wanted to get together to explore the different textures and things that we gravitate towards instinctively. One of the things for sure is a real melodic sense, and a degree of patience that I see in Edward and Brian.”

Rather than adding another piano, bass and drums trio into the jazz mix, Steel House has turned into a home for lyrical compositions that often feel like fleshed-out songs more than jazz tunes. Simon artfully contributes keyboard textures, subtle production touches that accentuate the music’s lithe lyricism without weighing it down.

“We’ve played at the Village Vanguard and did it completely acoustic, so we can go in that direction,” Simon says. “But when you hear the record, you can hear we’re writing songs, a little more produced. Not pop production, but definitely that element. I think we’ll continue that direction on the next record.”

Steel House is the latest destination for Simon, whose epic musical journey started in 1984 at the age of 15, when he left his home in Punta Cardón, Venezuela, and moved by himself to Pennsylvania. His father, philosopher Hadsy Simon, thought his music-loving middle son’s best chance to thrive was in the U.S. Enrolled at the Philadelphia Performing Arts School, he discovered jazz, and eventually connected with Philly masters bassist Charles Fambrough and guitarist Kevin Eubanks, who encouraged the young pianist’s move to New York.

Landing in Manhattan in 1988, Simon quickly established himself as an essential new voice through touring and recording with altoist Bobby Watson and trumpeter Terence Blanchard. At the center of a wave of brilliant Latin American musicians who transformed the New York scene in the 1990s with influences beyond Cuba and Brazil, Simon recorded a series of acclaimed albums documenting his ambition as a composer.

Named one of the best releases of the year in the NPR Music Jazz Critics Poll, Simon’s latest album, 2018’s Sorrows & Triumphs, features his quartet Afinidad with Blade and Colley, and the Imani Winds, an exploratory quintet known for collaborations with jazz masters Wayne Shorter, Paquito D’Rivera, and Jason Moran. Steel House offers a very different path, avoiding the tropes and forms that define so many jazz trios. Rather than focusing on accompaniment, Colley often takes the lead. And instead of a theme followed by a string of solos, the music unfolds via extended ensemble passages that barely require solos at all.

“You start to feel confined by those roles and categories,” Simon says. “After a while you outgrow them. You want to be free to do something completely different. There should be space for all of that.”