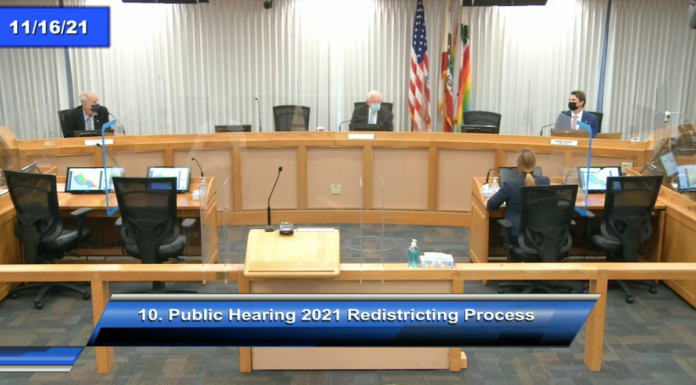 The Santa Cruz County Board of Supervisors on Tuesday approved a plan to redistribute some 3,400 residents—the majority in the northern reaches of the county—as part of the county’s decennial redistricting process.

Under the plan, 491 people in Watsonville’s Apple Hill District will shift from the 2nd to the 4th District, and 613 people will move from the 3rd to the 1st District in the area of Brommer Street and East Harbor.

The city of Scotts Valley, which was split along Highway 17 during the previous redistricting one decade ago, will be “reunified,” shifting 2,300 people from the 1st to the 5th District.

Under state law, jurisdictions must redraw supervisorial boundaries every 10 years using data from the recent census to make the populations equal in each district. When doing so, jurisdictions must, when possible, keep “communities of interest” together, and typically use boundaries such as rivers, streets and highways.

A community of interest is a group of residents with a common set of concerns that may be affected by legislation. That includes ethnic, racial, and economic groups, among others.

The county this year was tasked with redistributing its 271,350 residents.

While the shifts in Watsonville and Santa Cruz garnered little discussion during public comment, the proposal to reunify Scotts Valley did. That proposal came forth during the previous board of supervisors meeting on Nov. 9 in a letter from Scotts Valley Mayor Derek Timm that was forwarded by 2nd District Supervisor Zach Friend.

Timm says the split was confusing for the small city of roughly 11,000 people, which had its own police and fire department boundaries, as well as water and school districts, but shared two supervisors.

“We were split and we felt disenfranchised,” he told the supervisors Tuesday. “What happened 10 years ago can be corrected.”

The new map passed 3-2, with Supervisors Ryan Coonerty of the 3rd district and Bruce McPherson of the 5th district dissenting.

That decision largely rebuked several months of public meetings, research and deliberation conducted by the Santa Cruz County Redistricting Commission that began in earnest in September.

McPherson, who made a failed motion to support a plan that included the changes in Santa Cruz and Watsonville but not in Scotts Valley, said that all the unincorporated parts of the cities in the county are currently represented by two supervisors.

“The commission is recommending continuing that structure, which has always worked well in my opinion,” he said.

Coonerty said that Timm’s proposal was done properly and reflected his desire to support the city, but said he wanted to follow the commission’s recommendation.

“At this point, in order to have a smooth process, and continuity and fair treatment as all the cities have in our community, I’m supportive of the commission’s recommendations,” he said.

McPherson also said he wanted to support the recommendation of the commission.

“I think the commission’s process of analyzing the census data and considering the public’s input and reviewing the various options really needs to be respected,” McPherson said.

Timm was slammed during the public comment portion of Tuesday’s meeting for presenting the issue at the “last minute” of the redistricting process.

“What happened last week was blatant politicking,” said Coco Walter, a Ben Lomond business owner. “Mayor Timm jumped straight to the front of the line … that just reeks of entitlement.”

Ben Lomond resident Jayme Ackemann said that, while redistricting, the city of Scotts Valley should not be viewed as a community of interest, and added that a petition opposing the reunification garnered 229 signatures in San Lorenzo Valley. That petition claimed that Timm’s proposal was politically motivated and would further weaken the San Lorenzo Valley’s say in county decisions.

Danny Reber, a Scotts Valley resident and the executive director of that city’s chamber of commerce, said that the split a decade ago came despite public outcry from the city.

“In my opinion, it was a travesty and an injustice when our community was split,” he said.

After the vote, McPherson said that he hoped “Scotts Valley and San Lorenzo Valley can find a better way than in the past to get together.”

Next ArticlePoetry Event Stopped After ‘Zoombombing’