.Tammi Brown and All the Things We Are 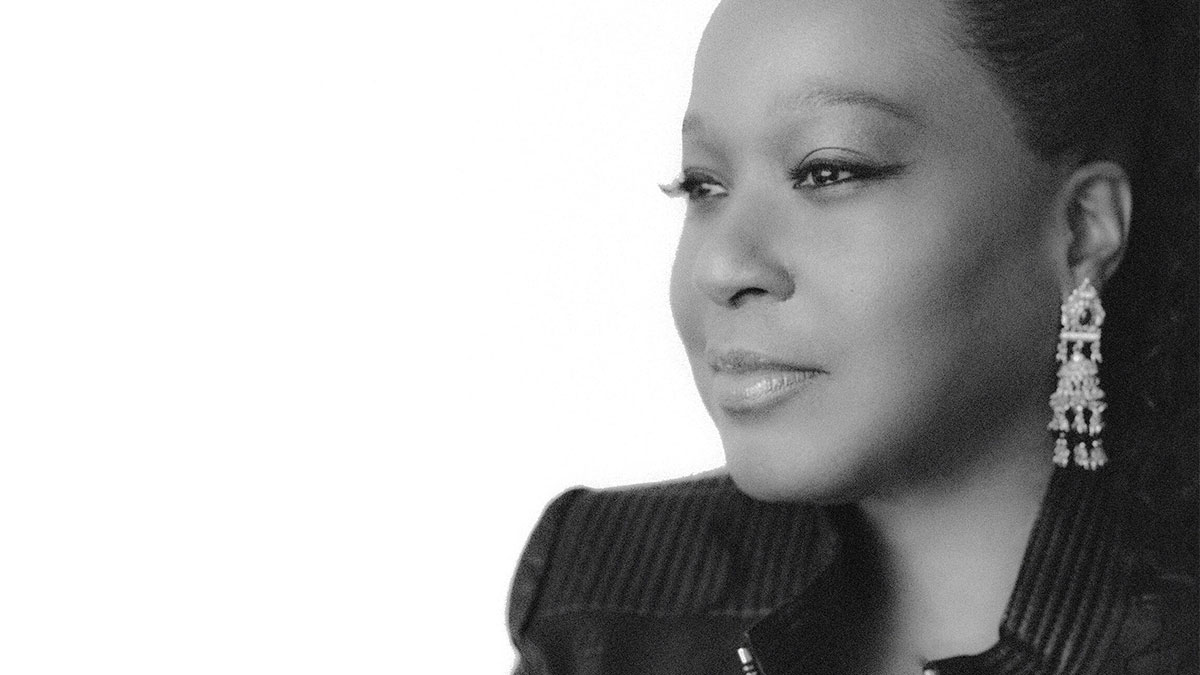 A 4-year-old girl sits in the dark of the walk-in closet, pressed tightly against her mother and her aunt. The two women and the child are trying to keep quiet, but that task is made all the more difficult by the portable radio they have with them, which is pouring out the bounty of post-Motown black pop music of the ’70s: soul, funk, R&B, jazz.

This little rendezvous in the closet carries a bit of an illicit thrill, and the girl can feel it. Her father, a devout man of god, would strongly disapprove of what was going on there. He loved music—40 years later, his daughter would say that he had a beautifully supple singing voice not unlike Nat King Cole’s. But in his mind, music was either in the service of heaven or of hell. Whatever was coming out of that radio was surely the devil’s work.

“My dad didn’t want secular music in the house,” says Tammi Brown, that wide-eyed girl in the closet. “But my mom and my aunt were like, ‘Aw, hell, no. She has to have this music.’ And I would just absorb it like a sponge.”

Brown’s stories about her childhood are much like this, her earliest memories shaped against the backdrop of a rich musical life. In fact, her mother and her aunt weren’t the only ones in the family undermining her father’s prohibition of godless music.

Around the same time, a great-uncle took an interest in the child’s obvious musical abilities. “He kind of stopped me one day when I was visiting my great grandmother, and said, ‘Let’s see if you can sing something like this.’” Then, he put on an Ella Fitzgerald recording of the old Jerome Kern song “All the Things You Are.”

In 2019, a lifetime later, Brown found herself in a recording studio, again singing “All the Things You Are,” a song that is as deeply in her bones as any other. The Santa Cruz-based singer is part of an ambitious jazz collaboration with Oakland lyricist Albert Greenberg and composer Dan Zemelman titled The Lost American Jazzbook. The theme of the album is the creation of new, original songs to revive the canon of American jazz standards, to shake off the nostalgia inherent in the term “jazz standards” and make new songs for new circumstances.

And yet, in a project laser-focused on new material, Brown is recording a song she first learned at 4 years old.

“It’s on the album because Albert heard me sing it,” says Brown.

“Every 4-year-old in the country should be singing that song,” says Greenberg.

Taxonomy of Pleasure: The Lost American Jazzbook II was released last August with a memorable performance at Yoshi’s in Oakland. Of the album’s nine tracks, seven are new originals, the exceptions being the Kern song and a cover of Bob Dylan’s “Subterranean Homesick Blues.”

Jazz standards, often defined as “The Great American Songbook,” make up a beloved legacy of American music. But they are almost always associated with the past.

Greenberg is a veteran of music and theater, as well as the co-director of the Oakland nonprofit Black Swan, which produces experimental and socially conscious performance art. He rebels against the idea that all the great jazz standards have already been written. He took it upon himself to add to the canon.

“I did it because I just got tired of hearing ‘My Funny Valentine,’” he says.

The Jazzbook concept predates Greenberg’s first encounter with Brown. The first album in the series was released in 2014 with a different singer. And though it was met with some acclaim (including Jazz Vocal Album of the Year at the Independent Music Awards), the project stalled because the collaboration wasn’t quite what the composers expected.

Greenberg and Zemelman spent two years looking for a vocalist to continue the Jazzbook series. Greenberg called up Bay Area musical legend Linda Tillery to measure her interest in taking on the project. Tillery declined, but pointed to her friend Tammi Brown, a member of Tillery’s Cultural Heritage Choir, who was hiding in plain sight down in Santa Cruz.

“I just felt tapped out of names at the time,” says pianist Zemelman. “I know almost all of the musicians in the Bay Area, but Santa Cruz, honestly, is kind of like another world. It doesn’t always cross-pollinate.”

For 20 years, Brown has been one of the most prominent faces on the Santa Cruz music scene. She has performed in a variety of venues in everything from formal concerts to fundraisers. She was nominated for a Grammy for her work with jazz guitarist Stanley Jordan (who guests on Taxonomy of Pleasure), and she has performed alongside such giants as Maya Angelou, Joan Baez and Quincy Jones.

Still, to Greenberg and Zemelman, she was a revelation.

“We just couldn’t move forward until Tammi came along,” says Zemelman. “And then, all of a sudden, she was the missing component that we needed, which was a phenomenal front person. Tammi did so many things. She’s super charismatic and an amazing singer. She knows how to woo an audience, plus she has business savvy and lots of connections. All of her talents put together felt like a superpower.”

As a vocalist, Brown finds the wistful soul behind such songs as “Without You” and “Free Fall,” the latter a graceful piano ballad in which she pronounces at the beginning the definition of the melancholic, uniquely Brazilian concept of saudade as “the presence of absence.”

Elsewhere, though, she makes a bold step in adventure. The cover of the Dylan song—known for its timeless line, “You don’t need a weatherman to know which way the wind blows”—was combined with a melody cribbed from another inscrutable genius, pianist Thelonious Monk.

“There are so many words,” says Brown of the Dylan song. “You have to really watch your breathing. I had to get to the gym so I’d have the stamina for that one.”

“At first, I was uncomfortable when I read the lyrics,” Brown admits. “I was like, ‘You guys understand I am black, right? You want me to sing this in a roomful of people?’”

As the song’s writer, Greenberg says the lyrics reflect a cultural void.“We live in such crude times,” he says. “I wanted to talk about the endless crudeness of our culture. It’s now gotten to the White House, so it’s as if it’s lost its potency. It’s not that it’s always wrong. It’s that it’s empty.”

Brown took on the song by researching the work of mid-century black writer Baldwin in order to find a voice of black resistance that all people could understand.

Race consciousness is an ongoing journey for Brown, who grew up in the predominantly white Peninsula community of Los Altos Hills, where she was often one of maybe two or three black students in her entire school. At the same time, she had a strong connection through her family with predominantly black churches in the East Bay.

But her parents never instructed her on the civil rights struggle. “I didn’t even know about slavery until junior high school,” she says. She had to confront race as a young girl through music. She grew up with the upbeat and buoyant black gospel of Kirk Franklin and Walter Hawkins.

“My immediate family, they weren’t telling us anything about slavery,” she says. “So as a little kid (in church), I didn’t really understand all the moaning and travailing up on the altar. All that stuff seemed crazy and ridiculous, and it wasn’t my favorite part of the service. I didn’t understand it because I didn’t know where it came from.”

What she did understand was the clear demarcation line her father had drawn between the godly and the secular. Brown’s aunt, the one who shared her love of music in the walk-in closet, was an accomplished singer who even opened once for Sammy Davis Jr. “She grew up in the church,” says Brown, “but she sang secular music. So in the eyes of the church, she was going to hell, and she was never asked to sing at the church.”

Still, the girl was entranced by secular music. She remained deeply tied to her gospel. But she was also a kid, and like many others, fell in love with pop music.

“My whole life and ambition was to be Chaka Khan,” Brown says of the charismatic front woman of 1970s funk band Rufus. “I loved the power of Chaka Khan. That’s who I wanted to be.” At the same time, through her church, she got to see some of the big names of the era—Peabo Bryson, Cissy Houston—up close singing at church conventions.

Brown’s mother, herself a fine singer and piano player, was Brown’s link to the greater world outside the church. But when Tammi was 14, her mother died. “Everything fell apart,” she says. “My dad remarried someone else. None of us ever really recovered from that.”

Brown discovered Santa Cruz in the 1990s, when she began to sing with the late Sista Monica Parker’s band the Essentials. Parker, who died of cancer in 2014, had a similar orientation to African-American music, embracing both Saturday night secular music and Sunday morning gospel (Parker’s love always followed the blues, while Brown is more comfortable with jazz).

Since then, Brown has made Santa Cruz home, and she’s become a touchstone of the local music community, rarely saying no to a local performance, while at the same time trying to reach beyond Santa Cruz to make a living as a musician. (The old family dynamic persists; a few years ago, when Brown was performing with Stanley Jordan at Yoshi’s, her father, now in his 80s, made a rare appearance at the show. According to Tammi, after the show, her father said to her, “All these people are going to hell, and you’re leading the way.”)

Taxonomy of Pleasure represents a new triumph in Brown’s career. She’s found two collaborators in Greenberg and Zemelman who see her versatility and appreciate her chops. She’s engaged in creative, even risky material. The three collaborators said that 2020 will mark another go at a recording of original material in the jazz standards idiom, with probably another performance at Yoshi’s.

“We think we can get this stuff into the concert world,” says Greenberg. Wherever it takes him, Greenberg says he wants to do it alongside Brown. “We were rehearsing a tune not too long ago,” he says. “I’m in Oakland. She had come from two hours away. She had a session the night before, a rehearsal before she came, and she had another rehearsal to go to later. She was just exhausted. But she comes in, and right when the music started, she just goes there. She really is an artist.”

For Brown, the ability to engage with music comes from the seeds planted in church pews, as well as in her mother’s walk-in closet.

“Anything I sing is going to come from inside my heart,” she says. “Even when I was a little kid, music was a source of healing, a source of deliverance, a source of power. When I was little, a woman named Tramaine Hawkins came to our church. It was the most beautiful and powerful thing I had ever heard, and I told my mom, ‘I want to sing like that.’ And she said to me, ‘All you have to do is open your mouth and let God.’ And days on end, I was walking around the house with my mouth open, saying to my mom, ‘When’s God going to send it out?’ And I learned then, that when you create sounds, he’ll take over.”