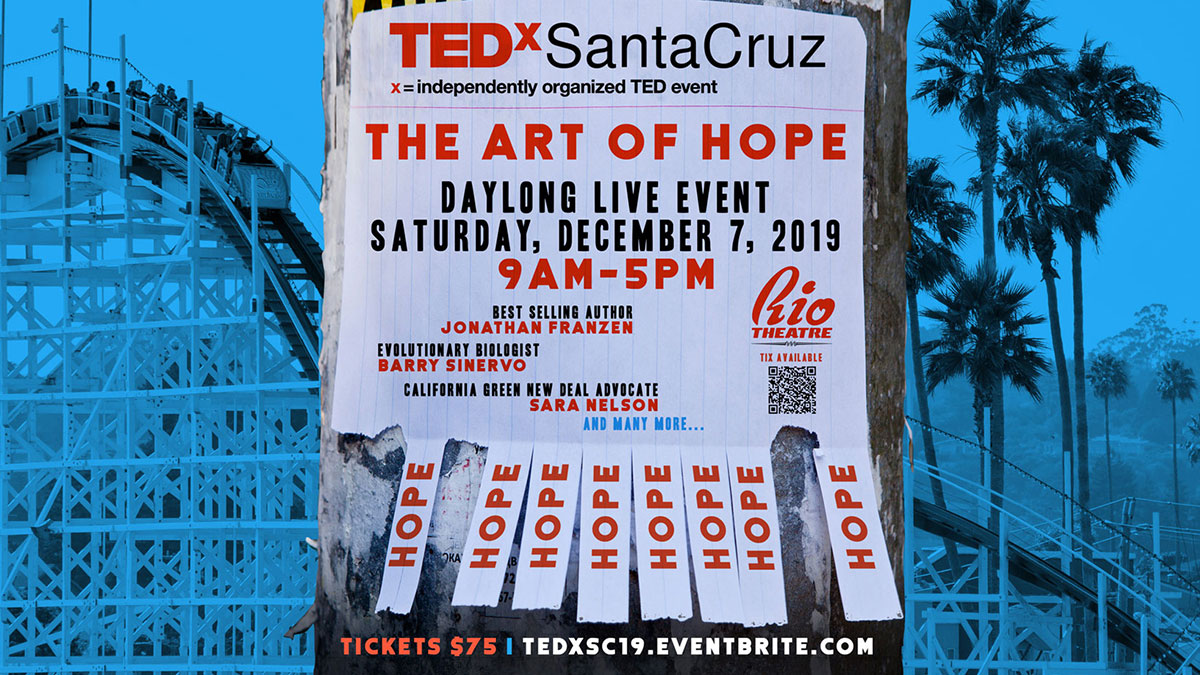 Another decade is drawing to a close and, to paraphrase a famous ’80s pop song, the future’s so dark, I gotta wear a headlamp.

An economy on a high wire, a political system teetering on collapse, a social-media hellscape and, most terrifying of all, a looming climate catastrophe that has triggered shock waves of anxiety and depression for almost anyone paying attention. At the end of that road is despair.

As if to provide a U-turn from that inevitability, more than 20 speakers will gather at the Rio Theatre in Santa Cruz on Dec. 7 in a TEDx presentation called The Art of Hope. The day-long event is designed not as a pep rally or a revival meeting, but as a sober and realistic assessment of how to meet the challenges of the moment.

TEDx is an independent and regionally based offshoot of TED, the well-known lecture format centered on “ideas worth spreading.” In this case, those ideas deal with community engagement and political activism in the face of climate change and other looming threats.

Among the speakers at the event will be novelist Jonathan Franzen, who captured the tone of the debate about hope and climate change in a recent New Yorker piece titled “What If We Stopped Pretending?” Also on board are bestselling writer Lara Love Hardin, County Supervisor Ryan Coonerty, UCSC evolutionary biologist Barry Sinervo, and activist Sara Nelson, the co-founder and executive director of the Santa Cruz-based Romero Institute.

Nelson, who has been organizing and mobilizing on social justice issues for 40 years with the Christic Institute, will focus her talk on ongoing activism to address climate change, specifically the outline of the proposed California Green New Deal, which her organization is helping to sketch.

“I’m very concerned about this issue of despair and hopelessness, inaction and apathy,” she says. “I’m seeing it in people I talk to. And as the climate impacts continue to escalate—and they will—people are going to get really rattled.”

The only way to escape that despair and the tragic consequences of apocalyptic climate change is, says Nelson, to engage in focused, energetic, determined activism. The goal of the California Green New Deal, she says, is to work on both ends of the spectrum, drafting legislation at the state level and doing community activism on the grassroots level.

“We have to get together and we have to do this,” Nelson says. “I have a deep faith in the American people being able to do things like this. What’s that old saying? Americans are like a sleeping giant. If they wake up, watch out, because they’ll get it done.”

Coonerty, a former Santa Cruz mayor, hosts a podcast called An Honorable Profession that talks to prominent political leaders on the local and state level. His talk at the event will aim to convince people that while national politics seem to be little more than a chaotic food fight, politics in cities, towns and counties across the country are experiencing something of a Renaissance.

“The strange thing is that while things are deteriorating at the federal level, it’s created an opportunity, and a necessity, for local governments to step into the void of leadership,” says Coonerty. “And many people are. That’s a good story that needs to be told.”

The news media, focused on conflict and controversy, is generally not telling the stories of people at lower levels of government working for positive change, says Coonerty. Dismissive attacks on Democratic presidential candidate Pete Buttigieg for his role as mayor of South Bend, Indiana, he says, tend to overlook political reality.

“Most people in the country live in a place like South Bend,” he says. “Regardless of how the election turns out, I hope people recognize that those places are where the election and policies are going to be won or lost.”

Barry Sinervo, who has presented at TEDx before, has been intimately facing the questions of existential hope and despair on two fronts. As a biologist studying lizard populations around the world (he’s known at UCSC as “Doctor Lizardo”), he has seen mass extinction up close and harbors no illusions about its devastation. For the past four years, he’s also been battling an aggressive form of cancer that has brought him face to face with his own mortality. Despite his struggles on both fronts (or maybe because of them), he’s also been doing stand-up comedy on the side.

“I used to think tragedy and comedy were opposites,” Sinervo told me the day before he was to endure his 13th cancer surgery. “They aren’t opposites. That’s very clear to me now, having gone through the global catastrophe and my own. It’s out of tragedy that we gain hope. I really do have hope to see the carbon curve bending, flattening, and then go down, if I live to see it.”

Next ArticleNuz: Is the ‘Sentinel’ Messing with Us?