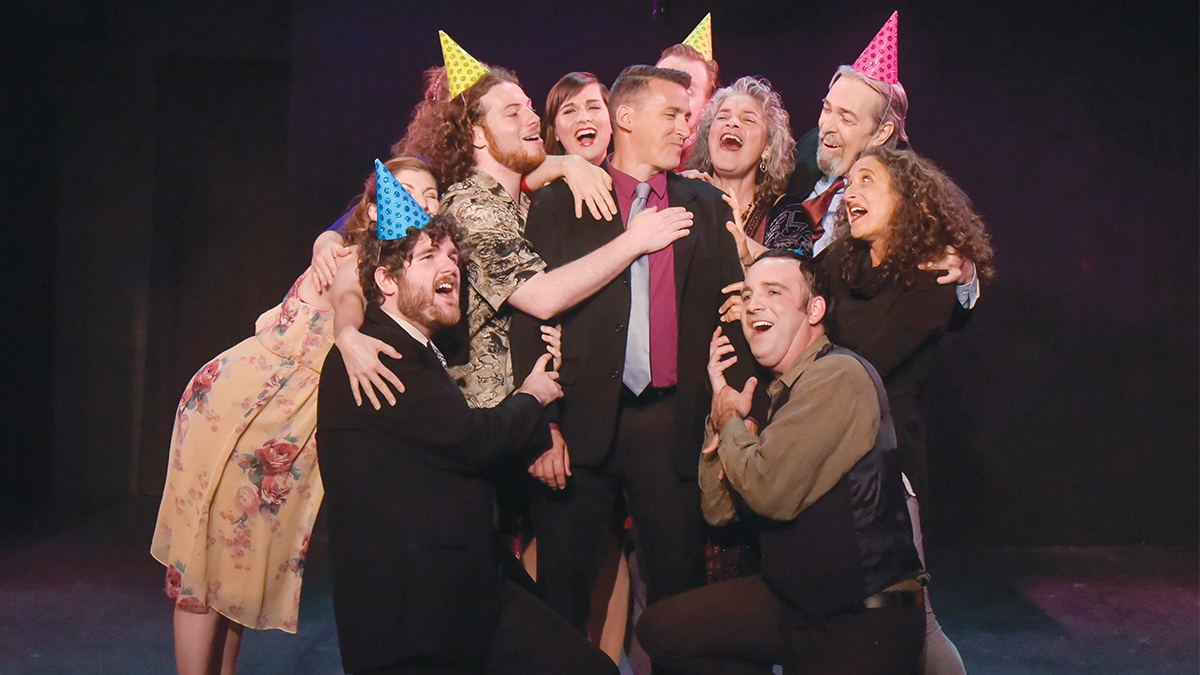 The poster says it all. The new Actors’ Theatre production of the Stephen Sondheim musical Company is advertised with the symbol for wifi superimposed over an image of the New York City skyline, all under a lyric from the show: “You haven’t got one good reason to be alone.”

This adds an extra thematic dimension to Sondheim’s story of a 35-year-old bachelor harassed by his married friends to take the plunge into the joys of matrimony—and all the baggage that comes with it. Originally produced in 1970, the show is cleverly updated to the digital age by director Andrew Ceglio, who ponders the very notion of connection—like, with another actual person—in this selfie era, when every private experience is recorded, Instagrammed and shared.

That’s the subtext, with characters whipping out their phones at every turn to snap pics of each other or play back their messages while life marches on around them. But Ceglio and his crew also score points the old-fashioned way in this splendid production, with a strong cast of singing actors and a minimalist, almost non-existent set (by MarNae Taylor) that gives them all plenty of room to move, sing and kick up their heels.

With a book by George Furth on which to hang Sondheim’s music and lyrics, the show begins with a birthday party thrown for singleton Robert (Bobby Marchessault) by the five married couples who are his best friends. They all insist it’s high time for Robert to settle down and find a wife, despite the often-uncertain nature of marital bliss in their own lives. The story proceeds through a series of vignettes in which Robert hangs out with this or that couple, observing their relationships.

Easygoing Harry (David Jackson) has been on the wagon for a year, while his intense wife Sarah (Anya Ismail) denies herself forbidden foods—like the brownies she rhapsodizes over in such orgasmic detail. So they take out their frustrations on each other when a playful karate demonstration turns combative. Much-married Joanne (a terrific Lori Rivera) drifts through their freeze-frame chokeholds and hammerlocks to sing the ironic ditty, “It’s The Little Things You Do Together.”

Robert smokes dope with David (Benjamin Canant) and Jenny (Eleanor Hunter), a self-described “square,” whose belated reaction to the drug leaves the men (and the audience) in hysterics. Peter (Alexander Garrett) and Susan (Melanie Olivia Camras) have secured a terrace apartment with a great view, but are contemplating divorce to simplify their lives.

Meanwhile, three women Robert is dating parade in and out of the action. April (Sarah Kauffman Michael) is a “dumb” stewardess who shares the wistful “Barcelona” duet with Marchessault. Feisty Marta (Brittney Mignano, so good as Red in Into The Woods at Cabrillo Stage this summer) ably dispatches the fast-paced lyrics to “Another Hundred People.” Kathy (a poignant Lori Schulman) might be the one that got away. Together, they make a very funny, ’40s-style pop trio in “You Could Drive A Person Crazy.”

As bride-to-be Amy, getting spectacularly cold feet on the way to wedding her longtime sweetie Paul (Robert Gerbode), Melissa Harrison steals the show, tearing into Sondheim’s complicated comic tongue-twister, “(I Am Not) Getting Married Today,” with hilarious brio. The other characters onstage flash their phones like paparazzi amid Amy’s frantic snit.

Marchessault provides a solid center as Robert, who may or may not be learning from his friends’ mistakes. Rivera’s Joanne, who represents the “mature” viewpoint with third husband Larry (Michael Stark) in tow, delivers a thunderous rendition of the martini-soaked power ballad, “The Ladies Who Lunch.”

And does life imitate art? Look around at Intermission to see how many people in the audience are on their phones.

The Actors’ Theatre production of ‘Company’ plays through Oct. 13 at Center Stage. sccat.org.

Next ArticleSanta Cruz Film Fest 2019: Tech Before Its Time in ‘General Magic’