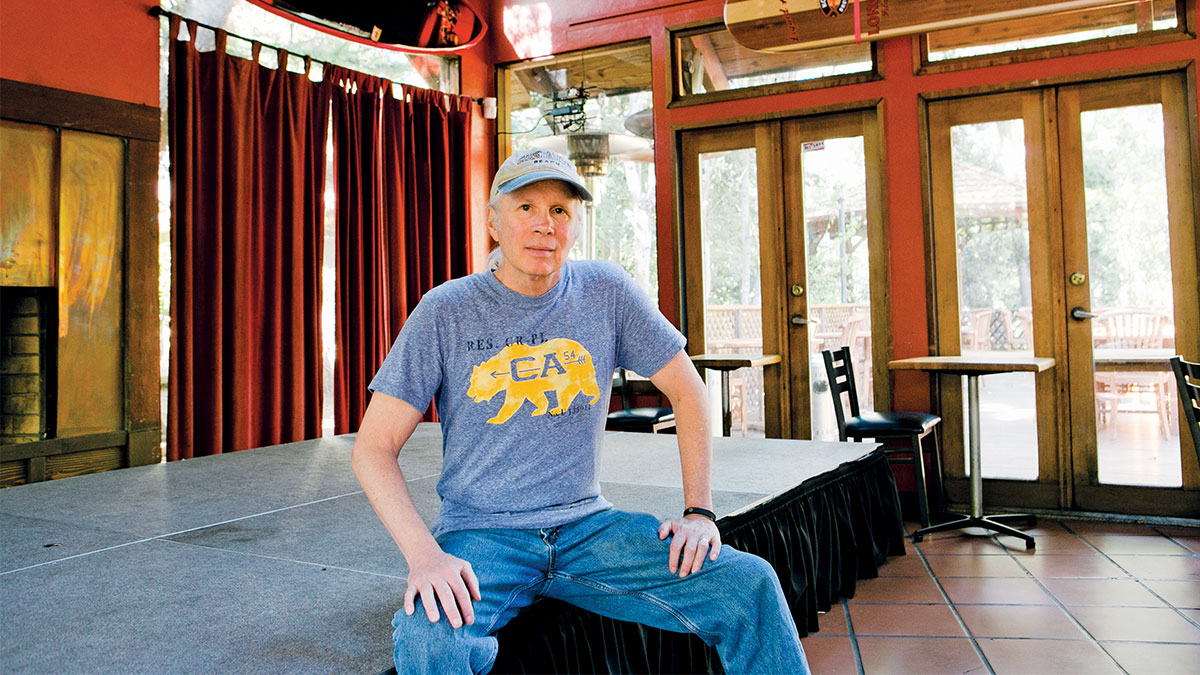 Tom Miller has booked bands in Santa Cruz County since the late ’70s, first at O.T. Price’s Music Hall in Soquel for a decade, and later for Henfling’s, Highway 9’s roadside tavern in Ben Lomond. When he started working at Don Quixote’s International Music Hall, he was bringing acts from every corner of the world—Scotland, Hawaii, Spain, the Sahara Desert, the Appalachian Mountains.

“We tried to bring the world to our community,” Miller says.

But Don Quixote’s, now under the ownership of Bradd Barkin, is in the process of switching its name to Flynn’s Cabaret and Steakhouse, and its booker of 13 years has moved on.

“It was time for me to leave, so I left,” Miller says.

As Barkin takes over as booker at the Felton venue, other local music venues are re-examining how they operate, as well—Santa Cruz’s Rio Theatre, for instance, is booking fewer shows these days, amid increased costs and steeper competition.

Miller, meanwhile, has found himself a new gig booking shows at Michael’s On Main in Soquel, where he hopes to bring a lot of the same acts he’s developed relationships with over the years, continuing a tradition of eclectic sounds that include Americana, world music and indie rock. His first show will be jazz fusion legend Brand X at 7:30 p.m. on Tuesday, Nov. 14.

“He’s done some really excellent work in Santa Cruz, bringing all this diversity in the world of music to Santa Cruz, and exposing Santa Cruz as a community, and raising the bar,” says Michael’s on Main owner Michael Harrison, who purchased the longtime restaurant with his wife Colleen Harrison last December.

Michael’s on Main has already had live music in some capacity for roughly a decade, often bringing in local bands to jam around dinnertime. Since the Harrisons took over, they say they’ve made live music a priority, going after more established acts, and in April, Harrison started Grateful Sundays, an evening devoted to the music of the Grateful Dead, which has been a hit, he says.

With Miller on board, Harrison says that that Michael’s on Main will become a major musical hub for Santa Cruz County. There will be two stages: a newer, seated listening room in the front that allows for 80 people, and another stage at the bar, where shows have always been, that can hold about 150. Miller and Harrison are shooting to have live music most nights of the week, with seated room shows primarily on the weekdays and bar room shows on the weekends. “It could be any kind of music. It doesn’t have to be just singer-songwriters. It can be throat singers from Tuva playing traditional Tuvan instruments,” Miller says.

Harrison plans to remodel the venue, hoping to increase the capacity for shows in the bar area by the spring.

In Felton, Barkin also says he’ll renovate to increase capacity, something that he suggests can be done by taking out a wall in the middle of the hall. He’ll change the name from Don Quixote’s to Flynn’s after the remodel, he says.

Barkin says he plans to rely on a lot of outside production companies to bring shows to him. Not committed to any genre in particular, he wants to bring in bigger acts, and believes his venue can attract more big-ticket shows in the $50 range. “I can’t continue to have $10 dollar shows in here for people that may not draw,” Barkin says.

While Harrison takes Michael’s on Main in more of an entertainment-oriented direction, Barkin has a different recipe for Flynn’s. “The business plan is this is a restaurant with a music venue, not a music venue with a restaurant,” says Barkin, who thinks Flynn’s will soon be “a nice, high-quality five-star restaurant.”

It isn’t only smaller local venues that are shifting their approaches. Rio Theatre owner Laurence Bedford says he’s slowly moved away from booking shows himself over the past three years. Lately, he’s booking almost nothing on his own, counting on production companies like Snazzy Productions and Folkyeah to plan shows and sell tickets, while he operates the 685-seat venue more like a rental house. The music business, he explains, can be unpredictable. Changes in the setup of guarantees—the minimum sum a band expects to get paid—he says, have made margins slimmer than ever for promoters.

“There is a thing with booking your own shows all the time: You never really know how well it’s going to do. You’re not always sure it’ll sell out. The guarantees have gotten higher,” Bedford says. “Doing really well one time and losing twice doesn’t really work well when you have bills every month. I found myself bidding against people I do other shows with. We decided that it wasn’t worth going there, so we just decided to support them.”

At the same time, John Sandidge, who runs Snazzy Productions, says that in the past five years, there’s been an increase in non-local production companies coming to Santa Cruz and booking shows. Many of them book packages of shows, sometimes all over the state, making it more difficult for mom-and-pop production companies to compete.

“We bring in more big acts than any town our size,” Sandidge says. “So the big money smells success down here.”

Bigger companies, Sandidge says, can offer bigger guarantees. But even if ownership and booking arrangements change, Sandidge says music fans often don’t notice the difference, as many of the same acts keep coming through town.

As the industry evolves, the Rio has been branching further outside the musical realm. Bedford has been hosting more films and talks like lectures sponsored by the Santa Cruz Museum of Natural History.

This month, the 68-year-old venue has seven events on the calendar—three films, two concerts, the Planet Cruz Comedy show and a fundraiser for Native Animal Rescue. “We’ve become a place that facilitates other types of things besides music,” Bedford says, “in order to stay alive.”

Next ArticleJohn Carpenter Embraces His Legacy in Santa Cruz