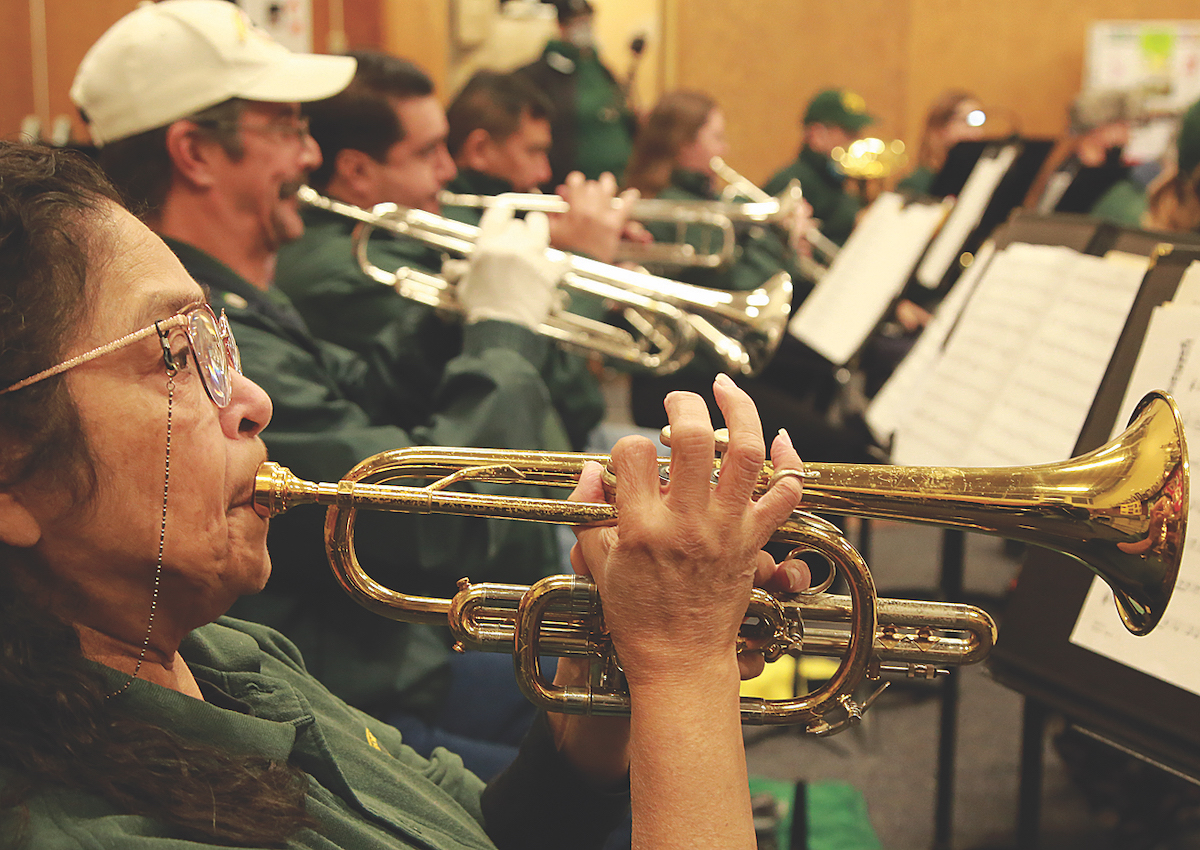 The Watsonville Community Band kicked off its yearlong 75th Anniversary celebration Wednesday during a break in its regular rehearsal in the band room at Watsonville High School.

The date coincided with the very first rehearsal of what was then called Watsonville Sciots Band in 1947.

“We’re the only community marching band in the whole country, and we’re still going at it,” said director Eugene Smith, who has been with the band for 56 years. “It’s a great group of musicians.”

On Tuesday night, Watsonville Mayor Ari Parker presented a proclamation to the band as well.

Louise Viales, who plays bass clarinet, said she has been in the band for 62 years.

“It just fills your heart,” she said. “Without music, I don’t know what I’d do.”

Since the 50-member band has been a class at Watsonville/Aptos/Santa Cruz Adult Education, that school’s director, Nancy Bilicich, was also present.

“Gene and I went to school together since fourth grade at Mintie White School,” Bilicich said.

She said she transitioned from playing the piano to drums and then to alto saxophone with the goal to play in the band at Watsonville High School.

“Gene played a variety of instruments throughout the years and became the conductor of the community band,” she said. “What an accomplishment to provide the community with music.”

“I really like playing in this band,” he said. “It is definitely more challenging than other bands. It’s fun.”1 of 8

The band has traveled to numerous countries in Europe, as well as Montreal and Alberta, Canada, Mexico City, New Zealand, Australia, Fiji and Hawaii. In Alberta, they performed in the Calgary Stampede Parade and field competition, where they took first-place honors and claimed $10,000 in prize money in 1982.

In June 1985, their first European tour included performances in West Germany, Liechtenstein, Switzerland, Austria and Hungary. They performed for U.S. military personnel in Mainz, Germany, and with a community band in Switzerland. In Hungary, they played a specially-arranged concert on Castle Hill, overlooking the Danube River in Budapest.

They were the first amateur group to perform behind the Iron Curtain, organizers say.

In 1987 they performed a 45-minute concert for Pope John Paul II at Laguna Seca. And in 1996 in Washington, D.C., after marching in the National Independence Day Parade, they played a two-hour concert on the White House lawn to an estimated crowd of 8,000 with a 20-minute visit from President Bill Clinton and Chief of Staff Leon Panetta.

In 2017, on their second trip to Washington D. C., they performed concerts at the WWII Memorial, Air Force Memorial, and the Veteran’s Retirement Home.

They are now preparing for their Spring Concert Series in March.