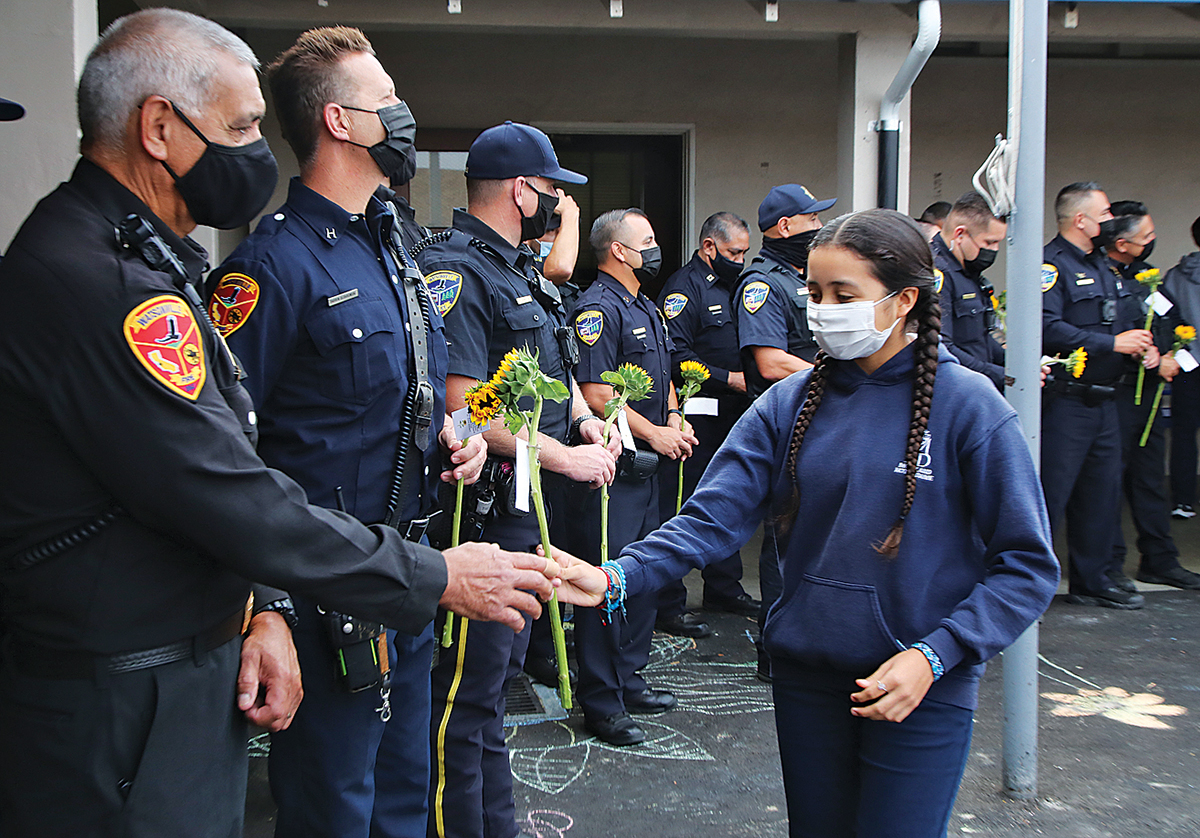 WATSONVILLE—It has been two decades since terrorists crashed two hijacked passenger planes into the Twin Towers in Manhattan, one into the Pentagon in Arlington, Virginia and a fourth into a field in Pennsylvania.

Since that day, people across the U.S. have found ways to commemorate the event and honor those that died.

Students and staff welcomed firefighters and police to the brief outdoor event to mark the 20th anniversary of the attacks. They gave words of thanks, praise, prayer and fresh sunflowers to honor the first responders that were killed in the attacks and to those that continue to carry the torch of emergency rescue and intervention.

“I was here 19 years ago at the first of these events,” said Watsonville Police Sgt. Mike Ridgway. “It meant a lot to me then and it means a lot to all of us now. Back then, I told my wife, ‘this is where I want our kids to go to school.’”

More than 25,000 people were injured and many suffered long-term health issues from the fallout of the collapsing buildings and fires. Officials reported more than $10 billion in infrastructure and property damage.

The attacks also had a global economic impact and brought about sweeping changes in security measures.

This included the War on Terror—headed up by President G.W. Bush’s administration—which led to the wars in Iraq and Afghanistan.

The creation of the U.S. Department of Homeland Security, increased security measures at airports and retooled police tactics around the U.S. were just a fraction of the fallout.

On May 2, 2011, under President Barack Obama, a Navy SEAL team killed Osama bin Laden—believed to be the mastermind of the attacks—in Pakistan.

Today, the National 9/11 Memorial and Museum, at the base of the World Trade Center complex that collapsed during the attacks, draws scores of visitors to New York City.

“It’s not only important to remember those that died in the attacks,” said Watsonville Fire Division Chief Tom Avila Wednesday, “but to also recognize those that continue to serve.”

Watsonville Interim Police Chief Thomas Sims said, “We sure appreciate events like this because it does make us feel good about what we do.”

Ando, who grew up in Corralitos, flew out to the West Coast in 2011 and unveiled the work, made of steel salvaged from the World Trade Center, in front of her hometown fire station.

“The Port Authority of New York allowed me to select and utilize a piece of steel salvaged from the Twin Towers to make a memorial sculpture for Cal Fire in Corralitos,” Ando said. “I selected a piece of heavily-rusted I-beam and polished it into a mirror finish so as to reflect light back to the viewer and to dematerialize part of the object; a mirrored object which reflects the surrounding landscape, and in some ways, becomes transparent. I wanted to create something that redirected light in the hopes of paying respect to those who were lost. The events of 9/11 have made me focus on the bridges between people; the things we all share instead of the things that separate us.”

Ando also created an 8-meter tall memorial sculpture, “Since 9/11,” also made from World Trade Center steel that is installed permanently at The Queen Elizabeth Olympic Park in London.

Next ArticleBiden Mandates Vaccines for Workers, Saying, ‘Our Patience Is Wearing Thin’