.Wineries Use Owls for Rodent Problems 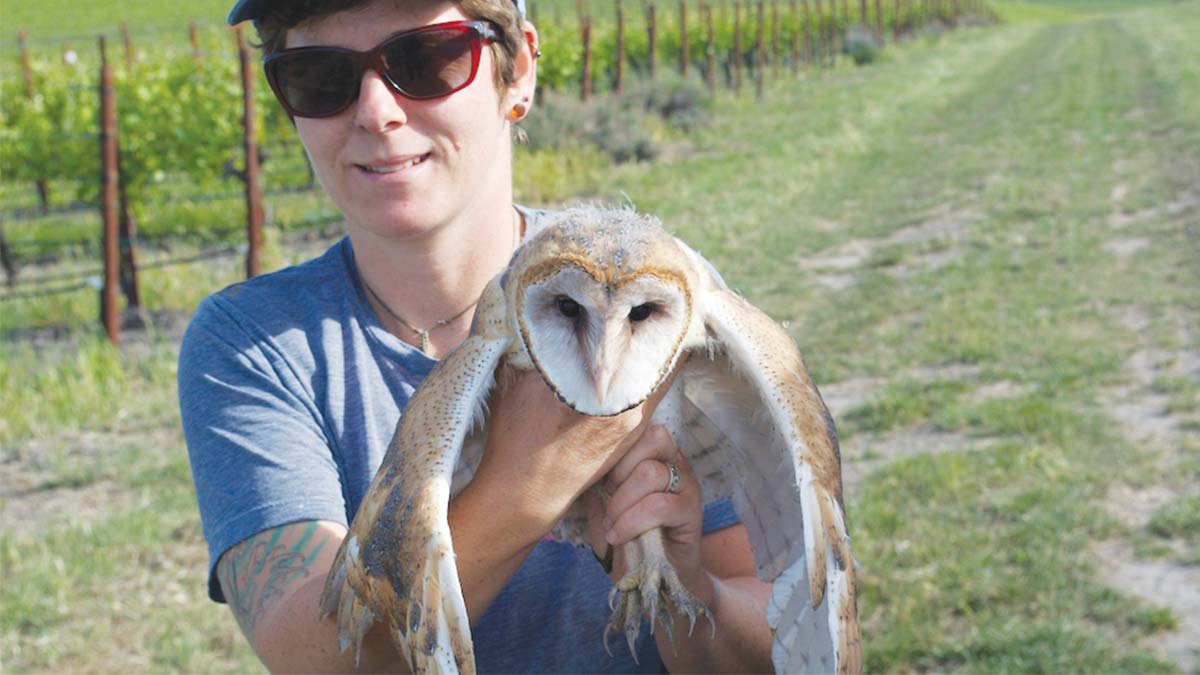 Julie Johnson delights in pointing out bluebirds whenever one alights in her certified organic vineyard. To encourage the colorful avians to stick around, she’s put up more than 20 nest boxes, and she instructs her vineyard workers to recognize and spare the nests of other songbirds when they are working in the vines.
“People get excited about seeing these birds do good things,” says Johnson, who owns Tres Sabores Winery in Napa Valley and hopes the bluebirds will snatch up problematic insects.
The good these birds are doing in this and the scores of other organic and sustainable winery operations that have installed nest boxes, however, has until recently remained somewhat anecdotal. Johnson has also placed several nest boxes for owls at Tres Sabores. The nearly ubiquitous owl box mounted high on a pole almost functions like a totem these days; on many a vineyard tour the guide will point to these boxes as evidence of the winery’s environmentally friendly bona fides—be they certified organic, sustainable or merely well-intentioned.
“They’re like superstars of the vineyard,” Johnson says of the owls. “We know that barn owls are among our nighttime predators that are really crucial for vineyards, capable of eating an incredible amount of rodent pests.”
But vineyard operators like Johnson can’t say for sure whether a vineyard is even a particularly good place to site the nest, from the owl’s point of view, or if the whole fad amounts to a new kind of greenwashing.
To answer questions about the efficacy of owl boxes, graduate student researchers from Humboldt State University have begun a first-of-its-kind study, painstakingly mapping the interaction between owls and vineyard habitat in the Napa Valley.
“Finally, we’re starting to get some really great research,” says Johnson, who hopes that the findings will help her to develop a program for “bird-friendly” farming or wine, similar to Fish Friendly Farming, based in Napa, and the Smithsonian Migratory Bird Center’s bird-friendly coffee program.
In the forested hills somewhere between Loma Prieta and Los Gatos, Jerold O’Brien sees wild owls flying around his Silver Mountain Vineyards.
“I see a number of them around. It seems like there are more of them in summertime than in the wintertime. I would assume they’re there because they’re eating something,” says O’Brien, who also has an owl box on his property, although he isn’t sure how often it gets used.
The organic winery is home to swarms of gophers, too, which love to chomp on grapevine roots and can kill a young plant—anything younger than eight years—O’Brien explains.
“We have a lot [of gophers], because we go out trapping every six or eight weeks. We’ll trap for three or four days. In three or four days, we might catch 15 or 20 gophers,” says O’Brien, whose 9-year-old dog Spencer assists in finishing off the pesky rodents.

Under the shade of the oaks at Tres Sabores last summer, Carrie Wendt is on break explaining the owl study research she began in the winter of 2015. A graduate student pursuing a master’s degree in natural resources and wildlife at Humboldt State University, Wendt studies the ecological services that wildlife can provide in agriculture. Although owl boxes have been used in vineyards for several decades, there is little to no scientific literature about them. Many of the oft-cited statistics on owls come from studies done in England and elsewhere.
To start, Wendt cold-called hundreds of vineyard managers up and down Napa Valley for permission to monitor their owl boxes. With a list of nearly 300 boxes in hand, she visited them all three times at 10-day intervals—making for long drives around Northern California.
Nest boxes fail for a variety of reasons, says Wendt: opportunistic mammals may climb into them, or red-tailed hawks and great horned owls may hunt the parent owls while they fly to and from the box.
Widely used poison bait for rodent control is also a hazard, as owls may be poisoned when consuming stricken rodents. But sometimes it’s a lack of available prey that makes owls abandon their nest.
From Tres Sabores, I follow the student’s bumper-stickered truck across the valley to Saint Helena Winery, off the Silverado Trail, on the search for a surviving chick. An owl box is located in the middle of a vineyard, and was last seen containing one healthy, surviving chick. As Wendt maneuvers a swaying camera pole into the box, a chick’s head appears out of the darkness.
Still a fuzzball of downy feathers, he’s almost grown-up, and looking downright surly as he sways and bobs in front of the camera. The dark side of his success is that, most likely, he consumed his siblings—not uncommon in the unsentimental world of the barn owl.
Following up on Wendt’s work, Humboldt State grad student Xeronimo Castaneda has been tagging adult owls with GPS transmitters. The work must be done within a demanding time frame: Castaneda has to find owls while they’re in the nest box with chicks 14 to 21 weeks old. Afterward, the adults roost elsewhere while continuing to feed the increasingly large chicks.
The boxes have hinged doors to facilitate cleaning. But it’s not for amateur ornithologists. The team had to apply to two agencies, the Bird Banding Laboratory, a division of the United States Geological Survey, and the Institutional Animal Care and Use Committee, to obtain permission to capture and tag owls. Researchers will then be able to track the owls and their hunting habits using GPS.
Castaneda suggests that while further study needs to be done, it may be true that even if owls aren’t actively hunting within the vineyard, their very presence affects the behavior of rodents, deterring them from eating vintners’ precious grapevines.
Castaneda mentions a small experiment conducted by an undergraduate that has yielded some interesting preliminary results. The student created a set of sandboxes, burying 100 sunflower seeds—rodent food—in each, and placed some in areas known to be populated with owls.
“It’s interesting that across the board,” says Castaneda, “those little bait stations where there were no owls—all the seeds were gone. But where there were owls, a portion of those were still left.”