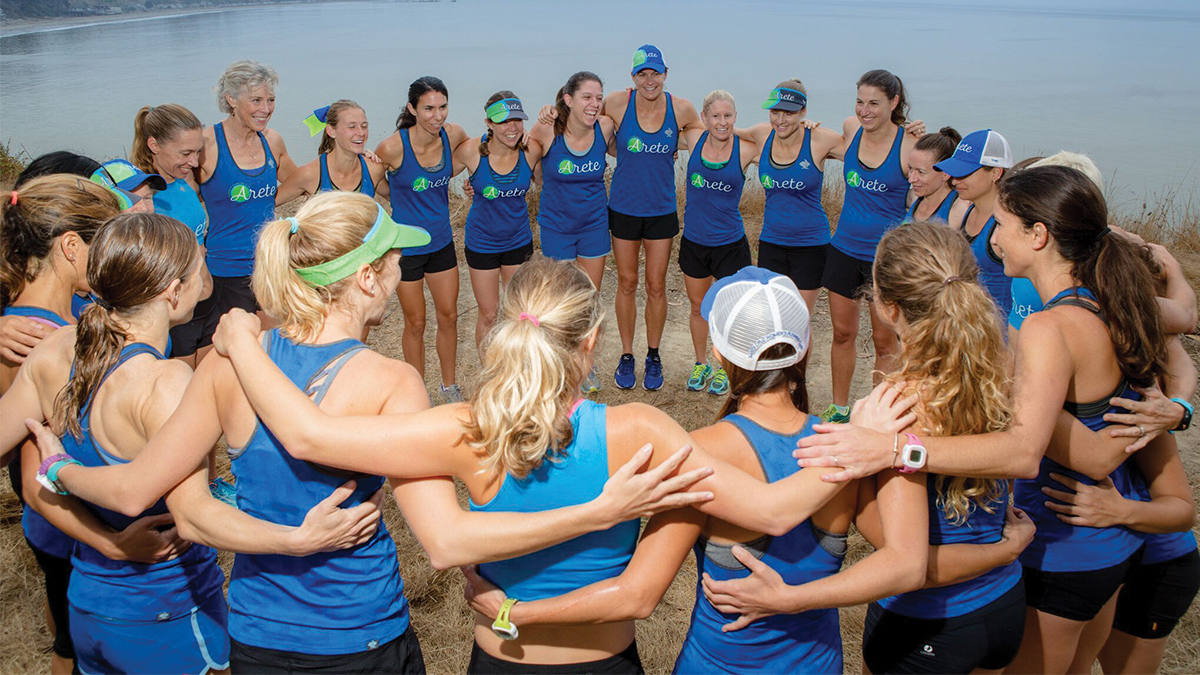 Since then, they’ve kept in touch—and kept running too, through pregnancies, moves to college and various careers. Wright ran on Division 1 teams at UCLA and Cornell University. McConville, who ran independently while at UC Santa Barbara, still competes in marathons. She’s also the creator of the popular she.is.beautiful race series, which takes place each year in both Santa Cruz and Santa Barbara.

Together, the two started shopping around for a running club a couple of years ago, but struggled to find the right fit.

“None of them really appealed to us. We were looking for something all-women,” McConville remembers. “We’ve run with men in the past. But there’s a different kind of energy, a camaraderie [with just women]. We both love men. We’re married to them. But men get egotistical when you’re beating them or running at the same pace as them.”

Gathering feedback from other runners, they launched their all-women team, which they called Arete, in 2016 with 20 members. The team has already grown to 80 members in Santa Cruz, with other chapters springing up around the Bay Area and beyond.

McConville can’t help feeling in awe of the club’s quick expansion. Less than two years in, she and Wright are already thinking about taking the club national.

Some of the group’s secrets lie in its name—pronounced ahr-i-tey, a Greek word for virtue—that reflects the group’s philosophy. Michelle Kern, 53, who has been running with the group since its first year, sums up the meaning of the word as “Excellence in fulfillment, living up to one’s full potential.” The group’s runners believe that competitors must develop mind, body, and soul in order to achieve arete.

The idea of an all-women’s team for experienced and intermediate runners is a new one. Wright says the current national atmosphere—with sexual harassment grabbing headlines—may have fueled interest in building and seeking community. Women on the team who must run in the dark of early mornings to fit it into their schedules always run in a group of five or six and feel safer in the streets together.

Wright and McConville, both 32, each bring their own unique perspectives to the club. Wright, a certified running coach, is an expert in training, conditioning, and running techniques, whereas McConville is more plugged into the running community and trends.

More than 60 members competed in the recent California International Marathon held in Sacramento, with all top 10 Arete members finishing in under three hours and 20 minutes, a 7:37-per-mile pace. Included in that group was 62-year-old Karen Kunz from the Sacramento chapter, who set an age-group course record of 3:15:06. Becky Lavelle, 43, a former reserve on the U.S. Olympic triathlon team, ran a time of 2:56:55. That puts her within 12 minutes of the qualifying standard for the Olympic Trials.

Certain club members who’ve reluctantly moved away have since started Arete teams in other locations. Other supporters found the club online, mostly through Instagram, and there are now chapters in Santa Barbara, Oakland, Sacramento, and Chico.

Arete, which just surpassed 200 members, is having its Santa Cruz Season Launch Party this Saturday. Wright and McConville are up front about the club not being right for any rank beginner. “Must be able to run six miles continuously” is the requirement listed on the website, and there are race time levels, “Open,” “Intermediate” and “Advanced” for athletes to aspire to.

The joy of that aspiration is right there in the group’s name.

“It’s just the idea of making improvements in all aspects of your life,” McConville says, “while, still feeling grateful for where you are.”

Arete Women’s Running Club is holding its 2018 season launch party at 8 a.m. on Saturday, Feb. 3, at New Brighton Middle School. There will be a fun run, complimentary coffee, brunch, physical therapy, and an info session. For more information, visit runarete.com.