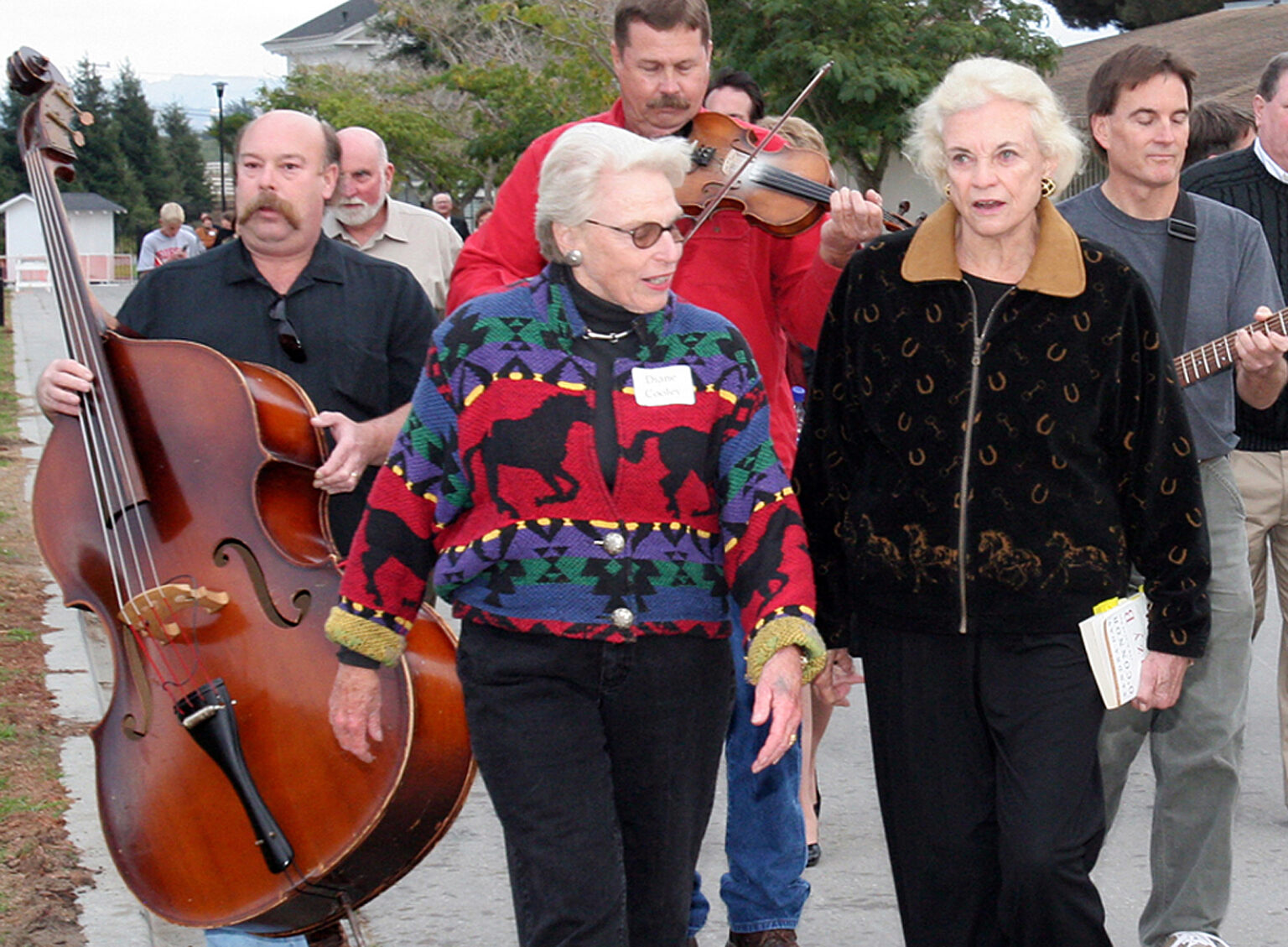 Diane Porter Cooley’s family history dates back to Santa Cruz County’s infancy. Her conservation efforts of both farmland and forest helped build the underpinnings of the county’s environmental ideology and reshape the way the nation viewed agricultural land protection. Cooley died Thursday in her Pajaro Valley home at the age of 93.

“She was an incredibly joyous, powerful, extraordinary force of nature,” says her daughter Anne Youngblood. “And nobody would argue that.”

Cooley harbored a deep and abiding love for the Pajaro Valley and its history, along with an appreciation that agricultural land should be preserved as working land. That belief inspired her to donate her family property—the Circle P Ranch—to the Land Trust of Santa Cruz County in 2001 as a conservation easement.

That move ended up setting a standard nationwide in the way communities save their agricultural land from development while keeping it as working land. It was made all the more impressive by the fact that Cooley first had to assuage the concerns of a skeptical community, says Land Trust Executive Director Sarah Newkirk.

“She had an undeniably transformational impact on the Land Trust,” Newkirk said. “That transformed our entire business model.”

Those efforts, Newkirk says, made Cooley an “ambassador” of sorts.

“She was able to assure them that working hand-in-hand with the conservation community was not risky, that it had benefits for both wildlife and people,” she said. “It transformed the land trust movement throughout the United States.”

Youngblood says that Cooley’s great-grandfather John T. Porter came to the area in 1850, just one year shy of being considered a pioneer. He nevertheless made his mark, becoming at 22 the youngest sheriff in Santa Cruz County history. He was also appointed as Monterey County Customs Officer by President Abraham Lincoln.

More importantly, he also became an owner of vast quantities of land, she says, setting the stage for the family’s legacy.

Cooley’s father, Tom, was a founder of Driscoll’s Berries.

She was also part of the Agricultural History Project and the Santa Cruz County Fairgrounds Foundation/Rogers House.

Local Historian Sandy Lydon, who sat with Cooley on the Citizens’ Advisory Committee of Nisene Marks State Park in the 1960s, says that “a light has gone out.”

“She was a pistol,” Lydon said. “I can’t imagine this place without her. She brought perspective. For historians, she was the glue that held everything together.”

Lydon says that Cooley worked efficiently with numerous political factions throughout the county.

“She was a link to the past,” he said. “She paid so much attention to the history of her family. And she remembered everything. She had a bear trap of a memory.”

Born on Oct. 15, 1928, in Oakland and raised on Los Lomas Ranch, Cooley graduated from Watsonville High School in 1946 and attended Stanford University, where she earned degrees in political science and economics.

That’s where she met her future husband, Don Cooley, with a marriage that lasted seven decades. The couple had two children, Anne and Steven.

She earned the UCSC Fiat Lux Award in 2013 along with her husband.

“Every conversation would turn into a great story, and she loved to share something new about the Pajaro Valley and beyond,” he said.

Longtime friend and Santa Cruz County Fair Boardmember Loretta Estrada describes Cooley as “one of the most intelligent people I’ve ever known.”

“If she ever told a story, you could tell she was so knowledgeable about so many things, especially about the Pajaro Valley,” Estrada said. “What she had to say was very important.”

“(She) had so much pride in her western heritage,” Estrada said. “I think she was still riding her horse at 90 years old.”

“She never hesitated to speak her mind, not worrying about political correctness,” Newell said. “She was funny and had a good sense of humor.”

Watsonville/Aptos/Santa Cruz Adult School Director Nancy Bilicich says that Cooley was “an extraordinary woman who was extremely strong.” Cooley’s input during a recent evaluation helped the school obtain its six-year accreditation from the Western Association of Schools and Colleges.

“She never hesitated to give her opinion and justify her thoughts,” she said. “She had a heart of gold.”

Above all, Youngblood says, it was Cooley’s relationship with her friends and family that brought her the most joy.

“She had one of the most vast networks of family and friends I have ever witnessed,” she said. “I don’t know how I was so lucky to have Diane Porter Cooley as a mother.”

Previous ArticleEven Before War, Thousands Were Fleeing Russia for the U.S.

Next ArticleWhat Characteristics Should Santa Cruz’s Next Police Chief Have?