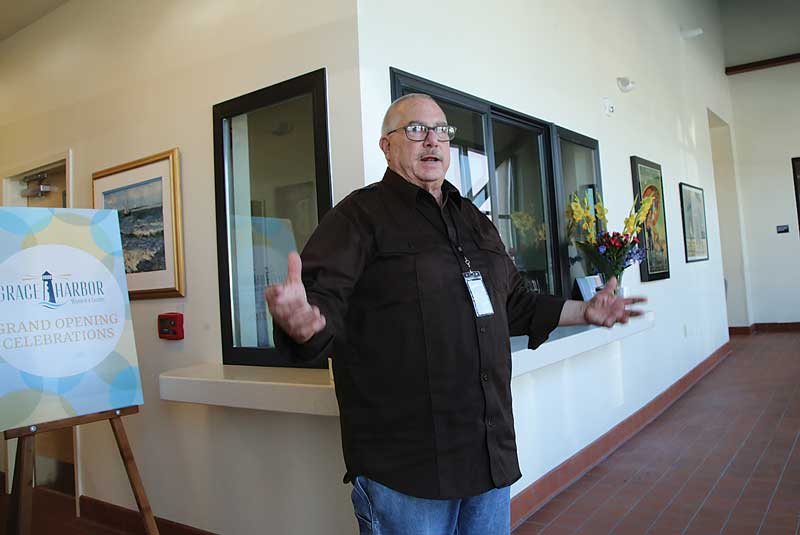 WATSONVILLE—A seven-year-long project has come to fruition for Teen Challenge Monterey Bay (TCMB) and the Pajaro Rescue Mission with the opening of the Grace Harbor Women’s Center in Watsonville.

The new center and shelter at 55 Brennan St. provide 50 beds for women with issues such as drug and alcohol addiction, who are a part of the faith-based Teen Challenge residential program. Another 42 beds are available on a short-term basis for homeless and at-risk women, including those with children.

The 20,000-square-foot center will also include the Rustic Table Restaurant, the Lighthouse Treasures Shoppe and a clinic run by the Pregnancy Resources Center of Santa Cruz County.

The center celebrated its Grand Opening on Sept. 9, and they will hold another ribbon-cutting ceremony for the restaurant and store on Sept. 23.

“This was a huge project,” said Mike Borden, executive director of TCMB. “When we secured this building, we had no idea the magnitude of what we were getting ourselves into. This building is more than half an acre. So much stuff needed to be done.”

The building itself is believed to have been constructed in the late 1920s or early ’30s. Originally a Ford car dealership, it then became Baker Brothers Furniture, which is now Baker Brothers Furniture & Appliance, located around the corner. In 2012 it was purchased and donated to TCMB. The Watsonville Planning Commission approved the Grace Harbor project in 2014.

The remodel of the building included reinforcing it with steel beams above and below ground, updating electrical, plumbing and HVAC, and updating its seismic retrofit.

Borden said it was built to last “at least 100 years.”

“Honestly, this would be the best place to go after a disaster,” he said. “With all its reinforcing … It’s basically a building inside another building.”

The national Teen Challenge program was founded in New York City in 1958 by Pastor David Wilkerson, who aimed to help young people overcome life-controlling issues such as gang violence and homelessness. TCMB began operating in the Pajaro Valley in 1987. They teamed up with the Pajaro Rescue Mission in 2007.

In addition to helping people recover from addiction and homelessness, Teen Challenge also aims to provide their students with work skills and experience. The restaurant and retail shop will be employed by women who are or have been part of the program.

This is one aspect of the program that Borden said is “vital” to their success.

“We can get them sober, give them Jesus Christ, but if we don’t give them a means to support themselves, all that can go away,” he said. “Here, they get clean and sober … get spiritual teaching, and we give them life skills. They can write their resume as they go through the program.”

Sara McGee, assistant program director at Grace Harbor, said that the free services will help women find their footing as they reenter the workforce.

“A lot of these women don’t have much, or any work skills or past experience,” McGee said. “Here, they will get these skills by learning on the job … and the money made goes right back into the program.”

The Rustic Table is the second such restaurant. The first was opened in Placer County, and another is planned to open in Lassen County. Chef Cyndahl Schobel, a former participant in TCMB who is now a staff intern, will serve up a menu featuring American cuisine.

“Cyndahl will learn from our executive chef … and then she’ll teach the students,” McGee said. “Our program is all about that sort of development.”

A large cafeteria and gathering space is situated at the back, where women and their children can eat, relax, study and socialize.

Borden said that when designing the facility, safety was their top priority. Lights, electronic locks and security cameras have been installed at the front of the building and hallways.

The center also boasts self-sustaining power, utilizing solar panels and opening a set of skylights that offers plenty of natural light to reduce electricity use.

Borden said that finally opening the center after such a long haul feels “unreal.”

“It is incredibly exciting and almost unbelievable that we have finally opened,” he said. “We’re living in a miracle.”