.The Artist Behind the Exploration Center’s Whale Installation 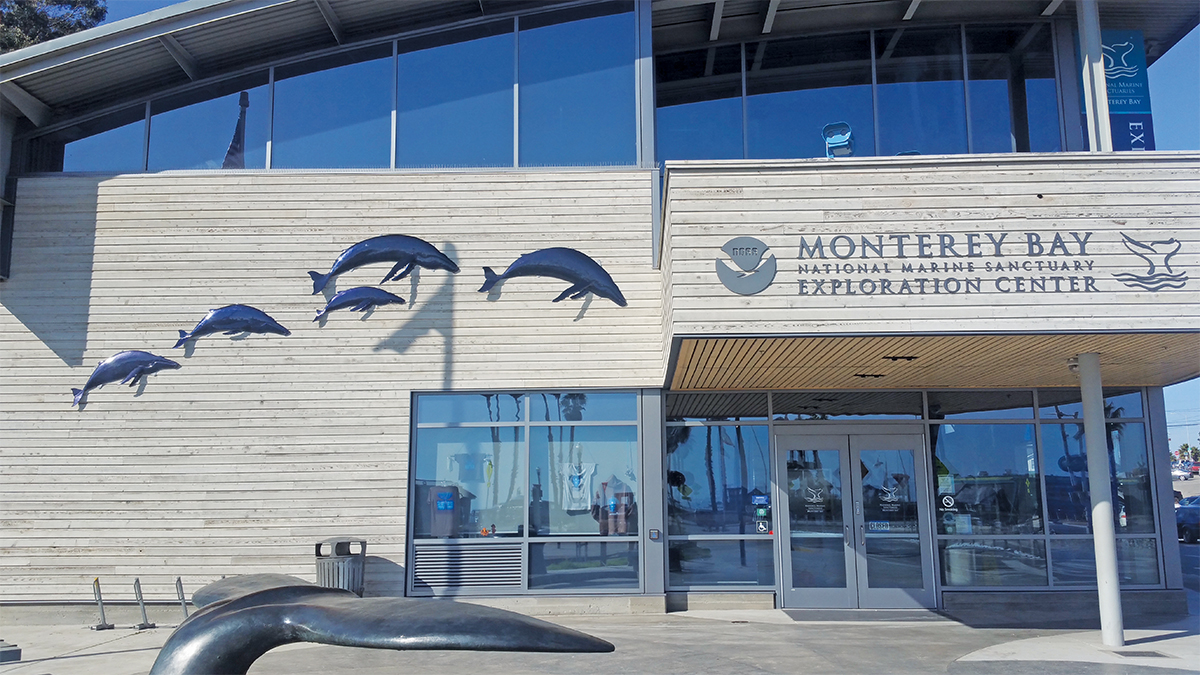 [dropcap]A[/dropcap] two-year project has finally come to life on the exterior of the Marine Sanctuary Exploration Center near Main Beach. Five metal sculptures of humpback whales now decoratively breach the wall as a result of a collaboration between the Exploration Center, the National Oceanic and Atmospheric Administration and local artist Robert Seals.

For Seals, working with metal has always been a passion.

“I started metal work when I was in my teens up in Chester, California,” says Seals. “In 1963, I started taking ceramics. There was a metal shop, but not metal sculpture. I took the metal shop class just to sneak in at night and do small sculptures and projects.

Seals attended Utah State and eventually Chico State in ’65. Because there was no welding in the art department, he brought his own tanks and metal. Even back then, Seals wasn’t going to be confined by the status quo or limited in his scope of influence. “It’s the medium I feel most comfortable in,” he says.

Seals plays in local band the Wave Tones, riffing on Hawaiian and surf music, and is also an inventor. He first created Board Bud and Cool Tool, an all-one-in tool for snowboards and mountain bikes, respectively. Then he hit it big with the portable stainless steel water carrier Klean Kanteen, and revolutionized the way water is transported for personal use.

“I used to be terrified of the ocean.” — Artist Robert Seals

“I got so tired of seeing plastic water bottles littered all over the grounds of music festivals,” says Seals. “So I went to the local hardware store in Chico and put together a safe, healthy, lightweight bottle free of BPAs and other toxic substances. Turns out other people wanted them, as well.”

The sheet steel Humpback Whales, which were specifically requested by the Sanctuary Center, are powdered in a blue coating that reflects like wave drops in the sunlight and entice hundreds of thousands of people from around the world to stop by and learn about our magnificent Monterey Bay. Always the innovator, Seals had trouble using traditional means to securely adhere his art to the wall.

“I had to invent a special mount for the installation. Even an earthquake won’t shake them loose,” says Seals.

Through his activism, metal working and vision, Seals has found yet another calling, as an educator, environmentalist and oceanic guru. But being one with the ocean wasn’t immediate.

“I used to be terrified of the ocean,” he admits, recalling when his band members tried to get him to go into the ocean in Coos Bay, Oregon. “I was afraid of sharks. The lifeguard overheard my band members teasing me and said, ‘There’s never been a shark sighting in Coos Bay.’ The next day we’re in Portland for an audition and a headline of a newspaper grabs my eye. It said, ‘Fifty sharks mysteriously beach themselves in Coos Bay.’ It happened like an hour after we left.”

How times have changed. Today, oceanic art is just a part of his activist arsenal. Seals works non-stop at education and hands-on encounters, all centered on the Bay. “We have been trained to use our 55-foot catamarans to assist in the NOAA Whale Rescue Program,” says Seals, while mounting his latest installation.

Another project he’s passionate about is an educational mobile art museum space. You may have seen his van around Santa Cruz—metal fish on the outside and full of whales, dolphins, mermaids, turtles, seahorses, and starfish inside.

All the profits from his art go back to Seals’ nonprofit foundation Mother Nature’s Temple. He’s adamant that in order to save the Bay, and the planet, children need to be educated. After attending a global conference on nature and its effects on the youth, Seals says he learned about the “Nature Deficit Disorder” that many children suffer from.

“It’s like a digital age curse where our children are losing touch with, well, reality,” he says.

In order to set the balance straight, Seals went right to the source. “We have created our own summer camp experiences for young people. We do ocean adventures, camp outs, hiking and we will donate any of our resources to other programs with similar missions.”

The roots of Seals’ activism are deep. “The Vietnam War was the birth of environmentalism and today, in the 21st Century, the environment is still struggling,” he says. “I’ve committed myself to doing everything in my power to work with anyone with a similar ethos and message.”

When asked about what he sees next for his organization, Seals quotes Captain Quint in Jaws: “We’re going to need a bigger boat.”

Robert Seals can be contacted at mothernaturestemple.org.