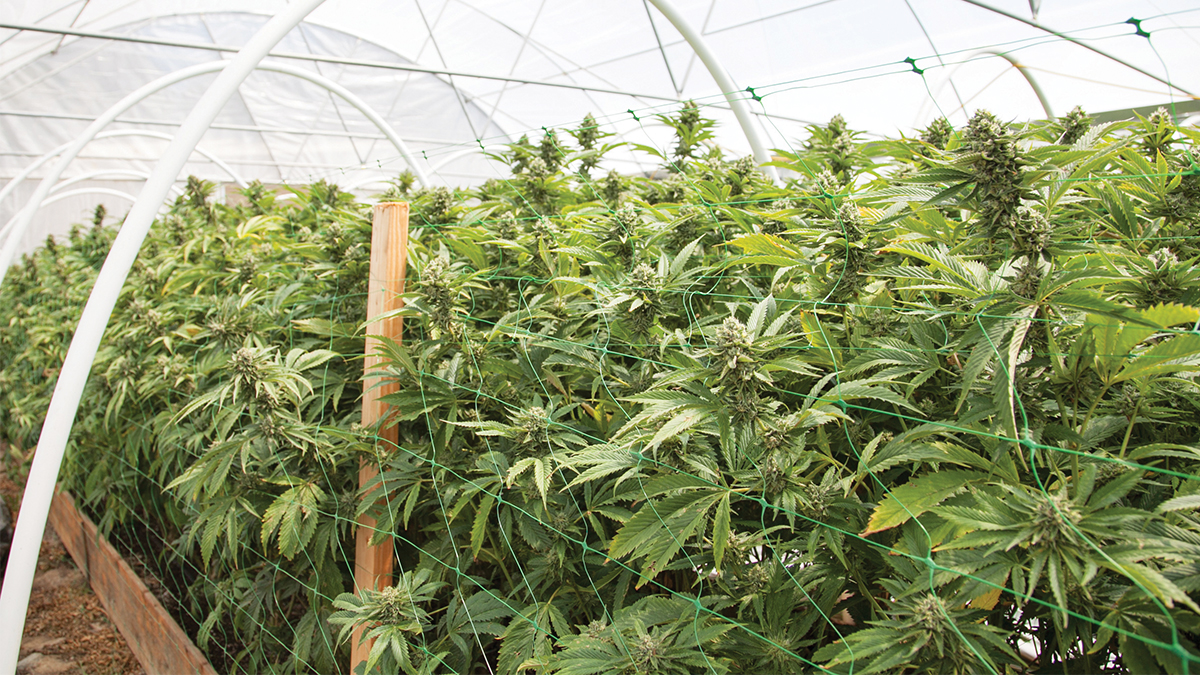 [dropcap]I[/dropcap]t’s question-and-answer time, as a microphone wends through the crowd at a meeting about the latest updates to the county’s newly proposed cannabis rules last Wednesday.

Some of the queries aren’t really questions at all, but instead pointed comments that highlight a growing frustration among cultivators and manufacturers.

“That’s back-asswards,” he says. “Obviously, if you have commercial agricultural area, you probably have a lot of land. When you’re in residential agriculture, like people in the hills, which has been the boutique heart of this industry for 30 years in this town, that’s where there should be some flexibility.”

The man, who asked to remain anonymous, later tells GT he’s been growing in the Santa Cruz Mountains for decades, mostly for his own use, or occasionally to share with friends. This hobbyist cultivator, who works in produce, has aspirations of taking his grow mainstream, but it’s getting hard for him to imagine when or how.

“What they’re doing is eliminating a lot of microclimates,” he says of the county’s approach. “They’re getting rid of a lot of those ‘boutique,’ if you will, growers. With wines, there are certain regions that are famous for certain grapes, Bordeaux grapes for Bordeaux wine, Champagne grapes for Champagne. Napa has great wines. With cannabis, if you’re growing on a flat land in Salinas or Watsonville or the Central Valley, you can still have a great crop, but it’s not going to have the handcrafted quality of the Santa Cruz Mountains.”

Cannabis licensers and planners in Santa Cruz County have been trying to find the middle ground on this divisive issue, one that has optimistic entrepreneurs on one side and concerned neighbors on the other. But if previous batches of local cannabis rules displeased many of the cultivators, this latest crop seems to have upset just about everyone.

In a meeting where the public comment period lasted for close to two hours, the Board of Supervisors voted unanimously on Monday, Feb. 5, to accept the new draft ordinances and send them to the Santa Cruz County Planning Commission, along with a few comments to provide direction.

Neighbors say that some of the reduced setbacks for grows are now too generous, and that the county will allow cultivation on too wide a range of local zones, like ones intended for timber harvesting.

Advocates, though, say the zoning and licensing requirements, although now more flexible, are still unnecessarily strict compared with parameters laid out by the state. Cannabis attorney Ben Rice estimates that fewer than 20 percent of entrepreneurs who paid their $500 registration fee for a spot in line would be able to operate under the proposed ordinances. Those who can’t till their own residential acreage would, however, now be able to “co-locate” under the newly refashioned rules, and share large agriculture properties with other growers. But Rice and others say that even still, the rules for co-location are more than cumbersome enough to scare off potential partners—particularly a provision that licensees must take responsibility for whatever their neighbors are doing on the same parcel.

This past Monday, the supervisors made a long list of recommendations to staff, including possible changes to public noticing, pest management, tree clearing, and certain definitions in the county code.

Walt Haimes, who lives far back in the Santa Cruz Mountains, worries that the county has been rushing the process, without proper attention to detail. As the new year dawned, the county appeared to be nearing the end of its environmental impact report on cannabis and poring over the comments. That process has essentially since been shelved. Worried about the swarm of growers cropping up in his neck of the woods, Haimes says no local has had enough time to digest the ordinance changes and provide meaningful input.

“We spent a lot of time on these EIR [environmental impact report] comments,” he says. “To stand up in front of the board for two minutes and try to answer these major questions—it seems to me that this is a little bit rushed.”

Haimes, who says he constantly hears buzzing chainsaws from his increasingly noisy neighbors, was hoping the county would finish its EIR process.

But a new state law approved last summer allows local governments to create a case-by-case review process for weed, circumventing the typical environmental review process. District 3 County Supervisor Ryan Coonerty said Monday that the new environmental approach, which the board also approved Monday, will protect the county from any possible lawsuits, a threat that was more than hypothetical. A scathing letter from local environmental attorney William Parkin had called the EIR “among the most deficient we have seen in our years of practice.”

Haimes lives high up in the hills of Corralitos. He says that whenever a property at the very back of a winding mountain road goes up for sale, the same thing always happens—it gets bought up by someone from out of state who comes in and starts cutting down trees and hastily grading hillsides, without considering impacts on the watershed.

“My driveway goes through that property,” he says of one neighbor, “and it’s been nothing but hassle. We’re not getting any help repaving the road, either.”

Haimes adds that he’s skeptical that the county is investing in the right tools to crack down on black market cannabis. He fears that the county will struggle to eliminate bad actors by simply relying on code enforcement and a few hefty fines.

District 1 County Supervisor John Leopold said Monday that the board did learn some important information from the county’s environmental document, even though some people thought the EIR was “junk,” he says.

“There are people who found that it was really good,” he went on. “And we knew going into that process that we faced a big hurdle in coming up with a good environmental impact review, because there was so much we didn’t know about that which we were reviewing. We tried hard to try to identify who was growing, to try to figure out what kind of cultivation sites there were. But by its very nature, taking something that hasn’t been in the light and then trying to do an analysis—you’re going to have a lot of holes.”

Next ArticleSanta Cruz Sex Podcasters are on a Mission