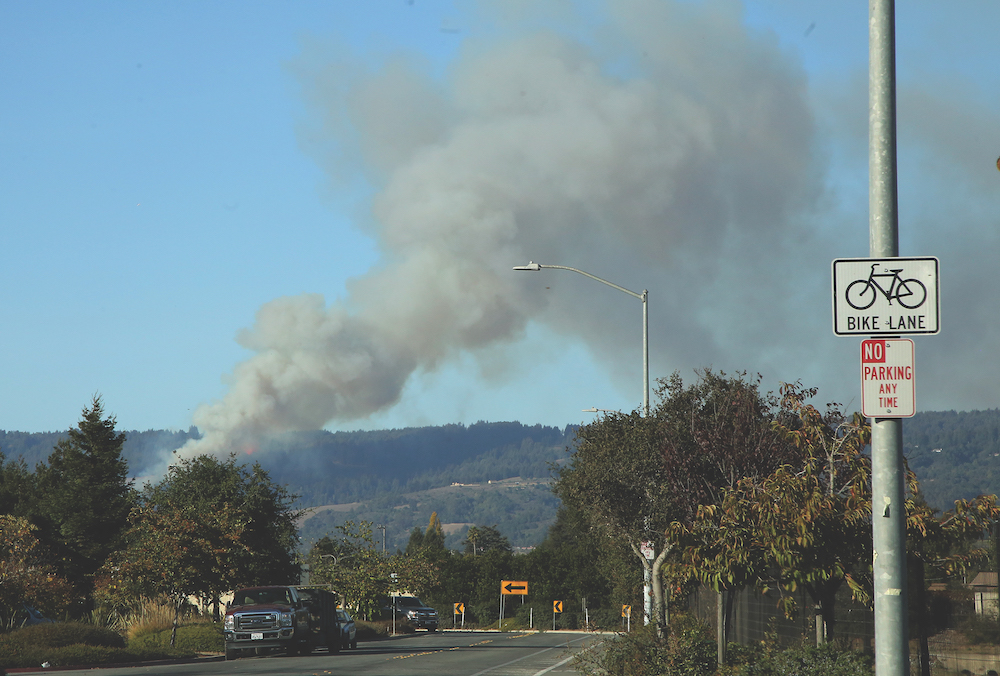 As firefighters continue to “mop up” a blaze in the Watsonville foothills sparked by a prescribed burn that went awry, some Santa Cruz County officials and residents are calling for the Cal Fire San Mateo-Santa Cruz Unit (CZU) to answer lingering questions surrounding the Estrada Fire.

Chief among them: why go through with the burn at the sprawling Estrada Ranch despite Friday’s 87-degree heat and dry conditions?

Cal Fire CZU Division Chief Angela Bernheisel said the fire was one of a series of prescribed burns planned at Estrada Ranch that Cal Fire had brokered after at least a couple of years of working with the property owner, retired Cal Fire Battalion Chief Greg Estrada. They planned to burn some 20 acres Friday, but reduced the size of the burn as the day went on.

“At the end of the day, that’s when they got a little too much heat in the burn and it started some fires across the line,” Bernheisel said Saturday. “And with the resources that they had there, they just weren’t able to pick it up … luckily resources were ready and available … we got everything that we asked for.”

The fire as of Tuesday morning was 80% contained, and had charred at least 148 acres. No homes were destroyed, and the 174 people that were asked to evacuate from their homes east of Hazel Dell Road on Friday evening were allowed to return back to their property on Saturday.

At its peak, there were some 270 first responders battling the Estrada Fire.

Bernheisel said that Cal Fire CZU should have the blaze completely contained by early Thursday if all goes well.

“A lot of it is going to depend on what they find in the next couple days,” she said.

A prescribed burn, also called controlled burn, is the intentional use of fire to clear away dried vegetation that acts as fuel for wildfires. Bernheisel said that this prescribed burn was part of the agency’s Vegetation Treatment Program in which Cal Fire works with private landowners to reduce fuels in hopes of preventing large-scale fires.

Bernheisel said Saturday that embers from burning brush spread outside the fireline “where the wind was just enough to carry it a little too much beyond what we can control.”

Cal Fire CZU Unit Chief Ian Larkin on Tuesday stood by the decision to conduct the burn on Friday, saying that the conditions were right and the resources required to perform the preventative measure needed in the era of ‘mega fires’ were available.

“There is work that needs to be done to reduce fuels,” he said.

Santa Cruz County Supervisor Zach Friend, whose 2nd District covers the area in which the fire burned, said that although prescribed burns are an important tool for Cal Fire to use to prevent massive wildland fires such as last year’s CZU Lightning Complex, the local unit should answer questions brought forth by his constituents impacted by the Estrada Fire.

“Where I think the analysis needs to be is time, place, manner. Was this the best time and place and manner by which to do this? Obviously, it wasn’t because it jumped the line,” Friend said. “It doesn’t mean that location didn’t require a fuel reduction … But when you have to evacuate an entire community, when people are terrified that they’re going to lose their homes, when they have no place to go, that’s worthy and reasonable to ask for an after-action [report] and communication with the community on why the decision was made and how it was made.”

When asked whether Cal Fire CZU had planned to host a community meeting regarding the Estrada Fire, Larkin said that the agency would have an internal review of the incident to determine what could be done differently before, during and after prescribed burns.

The results of the review will then be made public through a press release.

Friend also said that many of his constituents did not know that a prescribed burn was happening on Friday, and that he was only made aware of the action after it had jumped containment. He learned after the fact that Cal Fire CZU had on Thursday posted a press release to social media about the prescribed burn.

“I think there are three frameworks that are important: (1) can we have a more robust notification process … (2) what’s the decision-making process as to when these prescribed burns are going to occur … and (3) what after-action or analysis is done after these events when they turn like this, so the community knows what happened and what can be done differently next time and whether this could shift decisions,” Friend said. “The difference between this being scary and catastrophic is very thin, and people are in [a state of] very heightened awareness in our area over fires.”

Watsonville Mayor Jimmy Dutra, who also did not receive any notification about the prescribed burn until it had gotten out of hand, said that although the fire did not force any evacuations of the 55,000 or so people in the county’s southernmost city, many residents were clamoring for information about its spread and whether or not they should be prepared to move. The sudden evacuation of Scotts Valley during last year’s CZU fires, Dutra said, was fresh in many residents’ minds.

“Even though the fires didn’t directly impact Watsonville, it was still close enough that people were really nervous about it spreading down,” he said. “The communication with local agencies needs to be better … Like anything, communication should be key.”

He also agreed with Friend that there needs to be some public explanation from Cal Fire CZU about why the agency decided to go through with the controlled burn during the hot and dry day. He also had questions about why the agency in its initial press release did not come clean about the cause of the fire, and instead said it was investigating what sparked the flames.

“Some of this stuff just doesn’t make sense and I think people deserve answers,” Dutra said.

Bernheisel said that the process leading up to a controlled burn is more than just “going out there and burning a plot.” Cal Fire, among other things, works with air quality regulators, monitors weather patterns and consults with fire scientists to determine the best conditions and approaches for the burn. Bernheisel highlighted a controlled burn planned for early next summer in the Soquel Demonstration State Forest in which it plans to work with the Amah Mutsun Land Trust and incorporate some of the Amah Mutsun Tribal Band’s traditional fire ceremony methods.

“There’s so much preparation that goes into these burns,” she said.

Still, because of the permitting process and escalating drought conditions around the state, Cal Fire CZU conducts only a handful of controlled burns a year.

In 2020, according to the Prescribed Fire Information Reporting System, there were six controlled burns. All of them were completed without incident. What happened Friday is “rare,” Bernheisel said.

This story was updated at 1:52pm on Oct. 19 with comments from Cal Fire CZU Unit Chief Ian Larkin.

Previous ArticleBiden’s Plans Raise Questions About What U.S. Can or Cannot Afford to Do