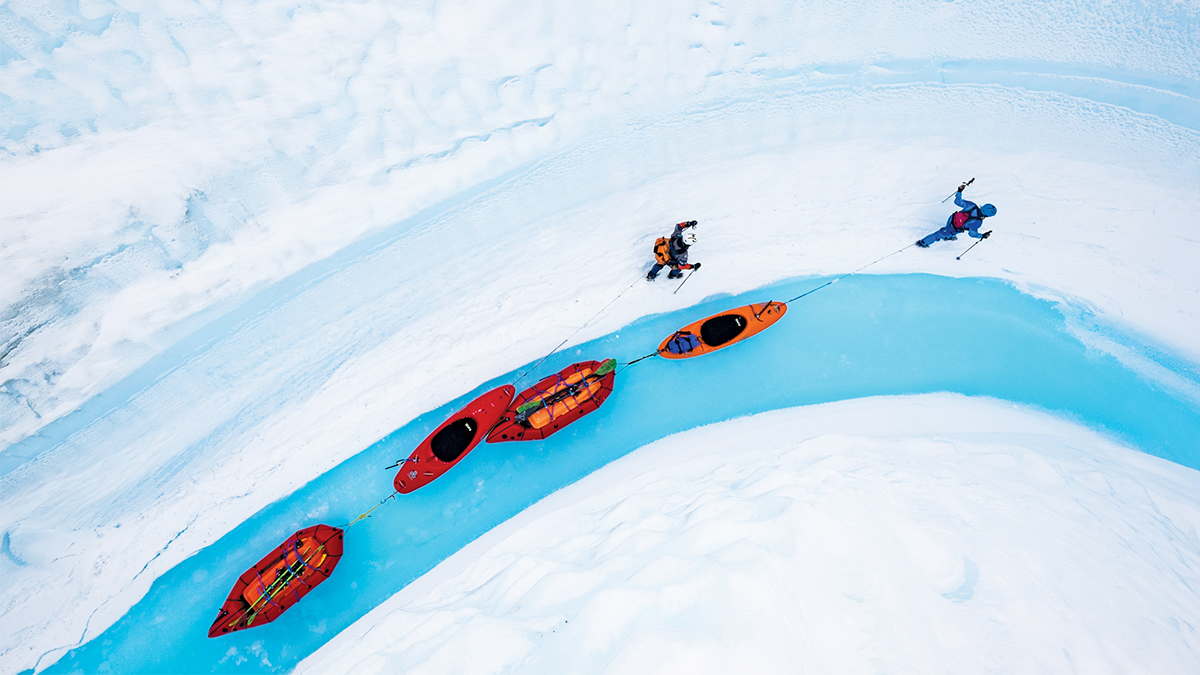 [dropcap]T[/dropcap]he 2018 Winter Olympics showcases the top athletes in the world. But what of the rugged individualist unable to be trained by committee, seeking the extremes of body and mind, teetering on the edge of death, straining just to catch a glimpse of freedom? Well, luckily there’s an international film festival that highlights these daring dream chasers.

Held every year in Banff, Alberta, the movies in the festival document high-octane sports that defy reason. A traveling collection of the best films tours the world and we’re fortunate to have the Banff Mountain Film Festival coming to Santa Cruz. It’s easy to guess what fuels an Olympiad training to be the best in the world: national pride, competing against the greatest and winning a medal. But what compels humans to risk life and limb in the middle of nowhere, as they do in so many Banff films?

Take the film Twin Galaxies: A Greenland Epic. Three millennials, whom National Geographic deemed “adventurers of the year,” take on an absolutely insane quest. Sarah McNair-Landry is considered a world-class polar guide, and professional kayakers Ben Stookesberry and Erik Boomer found a never-before-paddled river while searching through Google Maps. They set off on foot, dragging kayaks and a heavy load often blown forward by kites. Ultimately they trudge 1,000 kilometers through the frozen tundra of Greenland, below freezing temperatures, slushy rain made of ice and the specter of death hiding in the white out conditions. Not a picnic!

McNair-Landry suffered a compression fracture on her vertebrae and several broken ribs due to a miscalculation that took her ice kite high in the air and slammed her down mercilessly on the hard ground. She didn’t find out the extent of the damage until she got home, because there was no question or possibility of turning back.

One thing that becomes clear during the four-day festival is that the gene for extreme sports is a worldwide phenomenon, with films coming from countries around the world. What draws them together is a boundless enthusiasm for (hopefully) doing what’s never been done, no matter what the cost.

Searching for a Christmas Tree is another Banff triumph, not only for the unimaginable physicality of the film, but also because of the creative thinking and resolve that it showcases. Filmmaker Zhang Yunping, a.k.a Crack; university teacher He Chuan; and Liu Yang, who is one of China’s top rock climbers, set out to find an elusive marvel in China. The Christmas tree in question is a towering frozen waterfall, whose slick surface and uneven terrain make for a death-defying ascent. But this isn’t just a movie about ice climbing; it’s also about how an ordinary person can achieve even the wildest dream. Chuan was a university teacher who had a vision of climbing a frozen mountain he christened a Christmas Tree. It took months of searching for the icefall and assembling a team. It was a literal leap of faith and the fact that it was captured on film makes it all the more compelling. These aren’t just “extreme sports movies.” Banff’s collection is an affirmation in these dark times that people are constantly striving toward dreaming up new challenges that redefine what is possible.

During the four-day festival at the Rio Theatre, one can see dozens of films, many of them less than seven minutes long. The current tour explores their trademark world of mountain climbers, but also highlights new environments, ancient cultures and even tapers off the edge-of-your-seat momentum to slide in a charming gem of an entirely different sort as well. Hailing from Canada and clocking in at five minutes, it’s called Imagination: Tom Wallisch. ESPN’s extreme sports commentator Tom Wallisch is usually busy interviewing X Game winners, but in this fun, feel-good ski film, his ability to fly through the air is enchanting. Imagination is mind-blowing and clever, with Wallisch skiing over everything and everyone in a small town in Nelson, British Columbia, as seen through the eyes of a child. It doesn’t have any of the pulse-elevating drama of so many of the films in this year’s collection, but like them, it finds its own way to inspire.

The Banff Mountain Film Festival runs from Thursday, Feb. 22 through Sunday, Feb. 25 at the Rio Theatre, 1205 Soquel, Santa Cruz. Show time is 7 p.m. Tickets are $22 and at brownpapertickets.com. More information at recreation.ucsc.edu. Some shows are sold out.