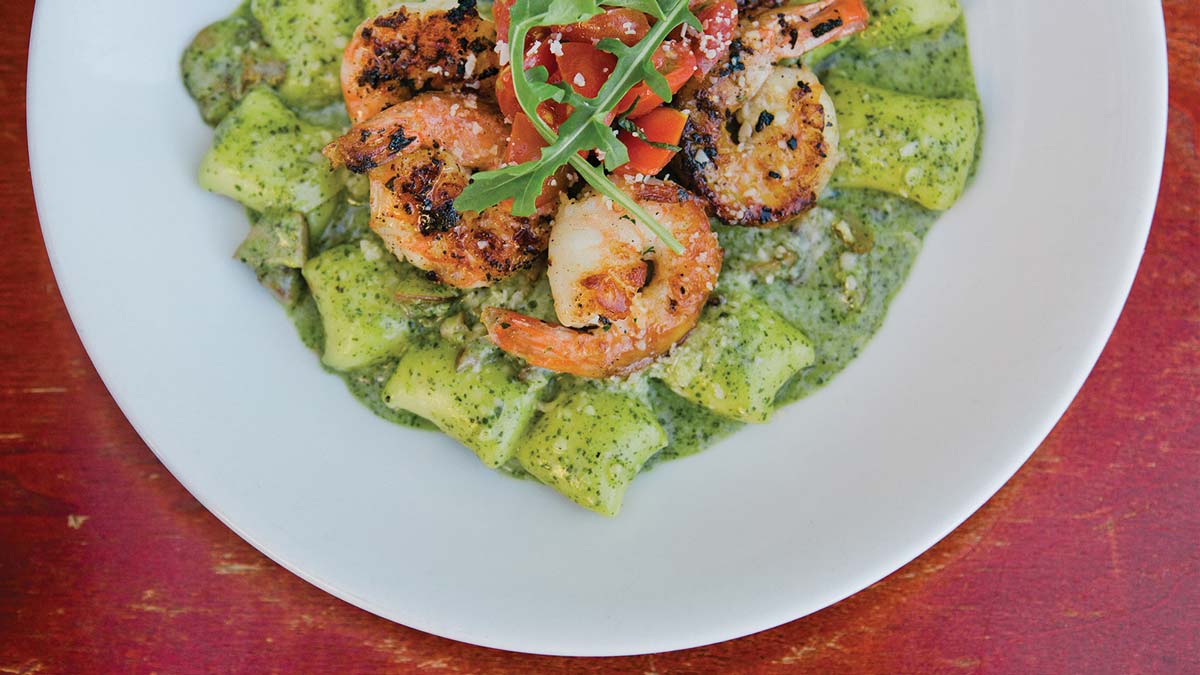 
1 In an açaí bowl, you’ll find granola, bananas and strawberries over a housemade açaí fruit smoothie.
2 The açaí bowl is one of the most popular items on Café Brasil’s
menu, especially for take-out.
3 In the restaurant, there’s an open “açaí bar,” which is the first thing you see as you walk in. You can watch them make your bowl right in front of you.
4 Café Brasil also has a juice bar with an açaí smoothie similar to the bowl.
5 Even before the acai craze, Café Brasil was a local breakfast institution, and crowds can be seen outside waiting for a table every weekend. AE

1 The meat at Betty Burgers is organic and grass-fed, with no hormones and no antibiotics—and never frozen.
2 All burgers are made with local produce, and all burger sauces are made in-house.
3 Two of their most popular burgers are the Texas Two Step and Point Grinder.
4 There is a full bar in their downtown Santa Cruz location.
5 Not even the staff can totally explain the slightly salacious touches to the menu like “Betty On Top,” “Rough and Ready,” “Betty Likes It Tender” and “Nachos O’Lay.” The secrets behind this mystery are much-debated in the GT office. AE

1 Manager/partner Andre Beauregard and deli manager Allisyn Bordwine spend quality time at the Fancy Food show in San Francisco, comparing endless varieties and cultures of cheese.
2 The store carries 19 categories of cheese, some aged up to six years, and dozens in specific classes, such as smoked or cave-aged.
3 Shopper’s cheeses come from many countries, including Italy, France, Holland, England, Ireland, Bulgaria, Finland, Norway and Spain, in addition to domestic varieties.
4 The latest trend is grass-fed and free-range (as in the cows), as well as raw non-pasteurized cheeses.
5 Enzymes found in non-pasteurized cheese help with digestion, but are stripped away when pasteurized. JS


1 Staff say the housemade pretzels are the most popular menu item for couples on a date.
2 Attention to aesthetics is important to the managers at Cremer House, and the vibe is warm and comfortable.
3 The housemade butterscotch cookie with Mission Hill Creamery caramel ice cream is the most popular dessert—and perfect for sharing.
4 The folks at Cremer House believe in keeping their cuisine as organic and locally sourced as possible.
5 They’re also known for handcrafted beers to share, and sparkling wines. AE

1 On weekdays, Gary sets up shop outside U-Save Liquor, and on weekends in the Swift Sweet Courtyard, where he suggests having a glass of wine with his hot dogs. He retired from the wine business and decided to put the hot dog carts he had “sitting around” his house to good use.
2 Gary calls his hot dogs “snappy dogs” because they make a delicious snapping in your mouth after a bite. He also jokes that in Pretty Woman they use the term “snap dog,” but he thought of it first.
3 There’s a homemade chili sauce option, but the most popular item is the classic hot dog with condiments. The classic hot dog is a beef dog with a sheep casing.
4 His dog, also named Snappy, can often be found hanging out under the stand, and occasionally comes out to say hello.
5 Other options on the menu are Louisiana Hot Link, Polish Sausage, Chicken Italian Sausage, Cheezy Bavarian, and Smoked Lamb Sausage. AE


1 Owner Joe Moreno and family are proud of Lillian’s numerous wins in GT’s Best of Santa Cruz County awards, the first of which was for Best New Restaurant in 2008.
2 The newly constructed, much larger space just down the street at the corner of Seabright and Soquel is set to open by May 1, with staff training beginning in April.
3 Seating capacity will be 74 in the dining room and 10 at the bar—which will also offer the regular menu—at the new location.
4 It took Moreno six years to buy a larger space in the same neighborhood.
5 Popular items on the menu will remain, with fresh seafood available daily. “Frozen” is not in the chef’s vocabulary. The kitchen will have an isolated area to prepare gluten-free pasta and other items. JS

1 Otoro’s menu is best known for its live seafood.
2 Regulars love it when Otoro occasionally gets in live sea urchin.
3 They get their seafood from a company in San Francisco.
4 If you’re new to the idea of eating live seafood, you can check out Otoro’s Facebook page, which has videos of chefs preparing meals.
5 A popular dessert is the ice cream crepes—vanilla, green tea or chocolate. AE


1 Alfaro produces 10 different Pinot Noirs and five Chardonnays, in addition to Albariño, Gruner Veltliner, Zinfandel, Syrah, Merlot and a soon-to-be-released sparkling wine.
2 Of the 56 acres of grapes planted, eight are CCOF-certified organic.
3 A love of travel has taken Richard and Mary Kay Alfaro to Cambodia, Vietnam, Spain, Cuba, Guatemala, Peru, Turkey, Croatia, and Portugal.
4 Their son Ryan will work his first harvest in the family vineyards this fall, after graduating from UCLA. He’ll pursue a degree in wine science through the University of Auckland in New Zealand.
5 Families with children and pets on leashes are welcome to the tasting room, open on Saturday. Complimentary juice, coloring books and dog biscuits are provided. Don’t mix up who gets what. JS

Ella’s at the Airport

Ella’s at the Airport