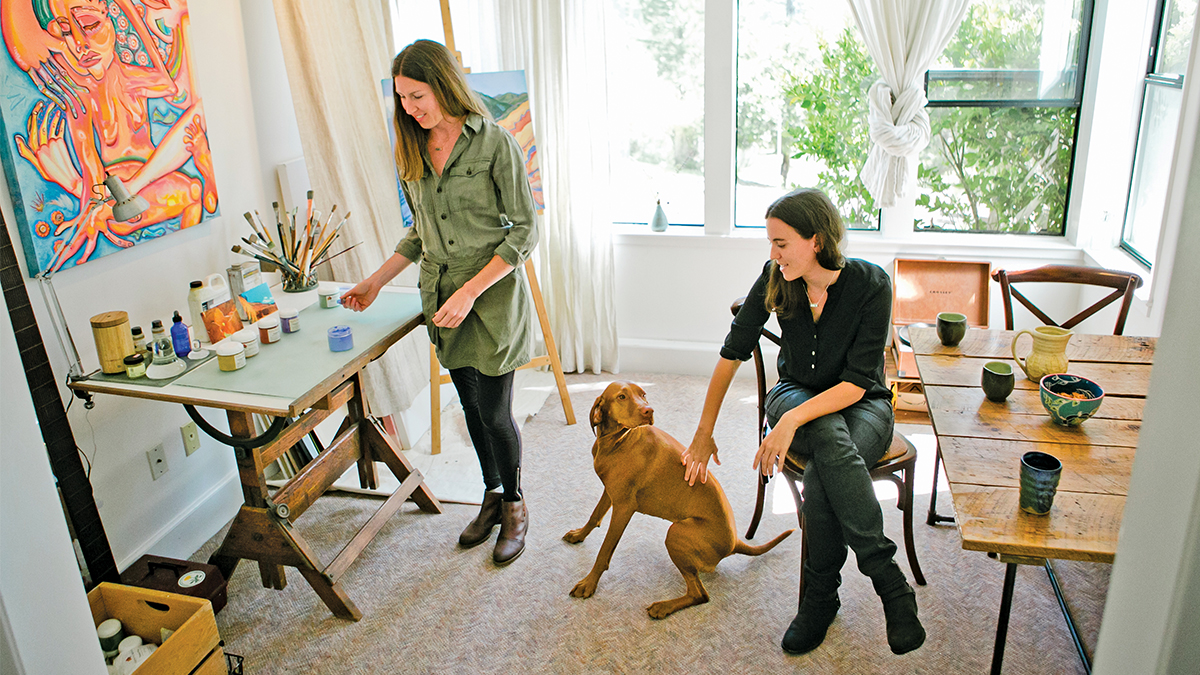 There’s been no shortage of excitement recently for filmmakers Dana Richardson and Sarah Zentz. Between close calls with drug lords while filming in Mexico and evacuating their home in Big Sur, the duo has plenty of stories to tell.

Zentz and Richardson collaborate on documentary short and feature films. Their most recent feature film, Goshen, is about the indigenous Tarahumara running tribe in Mexico’s Copper Canyons, and is currently in rotation on PBS. The making of Goshen was scary to say the least, since the Copper Canyons have the highest mortality rate in all of Mexico due to drug cartel activity.

“There are no paved roads or access, so it’s a great hiding place for narcos to have opium fields,” Richardson says. “We actually got left there and were pretty fearful for our lives. It was kind of a traumatizing experience.”

Though they are by no means done with filmmaking, they recently started focusing on running independent art businesses. Richardson is an oil painter who focuses on expressionist female portraits and landscapes. Zentz is a jeweler who works with reclaimed redwood, sustainable abalone and Fairmined precious metals to create stunning one-of-a-kind earrings and necklaces.

Their cabin in Big Sur was completely off the grid and supplemented by a generator, sporadic wifi, and hoop house gardens. It was the perfect haven for creative thinking and artistic expression, and while editing films was difficult with limited internet, they say the views alone made it worthwhile.

“It was like being in a little heaven. We were able to block off the world,” Richardson says. “You wake up and there is no connection to anything but nature. For an artist, you want to be constantly inspired and shut everything out, and for us that was it.”

It was all very romantic, with 180-degree ocean views, an outdoor deck and 200 acres of perfect land, and they thought their nightmarish days were behind them. Then the land, and their driveway, began to slide down the hill.

Last May, over a million tons of rock and dirt shifted and slid down the mountain, took out Highway 1, and slid into the ocean. The Mud Creek Landslide was one of California’s largest landslides ever, and Richardson and Zentz had a front row seat leading up to it.

“I remember there were giant boulders falling into the road. We could hear them at night and I was just thinking ‘please don’t bash into the car or house,’” Zentz says. “There were a couple really big ones that fell into the driveway, so we were trapped up there for a couple of weeks.”

Luckily, with the help of a few ranchers they were able to evacuate before the landslide. They returned to clear out their belongings and beehive only weeks before the landslide. They were renting the cabin, which they later learned was unpermitted. Though the slide didn’t take out the cabin, Richardson says that CALTRANS anticipates it won’t last longer than a year since the land is still moving and shifting. Despite the odds, they say their landlord is still hoping to attract new renters with a disclaimer “not for the faint of heart” in the ad.

“By the end, we were pretty over it,” Richardson says, laughing.

They moved to Santa Cruz six months later; now they have reliable internet, and the grocery store isn’t an hour and a half away. They are the new kids in the Santa Cruz art scene, and are quickly finding how passionate the arts community is, and that people aren’t particularly fond of off-leash dogs.

“It’s a strange thing to be in civilization again,” Zentz says, adding their dog has never been on a leash before, ever.

While they both value nature, working outdoors and traveling, they agree that they are different in many ways.

“We bring polar opposite ideas to the table a lot, and overall that dynamic ends up working for us in filmmaking,” Richardson says. “That’s where we come alive, going out and telling stories together.”

When it comes to painting or crafting, they say, it’s best they keep their art separate.

“I tried to help her make jewelry once, and I got fired the first day,” Richardson admits.

“She sanded the entire side off,” Zentz says.

Both work with sustainable materials in their art. Richardson uses natural paint pigments and oils, and Zentz recently became a Fairmined licensee, meaning that she only buys and sells sustainably sourced gold and silver. A standard 18-karat wedding band leaves behind 20 tons of ore and waste rock, according to Earthworks, a “No Dirty Gold” mining watchdog group.

Though using sustainable materials isn’t always easy—it often ends up costing more and isn’t necessarily cosmetically better—both Zentz and Richardson say it feels like the right thing to do.

The two are currently showing and selling their work at Artisans Gallery, where Richardson was the featured artist last month. While they are planning on making another feature film sometime in the near future, for now Santa Cruz is the new home base for some much needed R&R.

“It’s the perfect community for us. There are so many people that are artist advocates and supporters and are environmentally concerned,” Richardson says. “It has nature and wild space with a great arts community. It’s where we want to be.”

For more information about Zentz and Richardson, visit sarahzentzjewelry.com and danarichardsonartist.com.

Next ArticleE-Bikes Surging as Santa Cruz Readies for Bike Share