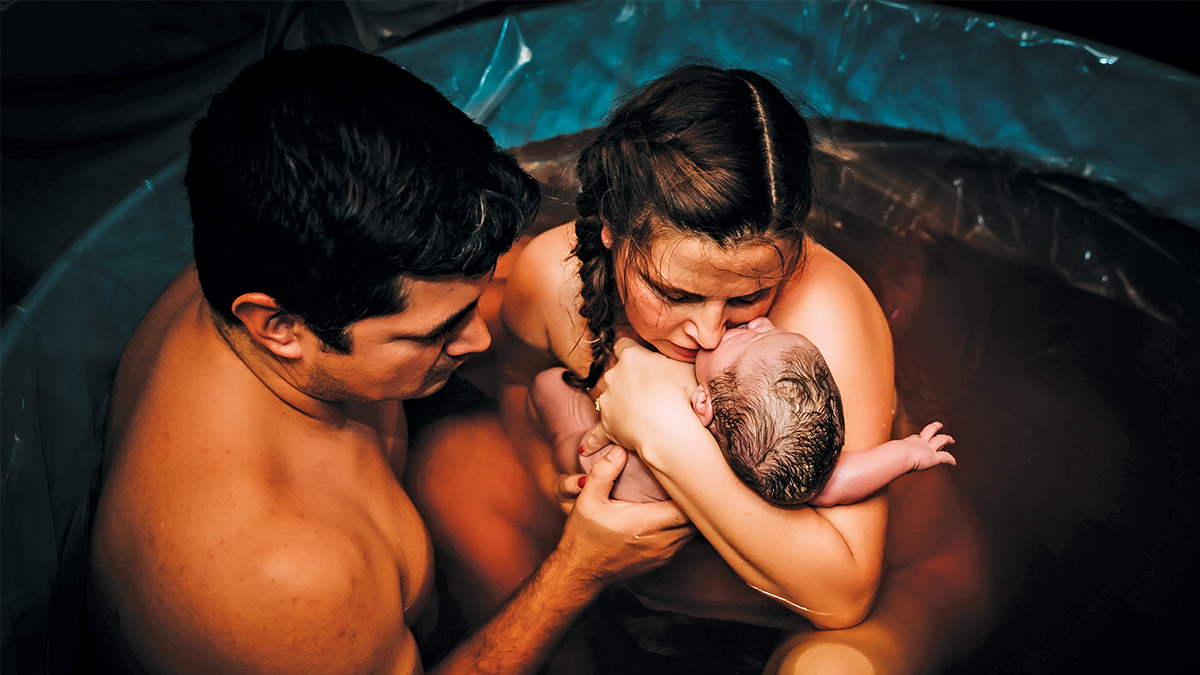 [dropcap]I[/dropcap]t may take a village to raise a child, but sometimes a child can raise the hopes of a community. So it was with Luke Luna, who Santa Cruz County welcomed as a new resident on Dec. 21. While everything went perfectly well, this was no ordinary birth. Weighing in at eight pounds, 11 ounces, little Luke became the first person in the county born in a non-hospital-associated birthing center in 44 years.

“This is significant because it’s all about choices,” says Full Moon Family Wellness and Birth Center founder and midwife Sunshine Tomlin. “It’s about making sure everyone has as many options as possible, because much of the safety lies in the comfort of the family.”

Instead of going for a hospital birth, Luke’s parents—Ben Lomond residents Larry and Licia Luna—chose Full Moon after reading GT‘s cover story one year ago (“Born this Way,” 3/8/17) on the center. The proud new parents said they picked it because of the peaceful atmosphere and the level of independence it gave them.

“I wanted to be in control of my experience,” Licia Luna says, adding that hiring Tomlin as a midwife gave her an experience she could cherish. “Going into birth with someone who you feel is your friend and that you can trust made it really comfortable and easy.”

In addition to welcoming Luke into the world, Full Moon Family Wellness and Birth Centers are celebrating another achievement: their upcoming anniversaries. The Family Wellness Center opened shortly after the lease signing in May 2016, and the Birth Center opened a year later, after receiving all of their permits. Since then, Full Moon has focused on creating a unique and soothing atmosphere for new parents with their trained staff of 10 to 20 employees on call at any given time. Tomlin alone has 21 clients, and says they are expecting seven more births between now and September.

In addition to their midwives and doulas (the latter of whom act sort of like childbirth coaches), Full Moon also offers classes in child development, partner relationship courses for during and after birth, chiropractic and massage therapy and even training in how to swaddle and wear newborns in the plethora of carrying devices currently on the market.

“It can be so overwhelming when you have a baby,” says Luna. “I always thought I’d use a certain type of wrap, but [Luke] doesn’t really like it. And when you go online you realize there’s so many other types.”

“We’re looking forward for this to be a place for people to come for well-being care of all kinds, even if they aren’t pregnant,” Tomlin says. “They can come in for a massage or acupuncture, and it doesn’t have to be related to birth.”

While the fledgling center continues to grow, they are still dealing with some labor pains. When GT last spoke with Tomlin, she was raising money to remodel the center with new amenities including plumbing—adding a shower and birthing tub—along with new paint, carpeting, beds and sheets. Originally estimated at $50,000, Tomlin now estimates they will need $75,000 for the remodel, $24,250 of which has already been raised through their online GoFundMe campaign.

“There’s a company that makes a permanent, ergonomic birthing tub that is willing to give us a discount on their floor model,” she says. “Now we just have to raise the money for actually bringing the pipes into the room, and that will be a large expense.”

This May also marks the one-year anniversary of the county’s Nurse Family Partnership (NFP). The national program began in 1977, and is now featured in 43 states and 22 counties throughout California. Intended for first-time parents, NFP’s local staff of four nurses—two of whom are bilingual—provide long-term care for up to two years after the child’s birth. Patients must enroll within the first 28 weeks of pregnancy and qualify as low-income via MediCal.

“It’s an evidence-based program, and studies have shown it has more of an impact for those who have less means,” program administrator Jennifer Herrera explains.

NFP follows what Herrera calls a “whole person” model. This means providing expectant and new mothers access to job fairs, or linking them to life-assistance programs like electricity bill reduction, food stamps and more. The results add up to long-term savings for local, state and federal governments. By NFP’s own data, more help with independence means lower second birth rates and lower reliance on government programs in the future.

According to the Nurse Family Partnership national website, the impacts are significant. By conservative estimates, NFP saves the government $19,342 yearly per family. Societal benefits include fewer preterm births, fewer infant deaths and a reduction in youth crime and substance abuse.

Although teen pregnancies fell 4.9 percent from 2014 to 2015—with 2015 being the most current census of Santa Cruz County’s birth rate—Herrera admits a majority of the NFP patients range from 15 to 24 years old, although age is not a requirement for enrollment.

The program currently has 60 families enrolled, but Herrera says the NFP can enroll up to 100.

“It’s a ‘home visiting’ program, so nurses are expected to see patients face to face,” she says. “Typically in the home setting, but wherever the patient feels most comfortable. Whether it’s home, Starbucks or the park. ”