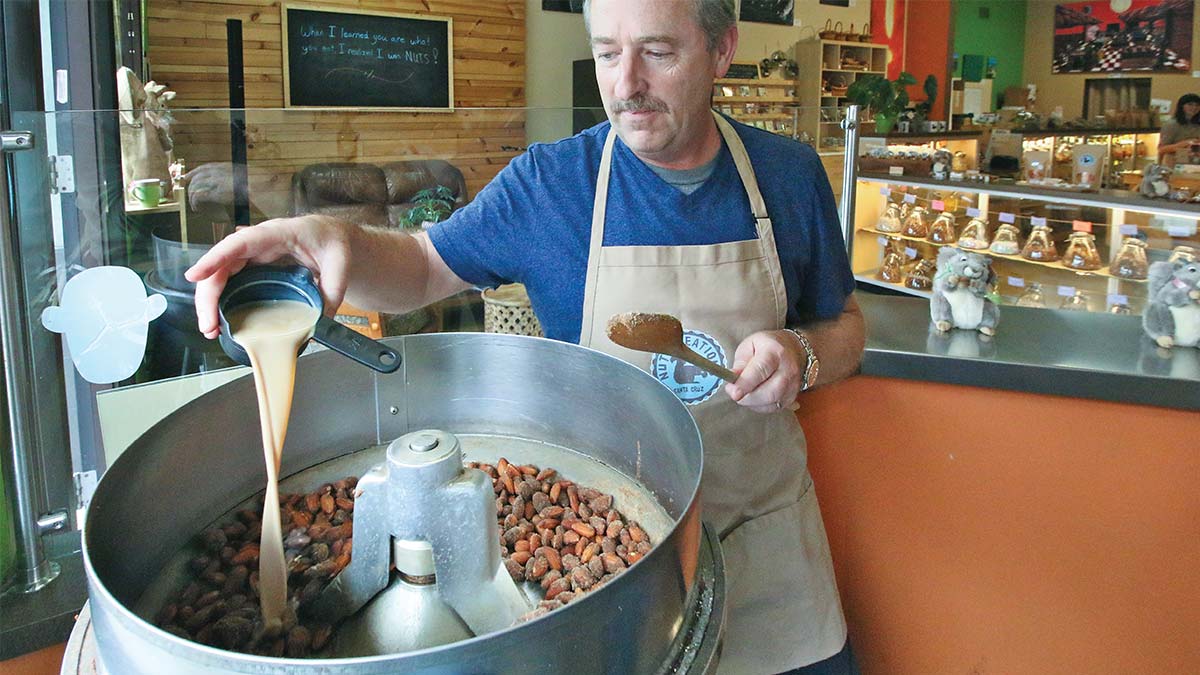 I’m standing next to Craig Olsen’s pralinator, and I’m pretty into it.
It’s a Saturday afternoon, and Olsen, who owns Nut Kreations with his wife Tami, is cooking up a batch of Bailey’s roasted almonds right up by the front window of the store. He pours a mixture of brown sugar, water and cinnamon onto the nuts in the pralinator—a shiny, midsize industrial machine for caramelizing in the kitchen—and as he brings it to a boil, the almonds hardening as the moisture around them evaporates, he pours in the Bailey’s Irish Cream. I’m marveling at this pralinator, which costs thousands of dollars and doesn’t so much as scratch the nuts as it cooks their candy shells on with military precision. I get it, I think to myself. This is the secret weapon, the Death Star of nut entrepreneurship.
But oh, how little I understand. Because just a couple of minutes later, Olsen points a few feet away to his real secret weapon, which is a fraction the size of the pralinator, made of plastic, and costs about 15 bucks at Target.
“That fan is one of my biggest things,” Olsen says of the little oscillating portable near the store entrance. “I blow the smell out the door. This is my marketing. I’ve had people say they were like six blocks down, and they just followed their nose all the way into the front door. It just works.”
I can understand why it does. There’s something about the smell of roasting nuts; standing next to Olsen’s current batch, my olfactory senses are generating a bizarre Christmas-in-July scenario for my brain that makes me feel warm all over—although the pralinator does cook to 400 degrees, so maybe this isn’t entirely psychological.
More than that, though, is the promise of flavor I haven’t experienced. For me, that’s huge. You know when you’re walking by a bag of potato chips in the supermarket with some janky new flavor like “habanero maple pizza crunch,” and you’re thinking, “Who would even try that?” The answer is me. I would try that, at least once.
Olsen is my flavor-seeking soulmate, I can tell. Not just because his store is full of all kinds of crazy flavor permutations already, but because he’s up in this window cooking every weekend and Wednesday afternoon, looking for the next great taste.
“A lot of this has been experimenting,” he admits. “I love to cook, so part of this for me is I’m passionate about it and I want to see if something works or not. The only way to figure out if it works is you’ve got to just do it. And then we do tastes. So we’ll do something new, we’ll put it in taster cups, and I’ll send somebody out on the corner to get feedback on it.”
There are moments of uncertainty for sure—he still isn’t totally convinced he got the right amount of ginger in the honey ginger pecans, and he’s got the sriracha cashews on the verge of being declared a biological weapon trying to make them spicy enough for the heat freaks.
“What I was surprised about was how much hot sauce I put in them, and still people wanted more,” he says, with a tone of genuine bewilderment. “Forget just sriracha, I put Tabasco, I put Tapatio, I put cayenne pepper—I would shake it like it was going out of style. Still, people would come in and go ‘Yeah, it’s getting better, but it’s not hot enough.’ I’m like, oh my god! And literally people would come in here and cry. They’d walk in the front door and be crying, because the place is full of hot sauce. I’m like, ‘how much hotter can I get it without driving everybody out of my store?’ Plus me too, I’m crying, I’m a mess! I need a box of Kleenex every time I’m cooking it.”
But the hazmat work is paying off, especially since James Beard Award-winning chef Michael Mina started picking up his product for 49ers home games. This will be Olsen’s third year of that, and he’s never given them the same product twice. It’s led to a lot of mail orders, but his third-party business is expanding, too. Nut Kreations is in demand at resorts and hotels like Ventana in Big Sur, and Chaminade, Seascape Resort and Hotel Paradox locally. They’re at the Del Mar and Nickelodeon, the Rio Theatre, beer places from Oakland’s Good Hop to Soquel’s Beer Thirty, and even Los Angeles movie sets, thanks to directors and producers discovering Nut Kreations at Beverly Hills yoga studios.
Then there are my fellow flavor hounds, like the guy who first suggested to Olsen that he do the Bailey’s roasted almonds we cooked (and which turned out amazing, like the holidays on a sugar high). He had just gotten out of the army after being stationed in Germany, where Bailey’s roasted almonds are seriously a thing, and he needed a fix. Olsen happened to have a bottle of Bailey’s in the store, so he told the guy to come back in an hour to “see if I got ’em right.”
“He was amazed that I did it,” says Olsen. “Now he and his wife, they call me to make sure I have it before they come to the store. And they buy a couple of pounds at a time. They’re serious about it.”