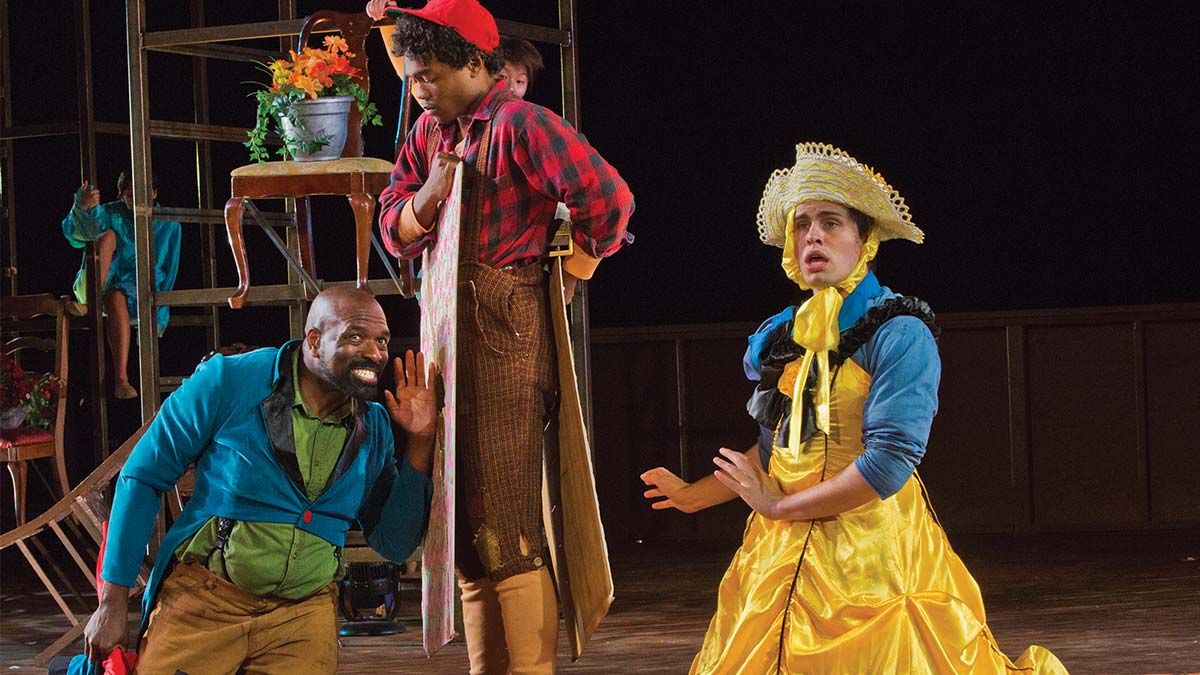 It’s fitting that Santa Cruz Shakespeare chooses A Midsummer Night’s Dream as the inaugural production for its spanking new venue at DeLaveaga Park. That they even got the stage erected in time for opening day is no less a feat of magic than anything devised by Puck and his fleet of fairies. The set and costumes may be minimalist, but a wonderful cast performing Shakespeare’s beloved comedy, and a sense of adventure on both sides of the stage, keep patrons happily engaged.
First, the facts: the Festival Glen at UCSC is no more, at least as a performance space for this company. Ousted by the university (which retained the original name, Shakespeare Santa Cruz), the company has risen phoenix-like, rebranded itself as Santa Cruz Shakespeare, and found a new home in DeLaveaga Park. City Council approval to build the new space was only granted in February of this year, meaning SCS has had a scant five months to complete construction.
The stage nestles in a grove of pine and eucalyptus, with an open space for picnicking in front of tiered rows of permanent benches and chairs. Sightlines are good, and the box office, restrooms, and parking lot are all immediately adjacent to the performance space (so you no longer need hiking boots and GPS to navigate to the stage area). Named in honor of the company’s intrepid co-founder and tireless supporter, the space is called Audrey Stanley Grove. Once you drive all the way through the golf course, turn right at the Club House and keep going.
Director Terri McMahon begins her production with youthful fairies wandering onstage with pillows to fall asleep in comical poses. The play’s four plots quickly kick in. An extravagant wedding ceremony is about to be held for Duke Theseus of Athens (Cody Nickell) and the Amazon Queen Hippolyta (Mia Ellis). But first, a noblewoman, Egea (Carol Halsted) brings a suitor that her daughter, Hermia (Katherine Ko—appropriately little and fierce, also funny), refuses to marry, Demetrius (Brian Smolin)—formerly engaged to Helena (Mary Cavett).

The set and costumes may be minimalist, but a wonderful cast performing Shakespeare’s beloved comedy, and a sense of adventure on both sides of the stage, keep patrons happily engaged.

But Hermia and Lysander (Kyle Hester) are in love, so that night they run away—followed by Demetrius, who is followed by Helena. All are soon lost in the forest, where Oberon and Titania, the king and queen of the fairies, (also played by the commanding Nickell, and the warm, regal Ellis) are having a tiff. Meanwhile, some tradesmen of the town are rehearsing a play to perform for the duke’s nuptials.
This amateur troupe is led by “Penny” Quince (usually called Peter, a male role), whom Kate Eastwood Norris plays as a kind of imperious librarian with a funny, loopy trill to her voice. Most enthusiastic of her crew is Nick Bottom, all too eager to take on every part in their show, played with endearing comic bombast by Bernard K. Addison.
Unseen by the mortals, Oberon commands his cohort, the wily Puck (Larry Paulsen), to work a love charm. (That Nickell and Paulsen manipulate an invisible love potion by mime and sound effects, using no props whatsoever, is hysterically effective.) But it goes awry: both Athenian men are suddenly smitten by the increasingly perplexed Helena. (Smolin, so good last year in The Liar, is a riot as lovesick Demetrius.) Meanwhile, the fairy queen falls instantly in love with Bottom—who has acquired the head of an ass (symbolized by a pair of donkey ears in typical productions, although costume designer Christina Dinkel also outfits Addison with equine legs, tail, and a furry loincloth).
Dinkel’s costumes are simple and effective. (It’s funny that she dresses sidekick Puck like Smee in Peter Pan, with piratical striped stockings and headscarf.) Collette Pollard’s smart, stark forest set features towers of metal bars, through which we see the actual trees beyond, while the random chairs they sprout are used as fairy perches, or piled up to make thrones. And all is beautifully lit—especially those trees—by lighting designer Kent Dorsey.
It may not be as ornate as some versions of Dream, but the sheer cleverness of this minimalist production makes us eager to see what SCS does next.

INFO: The Santa Cruz Shakespeare production of ‘A Midsummer Night’s Dream’ plays through Aug. 28, at the Grove, DeLaveaga Park. Call 460-6399 or visit santacruzshakespeare.org/tickets.