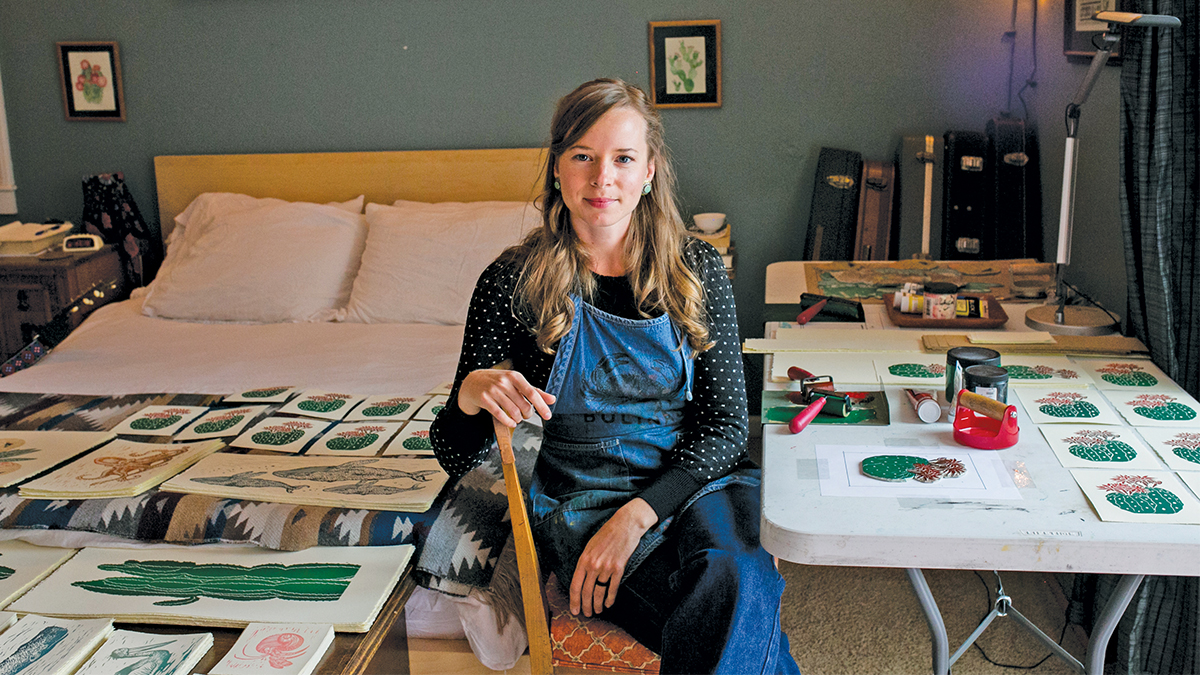 In a small room filled to the brim with beautiful botanic prints, frosted light bulbs and scented candles, Lili Arnold is making magic happen. Though succulent season is over and cacti have gone dormant for the winter, they are Arnold’s printmaking specialty year-round.

Specializing in botanical printmaking, Arnold can make anywhere from 15-50 prints daily while also maintaining her website, numbering and packaging her work, and freelancing. She’s a bit of an anomaly—at only 28, she’s made printmaking into a full-time, successful career from the comfort of her bedroom.

The remarkably tidy 300ish-square-foot studio-bedroom is home to countless paint tubes, around 50 linocut blocks and several mandolins, each of which fits comfortably in its place. Cozied up with a knit sweater and herbal tea, Arnold sits at a makeshift portable table next to her bed.

“Most people are surprised I work out of this room,” she says, looking around it. “I have to be very careful about putting things away and cleaning up so that the clutter doesn’t get out of control.”

But don’t be fooled by the immaculate cleanliness of the carpet or her perfect wavy hair; Arnold is a very busy woman. She’s prepping for the holidays, she explains, apologizing for the prints sprawled across her bed and about the room. With several large protea susara prints hanging over her sink, it’s a wonder she manages to brush her teeth.

“I’m going to start running out of space,” she says. “I am already maxing out here.”

She gestures around the room as she explains how what began as a hobby unexpectedly blossomed into a career. Since graduating from UCSC with an arts degree in 2011, she spent several years in graphic design and textile printing and only took up printmaking as a weekend creative outlet. Amid a pop culture obsession with drought-tolerant plants, her work garnered more interest, and and she eventually began selling it in local shops and online.

Since her work isn’t traditional fine art, she’s her own salesperson—no Sotheby’s here. She admits readily available art online may be taking away some value from fine art, but says that overall, art is much more accessible than it’s ever been. An online presence can make or break a career—and in her case, having more than 100,000 followers on Instagram (@liliarnoldstudios) has its perks. The majority of her direct sales come from social media.

“That is the only reason why I have been able to do this, because of Instagram,” she says. “The only way I make direct sales is by promoting on Instagram and Facebook. I don’t know what I would do without it.”

With her worldwide clientele, it’s fair to say Arnold has made a pretty big name for herself. Her followers ask her for advice on materials and processes, and she often meets other artists through her social media pages. She’s also expanded her wholesale retail to 15 locations from California to Colorado. Her most recent and popular cactus series showcases stunning iridescent blooms diluted by the symmetry and simplicity of their host cactus or succulent.

“It would be cool to start an entirely new series that’s graduated from the cactus, something a little more complex, a little more interesting,” she says, sipping her tea.

As the daughter of two artists, she says it was inevitable she would go into some creative arts field, though she acknowledges that she didn’t think her hobby would become a career, since the job landscape for art majors is a bit nebulous. But technology influences everything it touches, and art is no exception. Arnold hopes to take a brief break from social media to get back to her creative roots, but can’t stay away for too long, since her sales and promotion depend on it.

“Social media and technology are making art more accessible for people,” she says. “Whether its Etsy or Instagram, social media is giving artists a better chance to be seen and make a career.”

Next ArticleCan Santa Cruz Build Its Way Out Of a Housing Crisis?