.Can Santa Cruz Build Its Way Out Of a Housing Crisis? 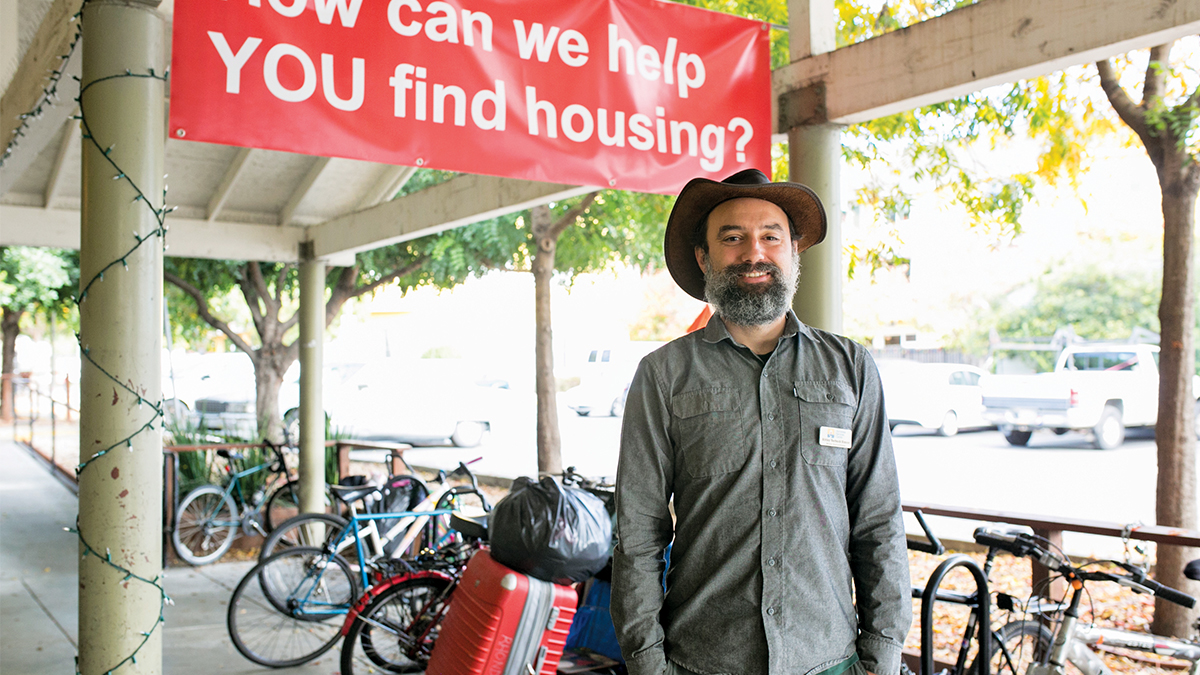 The students on the other side of the table that evening ran through a long list of beloved teachers and after-school employees who had all left over the years—each squeezed out by steep rents in a quickly evolving town.

“It’s really the fabric of the community that changes,” says Chase, who just this week wrapped up her year-long listening tour, during which she talked housing with locals at churches, in breweries and in their homes—in groups as small as three, and as large as 50.

Within the housing economy, Chase says teachers fall into an awkward gray area. Many make slightly too much to qualify for the deed-restricted housing created by the passage of Measure O 38 years ago. And yet, she explains, “they make just enough that they can’t afford the market rents.”

Meanwhile, rents are rising all over the West Coast. So is homelessness.

Here in Santa Cruz, Mayor Chase herself is a renter who once lived in an affordable Measure O unit. As her one-year term as mayor draws to a close, Chase’s tour is scheduled to culminate in a discussion during the Santa Cruz City Council meeting on Tuesday, Dec. 5 to examine the state of housing locally. A 40-page staff report will be online by Wednesday, Nov. 29, laying out everything Chase heard from the community.

She says that possible solutions may include revisiting fees for in-law units—also called accessory dwelling units or ADUs—and orienting new housing to be closer to transit. And the City Council, she says, supports finding new revenue to fund affordable housing, now that redevelopment funding has dried up. Former mayor Don Lane and former county treasurer Fred Keeley are working on a possible 2018 bond measure to do just that. Meanwhile, renters from the Lower Ocean neighborhood are clamoring for rent control, as well as increased protections for renters.

Behind all of this is a question with an answer as important as it is elusive: What are the best affordability rules for new housing developments?

Many Santa Cruzans say the current requirements are ailing an already fragile housing ecosystem, either because the rules are too loose or too strict—depending on who you ask.

When it first passed in 1979, Measure O required that 15 percent of housing units in a new complex be reserved as affordable. But once construction slowed years later, the City Council loosened those requirements to let developers pay an “in-lieu” fee to fund future affordable housing projects instead.

Worried that stiff requirements are yet again strangling the housing supply, the planning department has floated the idea of reducing the requirement, possibly down to 7.5 percent, to better meet pent-up housing demand.

Loosening those requirements may sound like a peculiar way to make housing cheaper, but Lee Butler, the city’s planning director, says that in order to bring down rents, the city has to meet demand and thus build more housing—even if it isn’t all “affordable.” And the tighter the city’s regulations, Butler says, the more difficult it is to build anything. “It’s going to take a lot of new housing to come online to create a dip in price, because we’re in such a deficit,” Butler says.

Maybe so, but City Councilmember Chris Krohn campaigned on the opposite idea when he successfully ran for election last year.

Krohn believes that new housing developments should make 25 percent of their units affordable, increasing that share from 15 percent. And he says it’s time to abolish the in-lieu fee, instead forcing developers to actually build their required affordable units. Far too little of the city’s housing is deed-restricted, he says. “Not all housing is equal,” Krohn states. “Building anything isn’t the goal.”

Krohn isn’t the only one suggesting that the city refuse to allow developments that don’t prioritize low- and middle-income tenants.

Pushing the envelope, attorney Gary Patton went so far as to call for a 50 percent affordability requirement in any new development, via a Santa Cruz Sentinel column earlier this month. Developer John Swift called that suggestion “asinine” during the Monterey Bay Economic Partnership’s State of the Region conference.

But Patton insists he is serious—even though he knows it’s a big ask. The former county supervisor admits that such a change could make it so incredibly expensive to build housing that nothing would ever get built again, although he thinks that’s OK because he doesn’t believe new housing construction could ever make a dent in affordability.

The evidence, however, shows that line of thinking isn’t true, says Sibley Simon, an affordable housing advocate. Simon has been deconstructing the data for a paper he’s writing about the housing in the region. He found that for a two-year period starting in 2013, virtually no new units got built, and any miniscule housing construction was likely canceled out by houses getting turned into vacation rentals. During that period, rents climbed 20 percent, Simon says, creating what he estimates to be an increase in demand of 2,500 units countywide.

Simon believes it would take fewer than 5,000 units—affordable or not—to get the county back to being “merely a very expensive place to live, as we were 10 years ago.” Even if developers built half that, Simon says it would make rents more manageable for renters.

Statewide reports have come to similar conclusions about the need for more housing construction because building has not kept pace with California’s population growth.

A report from the state’s Department of Housing and Community Development indicated that California needs to build 180,000 units per year for the next 10 years, essentially echoing similar findings from the state Legislative Analyst’s Office.

Of course, the reasoning behind Patton and Krohn’s thinking is simple enough—tie developers’ hands in hopes that it forces them to build more housing. But the logic behind the alternative is equally straightforward: There is too much competition for not enough housing, and so several hundred new units would provide some much-needed breathing room.

Worried about traffic and overcrowding, Krohn says the city should focus on other approaches, like building teacher housing. Superintendent Kris Munro tells GT that the city’s school district is currently looking into workforce housing with a feasibility study. While Simon supports that model, he says there’s a bigger ecosystem too that Santa Cruz can’t lose sight of.

Krohn realizes that if Santa Cruz tightens its affordability requirements, some for-profit housing developers may walk away, but he believes that’s all right because nonprofit developers—who are comfortable with slimmer margins—will take their place and step up to the table.

But here’s where that gets complicated: Simon, the executive director of New Way Homes, fits that profile perfectly. He’s busily preparing to submit a plan to build a 100 percent affordable complex within the footprint of Homeless Services Center. But even Simon says that there’s only so much nonprofit developers can do. Nonprofit developers, like himself, rely on grants to make their projects pencil out, and there’s only so much government cash to go around, he says.

When it comes to affordable housing, politicians and advocates often kick around the term “sweet spot”—the ever-elusive magical percent that would maximize affordable units without making developers walk away. Simon thinks that number could come in lower than the current 15 percent requirement, as does Don Lane, another longtime affordable housing advocate. However, they both say that whatever the number, it should have some flexibility, with special incentives—for instance, if an apartment building is going to be much bigger, it should have a bigger fraction of its units listed affordably. Or perhaps, Simon says, buildings with more affordable units should not be held to quite the same burdensome parking standards.

But Patton—a proponent of tightening, not loosening, the requirements—feels the typical laws of supply and demand don’t apply here in Santa Cruz when it comes to housing. The town can build as much as it wants, he says, and all of those homes will get snatched up by out-of-towners, who are either looking to commute to jobs in higher-paying Silicon Valley or use their new places as second homes.

Simon says the answer here is to build the kind of diverse housing portfolio that Santa Cruz wants to see—smaller units for locals, and not vacation homes by the beach. And anyway, the problem may not be unique to Santa Cruz. The Legislative Analyst’s Office found that a 10 percent increase in rents in one county leads to a five percent increase in the neighboring county.

Patton says living in a desirable community like Santa Cruz carries an unfortunate curse. He notes that 2015 research out of the University of British Columbia found that startling numbers of homebuyers in Vancouver were coming from Asia, and condominiums there began to sit vacant, almost by the city block.

Since then, however, Vancouver has created a tax for empty housing units, as well as on foreign homebuyers. Butler says that, on the suggestion of local activists, city planners are looking into both of those ideas.

“Different country—and the legal questions would need to worked out,” Butler says. “But it’s great that we have an involved community that’s seeing these things and saying, ‘Hey, this is something we should be thinking about.’ The more people get involved, the more of a difference we can make.”

Mayor Chase has a lot of memories from the past year’s listening tour. Some people cried as they recounted their struggles. Chase was frankly surprised that, during the whole year, she did not hear anyone say that Santa Cruz should not allow any new development whatsoever. The question is clearly where to put the development. And when pulled together, Chase says, the varied comments on housing construction are difficult to view through one big lens.

“Nobody said ‘nowhere,’ but then it was ‘not here—somewhere else,’” Chase says. “Where that somewhere else is, I don’t know. Because when you add up those ‘not here’s, it ends up being nowhere.”