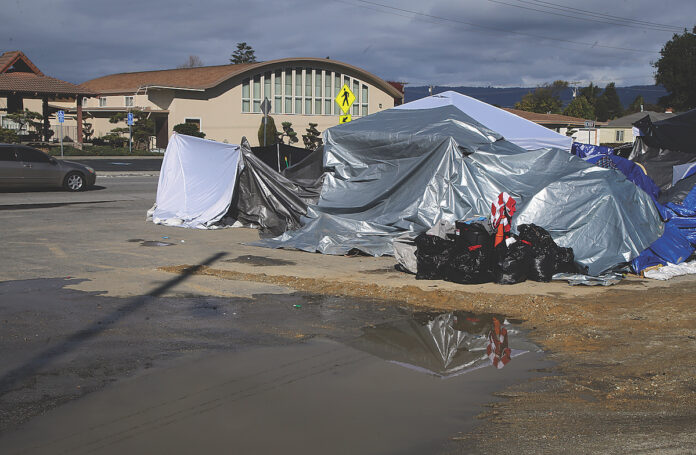 WATSONVILLE—The city of Watsonville and a local homeless union have come to an agreement that will dismantle the encampment on Bridge Street where some 25 people are currently staying.

The two parties hammered out the terms of the agreement in a whirlwind series of telephonic court hearings under federal judge Maxine M. Chesney that began at 8am Wednesday and concluded just before 3pm.

The agreement will protect the encampment into the new year while the city works to relocate the campers into alternative shelters. They will offer them, among other things, a five-day stay at local hotels and motels and connect them with nonprofits and other services that will aim to find them permanent housing.

If all goes according to plan, the camp will be dismantled on Jan. 3.

Wednesday’s action brought to an end a two-week dispute that started when members of the Pajaro/Watsonville Homeless Union were evicted from the Monterey County side of the Pajaro River levee on Dec. 13.

Looking for shelter from the atmospheric river that pounded the Central Coast, the people moved from the river banks to the parking lot across the street from the Buddhist Temple.

The city had twice threatened to break up the camp before the homeless union’s attorney, Anthony Prince, general counsel for the California Homeless Union, filed a lawsuit in the U.S. District Court for the Northern District of California on Sunday seeking a temporary restraining order against the city.

Despite the lawsuit, the city had planned to follow through on plans to clean out the camp Wednesday morning. But judge Chesney was assigned to the case late Tuesday and the city halted its efforts to allow Wednesday’s hearing to proceed.

Prince, in his closing remarks during the hearing, said that he still had several concerns about the city’s actions and that he planned to file a new lawsuit against the city that would challenge whether it had the right to break up homeless camps.

The original suit, which has been withdrawn, claimed his clients would be dealt irreparable harm if they are moved without meaningful alternative shelter.

Previous ArticleThings To Do in Santa Cruz: Dec. 22-28

Next ArticleToys for Tots Co-Founder Retires