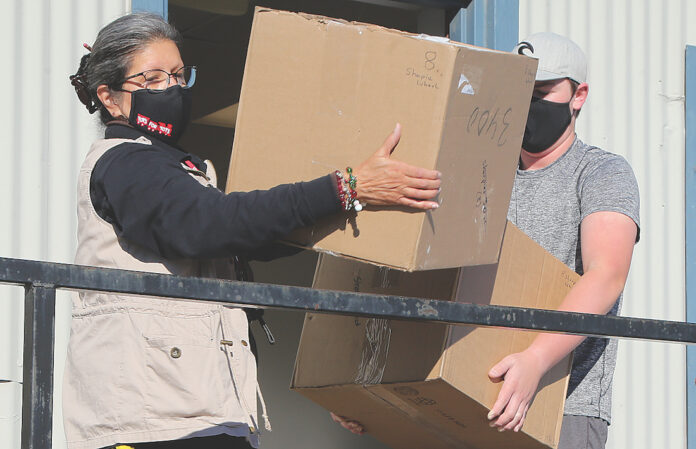 WATSONVILLE—After 33 years behind the wheel of the Toys For Tots program in the Pajaro Valley, coordinator and co-founder of the Santa Cruz County chapter, Delilah Valadez, handed out her final batch of toys on Dec. 4.

Although Toys For Tots will continue, Valadez says she is ready to hand the keys to another leader.

“The bittersweetness is rising in me as this thing winds down,” Valadez said as she was aided by others in loading toys into vans at a warehouse on Walker Street.

Santa Cruz County Toys for Tots spawned after the 1989 Loma Prieta earthquake. Valadez teamed up with then Watsonville Fire Chief Don French to begin the mission of getting toys, books and bikes to needy children.

Since then, they have handed out more than 380,000 toys, and 100,000 books to around 150,000 kids. Co-sponsors include Watsonville and Central fire departments, Cal Fire and Boulder Creek Fire.

Toys for Tots is a volunteer-driven program run by the U.S. Marine Corps Reserve which distributes toys to children of families whose parents cannot afford to buy them gifts. The program was founded in 1947.

Donated toys are wrapped by volunteers and then handed to a host of local agencies who distribute them.

On Dec. 4, Trevor Davis, a social worker supervisor with Santa Cruz County’s Family and Child Services, arrived with a large cargo van and his children to load it up with toys.

“This program is so huge, I mean, these gifts are for foster children,” he said. “This gives these kids a chance to have a normal Christmas and [shows them] that people are out there thinking of them. It’s truly amazing.”

Shannon Spencer of La Selva Beach says she brought her two children to the warehouse to volunteer. She heard of the program through her neighbors, she says.

“And our family has been helping ever since. It is a great way of teaching my kids to understand a broader picture, that not everyone is getting what they need,” she said. “And what a great time to give, to help others at Christmas time.”

Valadez says that while she plans to move on, the doors are open for someone else to run the show.

Retired Watsonville Fire Capt. Matt Ryan, who also played a big role with the program as chairperson for three decades, says Valadez “set this whole thing up for nothing but success.”

Each Christmas, Ryan and a crew routinely hauled mountains of gifts donated by students at Salesian School in Corralitos and other locations in an antique fire truck.

“Matt is so generous and he knows how to work his network to get big things done,” Valadez said. “We’re just so grateful for people like Matt and the tons of volunteers that help year after year. And children coming to the aid of other children is so powerful.”

Ryan says he volunteered with Toys for Tots throughout his three-decade firefighting career. He joined firefighters like Rick Pettigrew, French and a long list of others on the mission.

“Luckily we are surrounded by good people,” said Valadez, who worked for a wealth of nonprofits and managed special events outside of her work with Toys for Tots.

She says she does not have plans for what’s next.

“For now, I just want to put my feet up and enjoy some chocolate,” she said.

When asked about her success with the program, she added: “It’s not just about moving toys; it’s also about moving warmth and joy.”