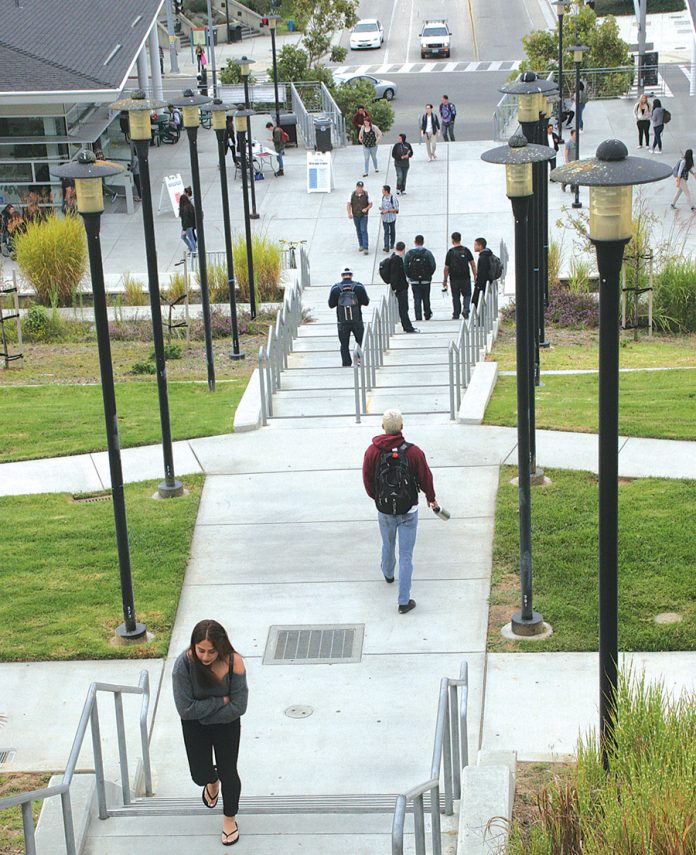 The graffiti has since been painted over.

Neither school officials nor the Sheriff’s Office was willing to say what, exactly, the graffiti spelled out.

The vandalism occurred on Feb. 17 between 7am and 10pm, Wetstein said, during which several groups had access to the area.

“…and I would like to clearly communicate that there is no place at Cabrillo for racial intolerance or hatred of any kind,” he stated in a letter to the public. “To all who were subjected to this reprehensible message before its removal by staff, I would like to offer my sincerest regret and deepest assurances that Cabrillo College is committed to the fundamental dignity of every human being and to creating and maintaining a diverse and welcoming community, rooted in equality and justice.”

Cabrillo Trustee Steve Trujillo agreed and said that, as a gay Latino man, he likely would not have been elected decades ago due to societal prejudices that have since evolved.

Trujillo suggested that, if caught, the vandals should be required to repair the damage themselves.

“The important thing is that they look at what they damaged, how they damaged the community and that they need to make different choices,” he said.

The Santa Cruz County Sheriff’s Office Cabrillo Division is investigating the incident. Anyone with information is asked to call Sgt. Jordan Brownlee at 454-7755, and refer to case 2201263.

Wetstein says that any graffiti and hate speech on campus can be reported to the Santa Cruz County Sheriff’s non-emergency line at 471-1122, or to Cabrillo’s Title IX/Civil Rights Compliance Officer Anna Bartkowski at [email protected] or 477-3373.

Previous ArticleThings To Do in Santa Cruz: March 2-8