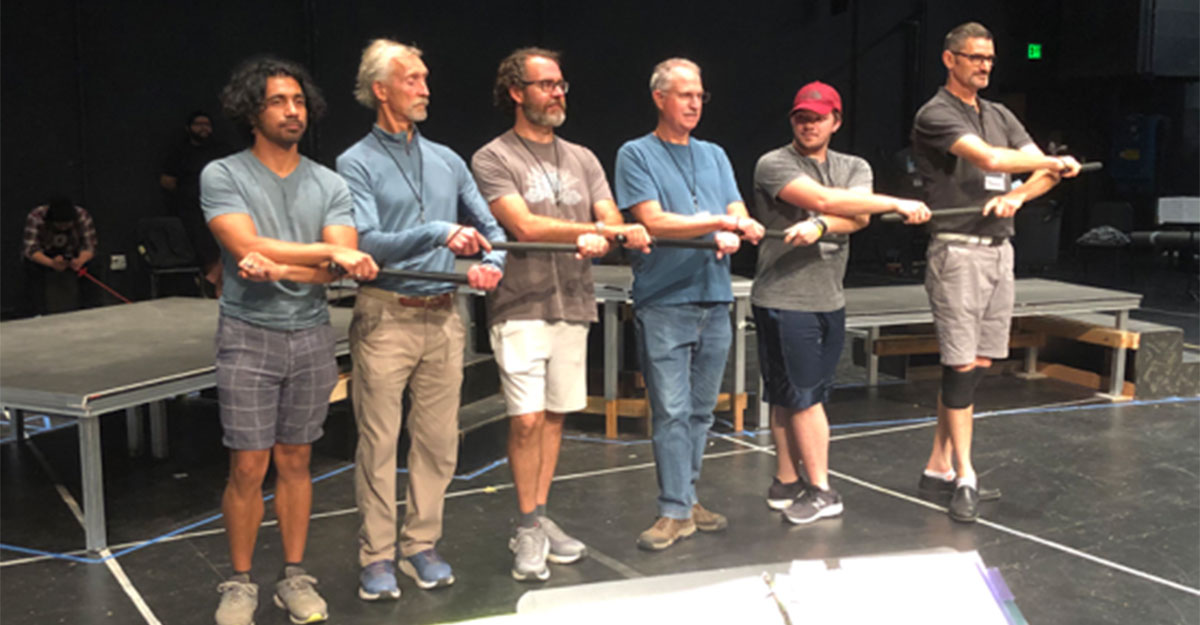 The play is a century-and-a-half old. The story—a tale of inept pirates and ill-fated lovers—is deliciously silly. Yet it’s irresistible, because it’s Gilbert and Sullivan’s Pirates of Penzance.

As Musical Director Cheryl Anderson puts it, “We are simply having a blast.”

Anderson and the rest of the Cabrillo Stage company deserve the fun they’re having getting this production ready for prime time. Last year, Cabrillo’s haunting performances of Concerning Matthew Shepherd were halted by the pandemic in March.

“We only had three performances left of when we realized we just couldn’t continue. Everybody was pretty much devastated. We’d become family. People felt like they were participating in something important,” Anderson recalls. “But we didn’t have any choice, we had to close through the rest of 2020.”

But it takes more than a pandemic to stop Anderson and her many Cabrillo-based choral groups. It was on to Zoom—“but there were lots of connectivity issues.” Then in the fall, there were rehearsals in Parking Garage A. “Only 20 people at a time, with masks and shields and standing 12 feet apart,” she explains. “But we were so happy to work together. We even did a Christmas concert outside in the amphitheater. By spring, we had it dialed. The alternative—not singing together—was unthinkable.”

Originally the summer production was to be Bernstein’s Candide.

“But we have been closed down, and there was no way we could chance a show that complicated. Everyone knows Pirates, so it seemed to be a great solution. The cast is brilliant. Many Cabrillo grads now out making names for themselves, but halted by the pandemic, returned home to shelter.” Pirates will be fully staged, “which means costumes, choreography, orchestra—all out in the amphitheater.”

Anderson has been a Gilbert and Sullivan devotée since grammar school, when she was introduced to the H.M.S. Pinafore (think Monty Python crossed with eye-rolling puns and clever music). Pirates of Penzance premiered in New York in 1879. So what’s the enduring appeal of this tale of swash-buckling pirates (not a rocket scientist among them) and semi-honest but patriotic British nobles?

“It’s really excellent music, well-crafted. The arias are challenging,” she explains. “The stories resolve themselves in the nicest possible ways. The characters fall in love, everybody ends up with something they want. I just tear up thinking about how powerful the sound and the sentiment are.”

Anderson once again has teamed up with veteran director Joseph Ribeiro to bring the uproarious stage antics to life. “I’m at all of those rehearsals. Fascinated by how other artists approach this work, the choreographer, the stage director. We’re just laughing through all the rehearsals. All of the leads have had considerable stage experience, so they are terrific,” she says.

David Graham plays Major General Stanley who performs the tongue-twisting lyrics of the show-stopper “I Am the Very Model of a Modern Major-General.” Lori Schulman sings the stratospherically high arias of Mabel, beloved of Frederic, who is played by Michael Stahl. And Melanie Olivia Camras plays Ruth, nanny to our hero Frederic and the one who mistakenly apprenticed Frederic to a band of pirates, instead of nautical pilot.

Anderson knows audiences will love what they see and hear. “The amphitheater has a great sound system. If you’re in the high bleacher seats, you might want to bring glasses,” she says. “But everybody in the cast understands how big the motions have to be.”

‘Pirates of Penzance,’ directed by Joseph Ribeiro and Cheryl Anderson opens Friday, July 30 with one show, two shows on Saturday, the 31st, and two on August 1. cabrillostage.com/piratesofpenzance.

Previous ArticleThings to do in Santa Cruz: July 28-Aug 3

Next ArticleCovid-19 Outbreak Linked to Show at Felton Music Hall