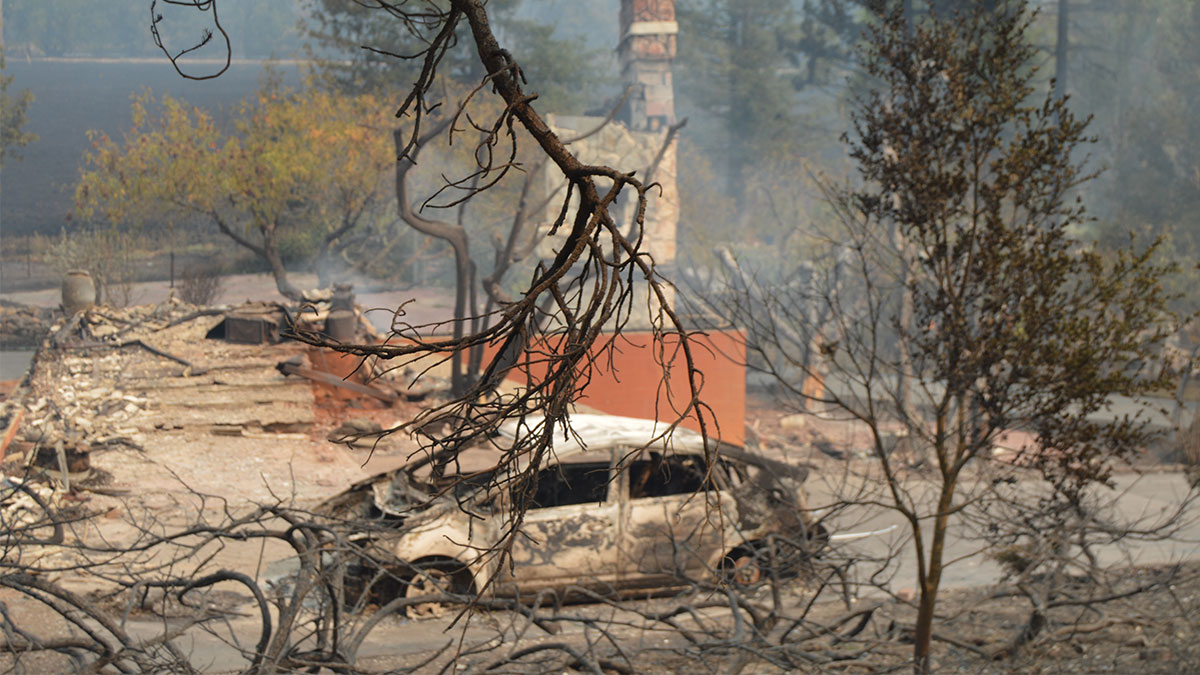 The National Weather Service estimates the winds were likely between 75 and 90 miles per hour. Given the speed, force and intensity of the fire, even an early-warning notification system—if there had been one—may not have saved many houses. It’s hard to fight a fire that’s raining down from above and moving swiftly from treetop to treetop.

But the absence of a regional early warning for Napa and Sonoma has not gone unnoticed in those counties, or around the state, where fires have continued to burn into the new year. New legislation may address that, and it isn’t hard to understand the cause for concern.

It’s no exaggeration to say that I nearly died in the Nuns Fire. At around three in the morning on Oct. 9—and without any official warning from anyone that a deadly catastrophe was unfolding—I left my home, only to be blinded by heavy smoke and swirling ash as I tried to navigate my car down Bennett Ridge.

Flames surrounded the car. There was no time for caution, only escape. Smoke blocked out pretty much everything in sight and made breathing difficult. Neighboring houses were already either fully engulfed or within moments of going up.

As the smoke cleared, the news was horrible. More than three quarters of the homes on Bennett Ridge, including mine, were lost, and one of my neighbors had died.

For hours leading up to this perilous escape, there hadn’t been a single warning from emergency officials, or from anyone. There were no blaring alarms, no police or fire sirens, no phone calls of warning. Around midnight, a car heading down the hill honked its horn, but that could have been someone tooting a farewell, after a Sunday night visit. It certainly didn’t have the ring of an urgent message announcing a dire emergency or a need to evacuate.

An early-warning system may have at least given people enough time to salvage some personal belongings. I would have liked to save the American flag given to my mother when my father, a Marine Corps war hero, was laid to rest. But there was no chance to grab family heirlooms—or even a spare pair of shoes.

The online journal Wildfire Today reported that the day before the series of fires forever changed Sonoma and Napa counties, “all cell phones in Rincon Valley east of Santa Rosa loudly blared with a message about a child abduction in San Francisco about 48 air miles to the south, but the AMBER Alert system was not used as the wildfires bore down on the densely packed communities in Sonoma County.”

Instead, local officials leaned on the Nixle and SoCo alert systems, which were inadequate to the task and wound up sending messages to fewer than 35,000 cell phone users, Wildfire Today reported, in a county of more than 500,000 people.

There may be other lessons to take from the fire, too.

Stephen J. Pyne, a fire historian and expert from Arizona State University, says the source of the fires looks to be power lines, and that global warming likely contributed to the blazes, but that we can’t lay the entire catastrophe solely at the feet of those two factors. California, he says, never learned all of its zoning and regulatory lessons from the Oakland Hills fire in 1991, although he admits there’s only so much that any new rules could do, given how many existing homes have already been built, as well as the steep cost of construction retrofits.

“It’s a social problem,” he says, “but at some point, you may just have to crack the whip.”

Since fire broke out in the North Bay this past fall, other enormous blazes have spread through California. Ventura County’s Thomas Fire, which may have also been sparked by power lines during high winds, became the largest wildfire in state history last month after less than four weeks of burning.

The Tubbs Fire, which had burned through Sonoma County months earlier and taken out more than 5,000 structures, has gone down in history as California’s most destructive.

The Nixle and SoCo emergency notification systems currently in place in the North Bay require people to opt-in or sign up in advance, which many residents didn’t know to do. Most learned of the fires from first responders banging on their doors, or through fleeing neighbors, or because their house was already on fire.

Regional elected officials announced plans this month to get the whole state on the same page when it comes to an emergency alert system. Yet-unwritten legislation would require a robust wireless alert system in all 58 counties.

The program would utilize the existing wireless-emergency alert system administered by the FCC to provide early warnings from local officials. Warnings were never issued in the North Bay fires through the so-called wireless-emergency alert (WEA) system set up by the feds. The new rules would presumably standardize and update the WEA technology and protocols to promote wider use.

One of the would-be bill’s sponsors is State Assemblymember Marc Levine (D-San Rafael). Levine’s spokeswoman Shannon Flaherty explains that WEAs are short, geographically targeted messages sent to mobile devices during emergencies. Marin County officials have been paying close attention to developments on the early-warning front, given the daunting challenge of evacuating fire-sensitive areas along the coast, where the roads are few and the fire fuel is ample.

A North Bay delegation of Levine and others aims to offer legislation requiring that every county in California adopt the most up-to-date WEA system, with trained operators who can implement an evacuation order using the system. It’s the same system already in place for other warnings, like AMBER Alerts.

The benefit of the WEA is that residents don’t have to opt-in or opt-out of it to get the geographically tailored warning. All you need is a cell phone or tablet that can receive the text-like message warning of imminent danger.

“For example,” Flaherty says, “let’s say an individual is a Los Angeles County resident, but was visiting Sonoma County during the fires. If that individual had a WEA-capable mobile device, they should have received the mobile alert regardless.”

University of Colorado professor Gregory Simon remembers the 1991 Oakland Hills fire, and lived to write a book about it.

Simon, who visited Santa Rosa last month to talk about his 2016 release Flame and Fortune in the American West, says there are big questions for what’s next in Santa Rosa’s fire-decimated Fountaingrove neighborhood, the upscale neighborhood that lost all but 60 of its homes to an October inferno.

As Santa Rosa leaders grapple with how to rebuild, the chain of accountability heads straight to the planning and development officials who approve “putting homes in places where it’s a bad idea,” Simon said.

One of the biggest dirty words in town right now is “moratorium,” says Teri Shore, regional director of the Greenbelt Alliance, who notes that Santa Rosa officials recently signed off on a new multi-unit housing project in the Fountaingrove area, two months after the fires. City and county officials are now grappling with the intersecting complexities of property owner rights and the rights of the rest of the community, not wishing to incentivize high-risk luxury developments that have a tendency to burn.

Santa Rosa could create a tax-assessment scheme so onerous that nobody would want to develop there, said Simon, who ultimately does expect the city to rebuild, just as the Oakland Hills did. But the city and county could also draw on the Australian model, which says that homeowners can build in fire-prone areas, but are responsible for putting out any fires that break out—and don’t come to the government for relief when it burns down.

“This is a chance to rethink what fire means in those communities, and to accept that urban conflagrations are now back,” he says. “It’s like measles or polio coming back. We thought we’d fixed that. But they’re back, and we’ve got to start to do the things that took the plague out of these places in the past. We need to harden our cities and redesign them.”

Next ArticleWhat’s it Like to be Black in Santa Cruz?