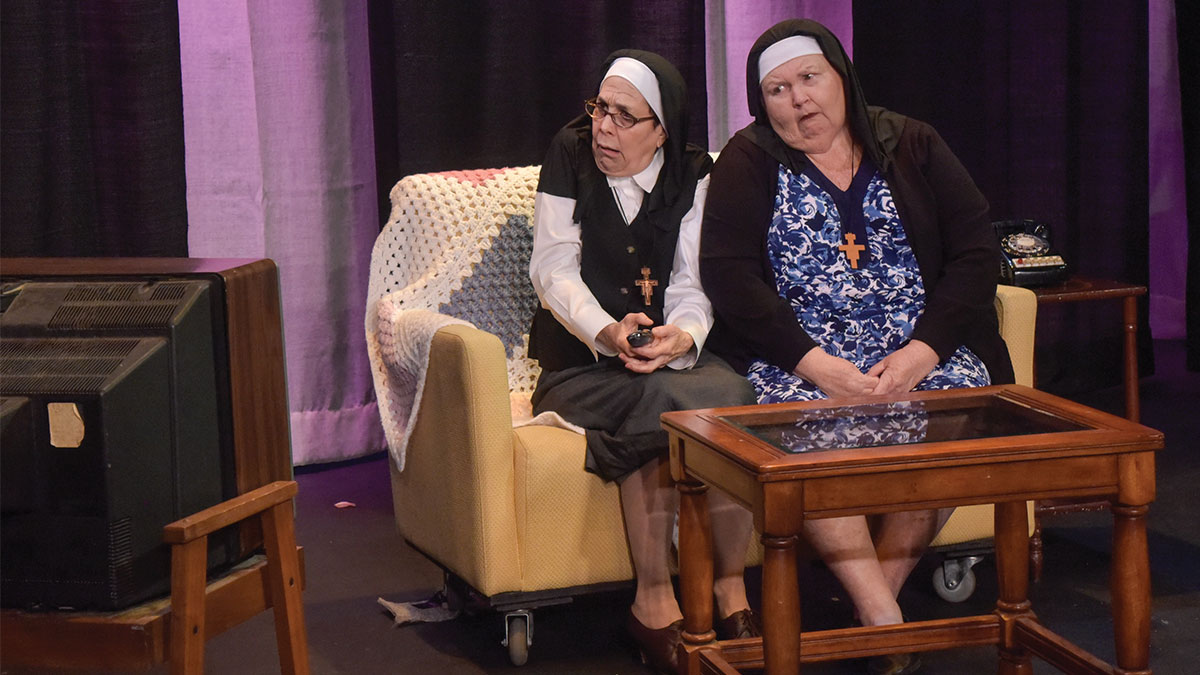 There’s a certain zeitgeist-y quality to Actors’ Theatre’s long-running 10-minute play festival 8 Tens @ 8. What makes the format appealing for both writers and audiences is that it delivers a quick sketch of the human condition rather than a full-length work’s detailed portrait, and because of that these plays are often like flypaper for the mood of the moment.

Mercifully, Donald Trump’s name is not uttered even once over the course of 16 plays and two nights in the newest edition of the festival, which runs through Feb. 4 at the Center Stage Theater. That would be too on-the-nose even for this format, though I trust the curators had to reject many such entries among the dozens of submissions they pored over. But the hopes and fears of 2018 can still be found in the subtext of nearly all of this year’s plays; it is no surprise that a vast majority of them involve their characters’ struggle to find empathy against all odds.

How successful they are in finding it can sometimes determine the success of the play—and unfortunately for those who like happy endings, some of the least effective plays are the ones that attempt to hurtle their characters head-on into understanding. Ten minutes is way too short a time for the characters to come around to a radical attitude shift the way they do in Jeffrey Strausser’s “Homecoming”—about a woman (Kye Solomon) who comes to a stranger’s doorstep seeking shelter in the middle of the night with her baby, and finds a racist curmudgeon (Tom Arns)—or Steve “Spike” Wong’s “Driving Lesson,” in which a son (Conall MacFhionn Laoich) gets into some heavy family issues while his dad (Kip Allert) teaches him to drive. The same is true for Joe Starzyk’s otherwise intriguing “After the Darkness,” about a serial killer (Donald Grube) who gets a visit from a victim’s mother (Andrea Konrad). The temptation to wrap things up nicely or deliver an emotional stinger is fraught with peril for any writer, but it can fall especially flat in a 10-minute play, when the audience is asked to quickly learn a character’s lifetime of personality and beliefs, and then expected to accept that they can flip in a couple of minutes at the end. We all know that’s not how real life works.

Far more effective are the plays that show us the moment a character’s personality and beliefs are challenged in a way they’ve never been before, and then give us only the slightest hint of how this bombshell will affect them in the future. Eileen Valentino Flaxman’s “Esther Williams Explained” is so understated that at times it’s almost still, and yet its story of a little girl (Olivia Gillanders) who shares a brief exchange with an African-American railroad man (JJ Porter) in the 1950s is powerful and loaded with implications that resonate upon later reflection. Paul Donnelly’s “The New Client,” meanwhile, is 10 minutes of furious conflict between partners Margaret (Alie Mac) and Lee-Ann (Jennifer Galvin) over whether its okay for a lesbian lawyer to defend the owners of a homophobic cake business. I won’t give away the powerful ending, but its subtlety shows how hard a 10-minute play can hit.

The same is true for Lindsey Esplin’s “Pink Roses and Apple Pie,” which measures—but doesn’t overplay—the fallout between two lovelorn sisters (Tara McMilin and Shannon Marie Kerr), and “M & The Water Man,” the only sci-fi entry among this year’s plays. In the latter, a simple water delivery by the Water Man (Michael LaMere) to M (Joyce Michaelson), whose home in the desert is set to be scorched by spiking temperatures in the future’s climate change, turns into something touching and interesting, but there’s never a false or overly “big” moment. Just a conversation, and one decision that we are on the edge of our seats waiting to get.

Sometimes the effectiveness of a piece has a lot to do with how the actors are matched to their characters. The ensemble in “Homecoming” doesn’t quite come together, but all of the actors are fantastic in other plays. Tom Arns, for instance, has an oddball delivery that doesn’t quite work for “angry racist,” but makes him perfect as the hilariously strange distributor of fortune in Mark Nutter’s “The Anonymous Donor.” Steven Capasso, as the homeless recipient of Arns’ largesse, plays off him with exactly the right level of bewilderment.

Similarly, Marcus Cato and Lillian Bogovich are the perfect match in Irene Ziegler’s “High Grass,” as Bruce and Marsha, two volunteers picking up trash together on a rural road. From a plot standpoint, almost nothing happens, but the way these two—both the characters and the actors—bring out unexpected things in each other is a joy to watch.

The highlight of the first night is Dennis Porter’s “Lost & Found,” in which Kye Solomon and Caber Russell wander into (maybe?) the wrong room in a museum, and have to decide if a mop and bucket might be a piece of art—their exploration confounded by a strange art lover (Sarah Kauffman) and a custodian (Hannah Eckstein). It’s a very funny meditation on the nature of art that doesn’t stop surprising.

Eckstein is also in the festival’s absolute surefire crowd-pleaser from night two, Karen Schamberg and Wilma Marcus Chandler’s “Phone Sets.” She and Joyce Michaelson had the audience rollicking with laughter as Sister Mary Ecstasia and Sister Mary Agnostia, two retired nuns who discover a side hustle for which they could not be more poorly prepared. Also can’t-miss from night two is Steve “Spike” Wong’s “Dragon Skin,” a brilliantly staged one-man show which will challenge your conception of what a 10-minute play can be.

Overall, artistic director Wilma Marcus Chandler and producer Bonnie Ronzio, with the help of 16 talented directors and a remarkably fast stage crew, have put together another fine collection of 10-minute plays, with the second night the slightly stronger of the two.