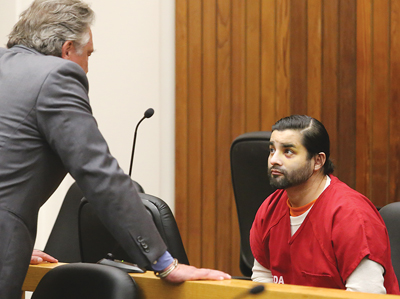 Steven Carrillo, a former U.S. Air Force staff sergeant, gunned down Patrick Underwood, a federal officer providing security for the Ronald V. Dellums Federal Building on May 29, 2020, prosecutors say. They say he also wounded a second officer in that shooting.

Carrillo’s alleged accomplice, Robert Alvin Justus, reportedly drove the van used in the attack on the federal officers. He also faces federal charges in the attack.

Carrillo is also accused of the June 6, 2020 killing of Santa Cruz County Sheriff’s Sgt. Damon Gutzwiller, and injuring three other law enforcement officials during a chaotic and violent spree in the Santa Cruz Mountains. The officers were investigating after someone saw one of Carrillo’s vans parked in a remote area of the Santa Cruz Mountains, and noted that it appeared suspicious.

He has been linked to the so-called Boogaloo Bois movement, a loosely knit group of heavily-armed, violent extremists who say they are opposed to government tyranny and police oppression.

Carrillo still faces murder charges in Santa Cruz County, in addition to several other felony charges that include carjacking and using a bomb. He is being held without bail in Santa Rita Jail in Alameda County.

Next ArticleValentine’s Day Cuisine to Warm the Heart