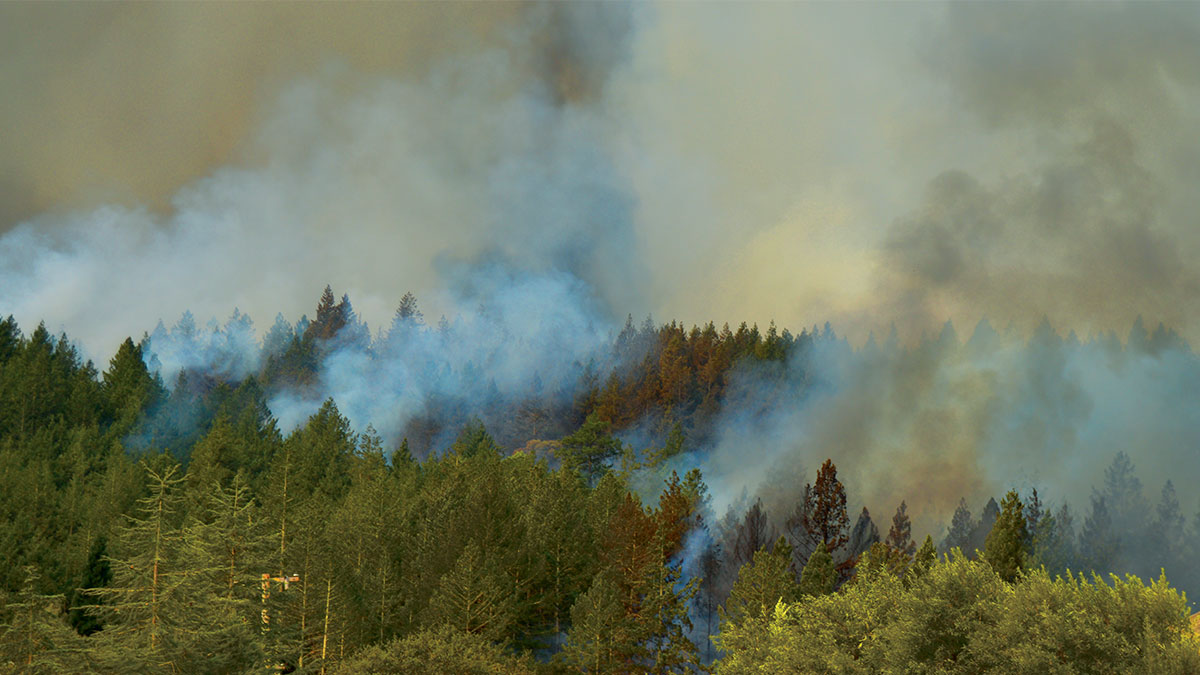 As I walked among the embers of what was the Coffey Park neighborhood in Santa Rosa Monday morning, my eyes burning from the smoke as I watched weeping residents gazing at where their homes once stood, I was shocked not only by the devastation, but by the fact that a wildfire could reach so far into the city. I thought wildfires were supposed to stay in wild lands, not move into subdivisions with busy intersections, schools and restaurants. Of course, fires don’t follow any such rules, but if this neighborhood could fall victim to a wildfire raging down the hills like a flood, what neighborhood is safe?

Indeed, Coffey Park was outside of the city’s “very severe” hazard zone. As the Los Angeles Times reported Sunday, that meant homes were exempt from regulations to make them more fire-resistant. It’s not clear how such precautions would have protected the neighborhood from the early-morning firestorm. More than 1,200 homes were incinerated in a matter of minutes.

I don’t see this as city or state negligence, but as a chilling testament to the fact that we live in a different era of fire danger. The climate has changed, and so have the risks. This is the terrifying new normal.

Sparking PG&E power lines may have pulled the trigger on last week’s catastrophic fires, but evidence shows that climate change built the weapon and aimed it right at the North Bay. And we remain under the gun.

As this issue went to press, a 125-acre blaze that started Monday night northeast of Boulder Creek in the Santa Cruz Mountains had injured five firefighters and destroyed at least four homes, and was threatening 150 more.

From the most destructive hurricane season on record to the devastating fires still burning in the North Bay, the reality is becoming devastatingly clear: the climate has changed and the conditions for fires like the ones burning in Northern California will intensify. It was just two years ago that that the Valley fire exploded in the parched hills of Lake, Napa and northern Sonoma counties, burning 76,000 acres and 1,350 homes and killing three. Northern California’s 15 concurrent fires have scorched 220,000 acres, burned an estimated 5,700 structures and caused at least 40 deaths, making them the deadliest and most destructive wildfires in California history.

“That’s the way it is with a warming climate, dry weather and reduced moisture,” said Gov. Jerry Brown in a press conference last week. “These kinds of catastrophes have happened, and they are going to continue to happen.”

Wildfires in California are a fact of life. Fire plays an important ecological role in the chaparral and conifer forest ecosystems of the North Bay. Problems arise when people choose to live in those fire-prone environments. The California Department of Forestry and Fire Protection and local fire departments mandate property owners carve out a ring of defensible space to help defend against wildfires. But there was little chance of fending off wind-whipped fires of such intensity and speed.

“We know that Northern California’s climate has changed,” says Noah Diffenbaugh, a climate scientist at Stanford University, “and we’re in a climate that’s different than when a lot of what we have on the landscape was designed and built.”

Climate plays an important role in wildfire risk, but it’s not the only influence, says Diffenbaugh. Human elements such as forest management and where and how we build also play a role, he says. Then again, climate change is the biggest human element of all.

“Climate sets the stage, and we have strong evidence that the global warming that’s already happened has increased wildfire risk in the western United States through the effects of temperature drying the landscape,” he says.

In short, climate change primed the landscape for a vicious wildfire.

Rising temperatures also lead to less snowfall in the Sierra and earlier melting of that snow, he says, meaning there is less runoff available during the hot, dry days of fall.

In California, Diffenbaugh says, low precipitation levels are twice as likely to produce drought if they coincide with warm conditions. “Overall, we’ve seen a doubling in frequency of drought in California in recent decades.”

The east-to-west Diablo winds that fanned the flames, reaching hurricane strength at higher elevations, may also be pegged to climate change, Diffenbaugh says.

Richard Heinberg, a fellow at the Post Carbon Institute, a nonprofit think tank focused on climate change and sustainability issues, lives in Santa Rosa and was evacuated the first night of the fire. His house was spared. While the links between climate change and wildfires can be indirect, he says the impacts of a warming climate on California are clear. Heinberg says research shows that increased CO2 in the atmosphere leads to rapid but less viable plant growth—more fuel for fire.

“It’s almost like we’re growing junk food with more CO2 in the atmosphere,” he says.

On a larger scale, he says data shows that California is moving into a hotter and drier climate.

“The 20th century was a wet spell for California,” he says.

City officials say Santa Rosa will rebuild and will be “better than before.” But better in what way? Better prepared for future wildfires? Better built to reduce the CO2 emissions that contributed to the perilous state we’re in? Or will better just mean bigger? While Gov. Jerry Brown admirably sounds the climate change alarm, the sentiments are not keeping pace with the explosive conditions on the ground.

In an essay on the North Bay fires called the “The Devil in Wine Country” to be published in the London Review of Books, Mike Davis, author of Ecology of Fear: Los Angeles and the Imaginations of Disaster, admits he’s “an elderly prophet of doom” as he laments “the hopelessness of rational planning in a society based on real estate capitalism.”

“We’ll continue to send sprawl into our fire-dependent ecosystems with the expectation that firefighters will risk their lives to defend each new McMansion,” he writes, “and an insurance system that spreads costs across all homeowners will promptly replace whatever is lost.”

Santa Rosa Mayor Chris Coursey says he’s thought about how the city might rebuild to be more resilient, but with the fire still blazing and people’s lives at risk, now is not the time for that. “I’m not there yet,” he told me after a press briefing at the Sonoma County Fairgrounds.

Ann Hancock, executive director of Santa Rosa’s Center for Climate Protection, says that when the time is right, she hopes the conversation centers on reducing the impacts of climate change.

“It’s not too early to start thinking about that, so long as the people who are suffering are taken care of,” she says.

As a trained public health professional, Hancock is a strong advocate for prevention: “Prevention is where we have the best opportunity for impact with the lowest cost.”

Local measures such as better forest management and more defensible space are worthy, but her organization is focusing on bringing down the greenhouse gas emissions that helped get us into this crisis.

“It is a wholesale systemic change and that’s overwhelming for most people to think about, and yet we have to,” she says.

When the North Bay rebuilds, Heinberg calls for building great resiliency into local infrastructure—redundant electric and water systems, larger inventories of food and supplies—that can better withstand future disasters. Knowing that climate change is exacerbating the risks, he says the region should deepen its investment in mass transit, zero-energy buildings and clean energy.

“Ultimately, though, what all this suggests is we need to build differently, change our patterns of living and build a lot more resilience into our whole society, because we unquestionably have more disasters on the way of different kinds, not just wildfires,” he says. “We in California have the opportunity to see the handwriting on the wall and make some changes.”

Those looking to help with relief efforts may donate to the Rebuild Sonoma Fund, which supports the nonprofits on the front lines of the Sonoma and Napa areas. For more information, visit rebuildsonomafund.org.