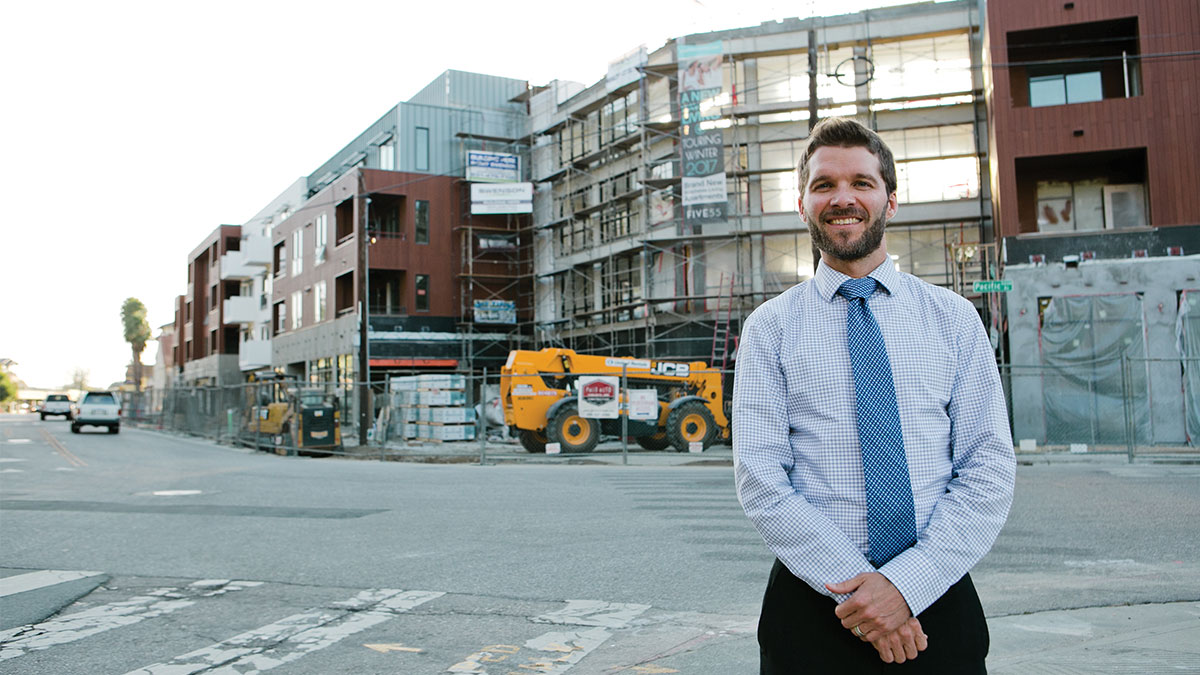 Naturalist John Muir once said that when we try to pick out anything by itself, we find it attached to everything else in the universe. He was probably talking about studying trees or glaciers, but he might as well have been talking about the affordable housing crisis in Santa Cruz.

“It’s important to understand that when we talk about affordable housing, we aren’t just talking about units built,” says Santa Cruz Housing and Community Development Manager Carol Berg. “We’re talking about parking, density, the height of buildings, what our town is going to look like in 30 years. Ultimately, it’s about our values as a town.”

The housing crisis isn’t unique to Santa Cruz. Gov. Jerry Brown recently signed a bundle of bills aimed at increasing low-income housing statewide, including one placing a $4 billion affordable-housing measure on the ballot. Even if that bond passes, the state measures will make only a small dent in California’s problem. And locally, given the pressures from university students living in town, the proximity of Silicon Valley and the increasing number of units being rented to overnight tourists, even working professionals struggle to find housing.

Similar struggles are unfolding around the country.

“Everyone who lives in a desirable location is fighting the same battle,” says Todd Brown, a town councilmember for Telluride, Colorado, a high-end resort town with a median household income similar to Santa Cruz. “We’re all trying to maintain a thriving local community in the midst of skyrocketing housing and land costs.”

In Telluride, city leaders have been working for two decades to make sure everyone from dishwashers to teachers to mid-level shop managers can afford to live there. Fifty percent of the town’s workforce lives in deed-restricted affordable housing. “But it’s nowhere near enough,” Brown says.

Efforts to provide affordable housing in Santa Cruz go back to the 1979 passage of Measure O, an ordinance that called for 15 percent of all units built in the city to be made available for low- and moderate-income residents. Thirty-seven years later, only 7 percent of our housing stock is deed-restricted. And the City Council is poised to cut the current requirement in half.

When housing construction slowed, the city began allowing developers to opt out of actually building the less profitable lower-income units, hoping to encourage the creation of more housing. Developers were allowed to pay an in-lieu fee, and funds went into an Affordable Housing Trust Fund.

How much money has the city collected from in-lieu fees? How many affordable units were built with contributions from the Affordable Housing Trust Fund? No one at Santa Cruz City Hall seems to know the answers to these questions.

The city hired financial consultant Kathe Head, of Keyser Marston Associates, to help them get a grip on the issue. She concluded that requiring builders to make 15 percent of their units affordable would result in no new construction. “She told us it wasn’t financially feasible,” says Berg. “It just won’t pencil out for a developer.”

According to local affordable housing advocate Sibley Simon, investors want to see a 20 percent return in order for a project to “pencil out.”

“Development is really risky and expensive here in California,” Simon explains. “Hundreds of thousands of dollars are sunk into projects that never get built.”

Currently, Simon sees mostly high-end housing getting built in Santa Cruz, with a few affordable units. In an effort to provide housing for the vast population in between, he’s approached foundations and nonprofits for funding for new projects. “These groups are willing to accept lower returns, like 5 or 6 percent, in exchange for having a positive social impact,” says Simon, who’s working on building a complex of small units near the Homeless Services Center.

Meanwhile, the Santa Cruz City Council is considering dropping its affordability requirement from 15 percent down to 7.5 percent, in an effort to appeal to developers and spur new housing construction.

In the coming months, the council will also be hearing a plan to rezone Lower Pacific Avenue for up to six floors. Lee Butler, the city’s new director of Planning and Community Development says current height restrictions were a “roadblock” for developers.

With few vacant sites left in the city, finding a place to locate any new units poses a significant challenge. “The city is pretty much built out, so infill housing is the way we need to develop in the future,” says Berg. Infill could involve subdividing large lots with one unit into multiple lots with single-family homes, building taller high-density developments or allowing mixed-use developments. But every time a developer is allowed to opt out of actually building affordable units, there’s less available land where any low-income housing can be built in the future.

Many city leaders fear imposing conditions that might make developers walk away from the table. “What if we pass something really well-intentioned, and it results in developers not being able to build anything?” asks City Councilmember Richelle Noroyan.

Butler insists that market realities guide Santa Cruz’s development. “We need to consider the market implications of whatever program we put forth,” he says.

Every town has to take market forces into account, but not every town lets developers dictate the terms. In Telluride, for example, city leaders’ commitment to building affordable housing is stronger than their allegiance to the free market.

The city of Telluride, with just 3,000 residents, actually hires contractors to build affordable housing. Less than six months ago, they completed an eight-unit project in town. Right now, the city has 18 more apartments under construction, three tiny homes and an experimental 44-bunk rooming house that can be converted back to apartments if the effort doesn’t pan out as planned.

In Santa Cruz, a town with 60,000 residents, there are currently six affordable housing units under construction. Two are being built with assistance from Habitat for Humanity, and another two are accessory dwelling or in-law units.

In Colorado, sales tax is only 2.9 percent, compared to 7.25 percent in California. The town of Telluride has chosen to take on some of the financial burden of providing workforce housing themselves.

Some of the funding for Telluride’s projects comes from a 1 percent sales tax devoted to affordable housing. Some of it comes from fees. In Telluride, any development project, including a single-family home or significant reconstruction, must pay fees to the town’s affordable housing fund. While the calculation for in-lieu fees is complex in Santa Cruz, in Telluride it’s a simple formula involving percentages and square feet.

When the proposed project is larger than about 3,800 square feet, the developer can no longer opt out of building affordable units by paying a fee. They need to build an affordable unit, either on-site or at another location within the city limits. Or, the developer can purchase a free market unit and hand it over to the housing authority as a deed-restricted unit. Developers have a variety of options, but every time a large project gets built in Telluride, the town gets more affordable housing.

“When developers say ‘that won’t pencil out,’ we say ‘that’s your problem,’” says Brown. “We know there’s always another developer in line behind them.”