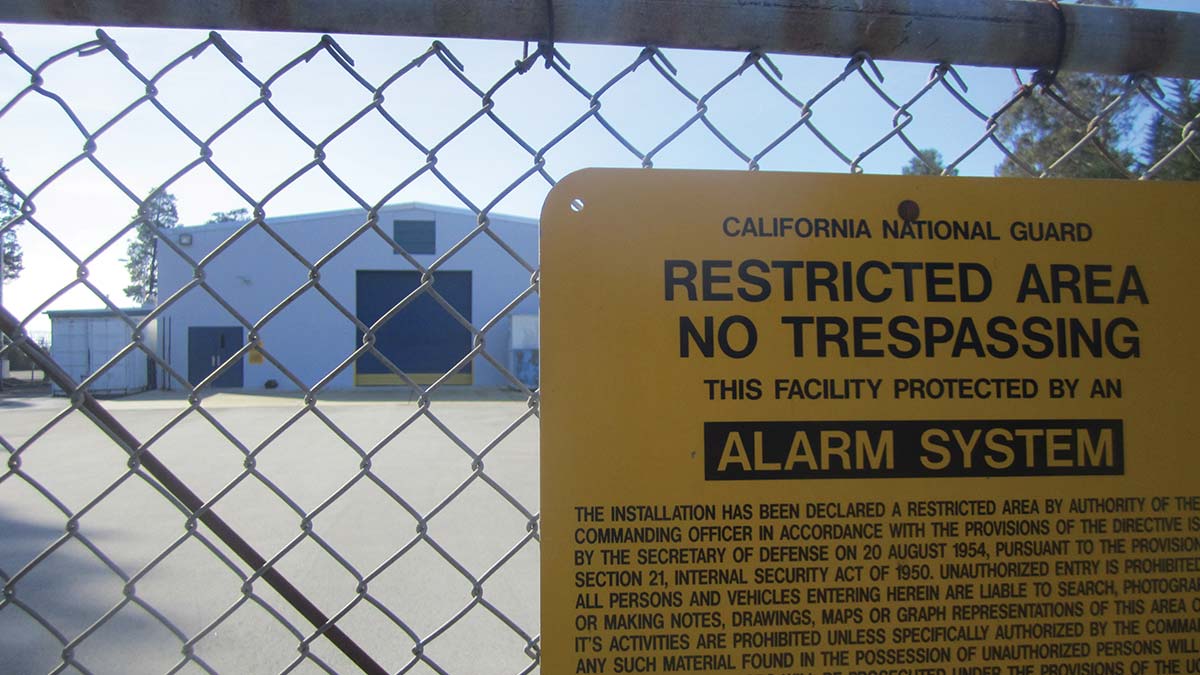 It’s 4 p.m. on a cold winter day, and two dozen people have huddled up in front of a brightly lit cafeteria. Within a half an hour, the line has nearly doubled at the Homeless Services Center (HSC) as men and women of all ages gather to eat a warm meal of polenta and kielbasa sausage with veggies in a flavorful sauce. After dinner, a 24-passenger bus pulls onto the campus, ready to shuttle individuals to the National Guard Armory hangar in DeLaveaga Park.
Upon arrival, guests are given a last chance to turn over any banned paraphernalia—drugs, alcohol or weapons—they might have previously forgotten into an “amnesty box.” They are then wanded by a metal detector, as their bodies and bags are searched for contraband.
As HSC staff checks people in, several volunteers lay out sleeping mats in men’s, women’s and couple’s sections.

The Armory has not hit full capacity this season and only reached a peak of 91 people during a coldsnap between Christmas and New Year’s. The numbers are surprising, considering at last count a year ago, there were 1,964 homeless people in the county, 69 percent of them unsheltered.

A number of people immediately lay out their belongings, trying to fall asleep quickly, while others walk toward the television and DVD player set up in the middle of the room or head toward the bathroom. Conversations bounce off the wooden floor throughout the hollow room as staff members listen to guests’ needs and pass out hygienic supplies.
“It’s really helpful [running the shelter] when you have a dedicated, compassionate staff,” explains Winter Shelter Program Manager Jordan Boyer. “Detail-oriented people are exactly what we need.”
By 5 a.m. the next morning, 85 individuals will wake up, gather their life belongings and take the shuttle back to the HSC campus, where coffee and a warm breakfast waits.
Since Nov. 16,  this is how the Winter Shelter has operated every day, taking in an average of 80 individuals a night for 100 possible spaces.
The Armory has not hit full capacity this season and only reached a peak of 91 people during a coldsnap between Christmas and New Year’s. The numbers are surprising, considering at last count a year ago, there were 1,964 homeless people in the county, 69 percent of them unsheltered. Also, the city’s camping ban, which allows police officers to cite people for sleeping outside at night, does not go into effect on any nights the winter shelter is full.
The Santa Cruz City Council had voted in October to pay $31,000 to help keep the shelter open for the wet El Niño year, with other local jurisdictions also chipping in as well.
Mayor Cynthia Mathews, in an interview with GT last month, used the extra spots in the winter shelter as a reason she was hesitant to support a separate Warming Center program, an emergency shelter started by activists for near-freezing nights.
Phil Kramer, HSC’s interim director, and shelter clients say there could be a number of reasons the winter shelter still has spaces.
Many in the homeless community have a hard time making the 5:30 p.m. bus call, often because of work. Other people decline using the Armory because the National Guard doesn’t allow pets or because there isn’t enough space on the shuttle for additional bags, Kramer says. Some people might not even want the help, or they might not feel comfortable in the shelter.
“Some of the people that refuse the services are a bit rougher to handle,” says Andy Carcello, a 59 year-old HSC resident and cafeteria volunteer. “They possibly have more problems and become more isolated.”
Supporters say the volunteer-run Warming Center Program (WCP) has been covering some of those needs in the homeless community.
The program goes into effect after consecutive days of rain or if the temperature drops below 34 degrees. The Warming Center sets up their “Soup and Shuttle” station in downtown Santa Cruz’s Pearl Alley, serving hot soup and decaffeinated coffee to individuals before shuttling them to one of three sleeping locations. Last month, the City Council voted to donate the use of a city building to the WCP as a “last resort” if other locations are filled.
WCP manager Brent Adams called the decision “huge,” and Kramer says the Warming Center is indeed filling a special niche of its own.
“The Warming Center really accommodates many people we can’t,” he says.

The past year was a tumultuous one for the HSC, and not just because it lost approximately $650,000 in funding, including the $350,000 Emergency Services Grant—which funded showers, meals and mail service. The center faced uncertainty at the top with the resignation, after only one year, of director Jannan Thomas.
The Homeless Services Center has also been getting complaints from community members about people loitering outside the campus. Because it is a closed campus, Armory guests have nowhere to go after breakfast, leaving many to congregate in front of the gate until the shower service opens at 10 a.m.
“There’s no getting around the uncomfortableness of asking people to leave the street,” says Kramer, who took over as interim director last fall. “But as a good neighbor, we are trying to address the needs of the community.”
Through community donations, the nonprofit raised $200,000 to keep the Paul Lee Loft open through this June, when HSC’s fiscal year ends.
Kramer also reports that “Hygiene Bay” has re-opened from 10 a.m. to 2 p.m. every day, thanks to the time and work of a few volunteers. The Center continues to serve four meals a day—two breakfasts and two dinners—but only for individuals living on HSC’s campus or enrolled in that day’s winter shelter. Additionally, the Santa Cruz County Board of Supervisors voted last summer to give an additional $66,000 to keep the mail room open for HSC residents.
HSC officials are aware they can’t celebrate yet. The Paul Lee Loft and mailroom are funded only through June, when they will re-apply for federal funding, leaving a funding gap until at least fall.
Kramer blames the uncertainty on ever-changing federal grant guidelines, which have not been released for the upcoming cycle, as well as the feds’ increased tunnel vision for housing people on the streets.
“The indication from the federal government is that they are focused on funding housing, which is great,” Kramer says. “But it’s at the expense of these essential human needs: eat, sleep, go to the bathroom, etc.”