.Could Scotts Valley be Reunified? 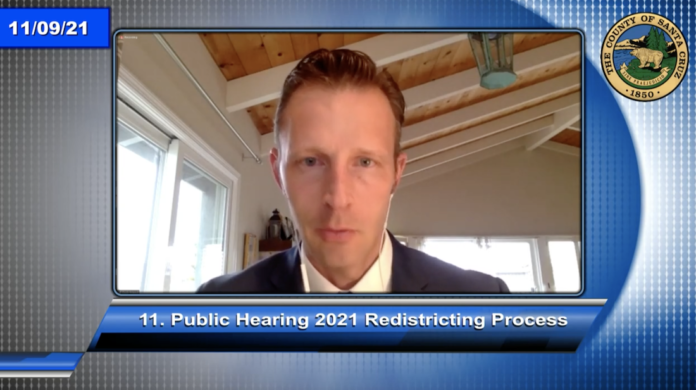 A decade after Scotts Valley was split in two by redistricting, that city could be “reunified” under a proposal introduced to the Santa Cruz County Board of Supervisors Tuesday.

The proposal is among several recommendations the board is considering as the county redraws its supervisorial boundaries during its decennial redistricting process.

During redistricting, jurisdictions use the recent census to see how their populations have grown over the past 10 years, and then redraw the supervisors’ boundary lines to make the populations equal in each district. County officials are looking to make changes to the five districts to evenly distribute its population of 271,350.

The maps originally presented to the supervisors did so by placing 54,270 residents in each district. The maps suggested moving 491 people in Watsonville’s Apple Hill District from the 2nd to the 4th District, and 613 people from the 3rd to the 1st District in the area of Brommer Street and East Harbor.

But those maps could change under the proposal to reunify Scotts Valley, which was suggested by Scotts Valley Mayor Derek Timm and forwarded by 2nd District Supervisor Zach Friend. The latter said the move would meet redistricting guidelines of keeping “communities of interest” intact.

“I think that from a populational standpoint it makes sense,” Friend said.

If approved, the shift in Scotts Valley would move about 2,300 people from the 1st to the 5th District, said Assistant County Administrator Elissa Benson.

Timm’s proposal also moves a small wedge of Midtown Santa Cruz into the 1st District from the 3rd.

Timm says that the last redistricting process split Scotts Valley along Highway 1, and came despite outcry from its citizens. He says the move has been perplexing for the small city, which suddenly had lines drawn through its police and fire department boundaries, as well as its water and school districts.

“One of the missions of redistricting is to keep communities of interest together,” he said. “If you’re going to try to achieve the purpose of redistricting, the experiment around chopping Scotts Valley up hasn’t served any purpose.”

The shift also left Scotts Valley with two separate supervisors, Timm said, despite its small size. The importance of having just one became apparent, he says, during last year’s CZU Lightning Complex fires when the city became a staging area for emergency crews battling the blaze.

“Splitting a portion of our residents from the 5th District only serves to dilute our ability to select a Supervisor to represent our community,” Timm said.

Supervisor Manu Koenig, whose district includes half of Scotts Valley, says reunification was one of the biggest issues he heard during his campaign, and agrees with the proposal.

Under state law, jurisdictions when redistricting must hold at least four public hearings, and give residents an opportunity to weigh in. In addition, any draft maps must be made public seven days before they are brought to the Board of Supervisors for adoption. The meetings must be public and must be recorded.