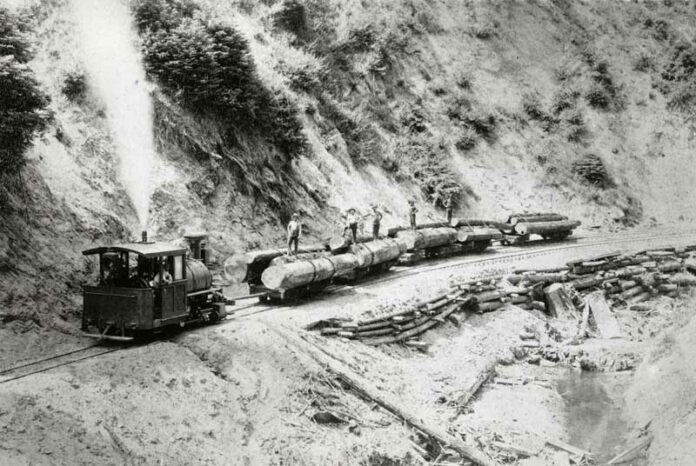 It was a moment of sheer luck that historian and author Derek R. Whaley, while doing research for his own book, discovered the work of the late Ronald G. Powell.

Whaley owns local publishing company Zayante Publishing and is the author of the Santa Cruz Trains series, which documents the rise and fall of the railroading industry in Santa Cruz County. He’d been having a difficult time finding history of the Loma Prieta Branch that ran from Aptos through the Forest of Nisene Marks. So, he reached out to UC Santa Cruz Librarian Emeritus Stanley D. Stevens, who sent over a large PDF containing one of Powell’s manuscripts.

“I was like, ‘What is this thing?’” Whaley said. “Powell was so incredibly thorough, so detailed. I was like, ‘This is crazy!’ And I immediately asked Stanley for more.”

“The Reign of the Lumber Barons” chronicles the golden age of the lumber industry in the hills above Aptos and Corralitos at the end of the 19th century. Through first-hand accounts, newspaper clippings, and more, the text examines how tens of thousands of old-growth trees were systematically harvested to use in the development of the Bay Area, starting in the 1860s.

Powell, a historian and author himself, was often found in the UCSC library in the 1980s and ‘90s, poring over maps and texts, compiling histories as he went. The manuscript was intended to be part of Powell’s history series about Martina Castro’s Rancho Soquel Augmentation, a Mexican land grant given in 1833 that covers present-day Santa Cruz County.

Whaley, who in 2014 had just moved to New Zealand to work on his PhD in Late Medieval French Chronicles, saw an opportunity to preserve Powell’s work and do research for his own book.

“What Powell wrote was a chronicle, which is what I’d been working on for the past four years for my thesis,” Whaley explained. “And here’s a guy who did it 30 years ago, about Santa Cruz history.”

Whaley published the first of Powell’s manuscripts as “The Tragedy of Martina Castro” last year, focused primarily on mid-county history. “The Reign of the Lumber Barons” uncovers stories of people living in the logging towns in places such as Loma Prieta and Valencia, pulling in history from Aptos, Corralitos and parts of Watsonville.