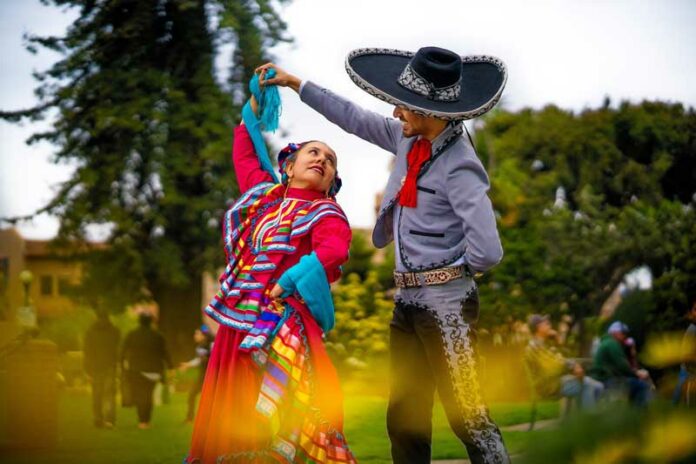 Four decades ago, Janet Johns came to Watsonville as a new teacher, hoping to start a dance company with her former roommate from San Jose State, Frances Urbina.

It wasn’t long before Johns’ fellow teachers in the Pajaro Valley Unified School District expressed interest in learning how to teach traditional Mexican dances. Johns and Urbina began teaching through an after school program at Hall District Elementary.

“Then we were like, ‘Why don’t we also perform?’” recalled Johns. “Make this a real group.”

Esperanza de Valle (EDV), as it is now called, received a grant from the Arts Council Santa Cruz County in 1980. With the funds, the folklórico group started purchasing outfits and planning for its first show.

Over the past 40 years, the group has increased in numbers and influence. It is entirely run by volunteers, who also raise funds to pay for outfits, travel and bring in more instructors. In 1996, they received a grant from the Rockefeller Foundation, which allowed them to take a team of dancers to work with dance communities in Veracruz, Mexico.

“That was amazing,” said Johns, who is now the group’s artistic director along with assistant director Ruby Vasquez. “They chose one group from New York City, one from Mexico City … and us, in Watsonville.”

This weekend, EDV will celebrate its 40th Anniversary with two special performances. The Cabrillo College Dance Department, where Johns currently teaches, will present the show at the Crocker Theater in Aptos on Saturday and Sunday, highlighting four decades of Esperanza’s artistic programming in Santa Cruz County.

Johns began dancing at San Jose State, where she met master instructors from Mexico, some of whom would return to teach EDV students. Many of the group’s signature danzas, sones and huapangos were choreographed and taught by the masters.

“My first master … learning from him, that’s where I really discovered the importance of working with masters to keep things authentic,” Johns said. “Everything we learned was due to bringing in masters of these traditions, or we have traveled to meet them ourselves.”

This is why the troupe has decided to dedicate its 40th celebration to these instructors, Johns said.

“We really want to dedicate this show to them,” she said. “Two of whom we lost last year during Covid. They passed within months of each other; it was devastating. They taught us so much.”

The show will feature music, dance and storytelling from various regions and states of Mexico, including an original choreo-drama, “Los Dos Hermanos” which fuses dance and drama through traditional and cultural themes, directed by Eduardo Robledo. Cuatro Con Tres will provide live music.

Johns said that Covid closures were difficult on the group. They Zoomed every week, and member Alex Santana compiled a series of videos of the dancers performing at home. Once things began opening up, they filmed outdoor projects at Santana’s home with other organizations such as the Watsonville Film Festival.

“We were just waiting for when we could get back into a dance studio,” she said. “Now we’re finally back together, learning and creating these beautiful dances. We’re all masked … which is a different way to dance, but at least we’ll be wearing our beautiful outfits.”

EDV is continuing its 40th anniversary celebration into 2022, working with the city of Watsonville to hopefully hold an outdoor performance at the plaza.

“We’re just looking forward to dancing together again for everyone,” Johns said.

“Celebrando 40 Años de Esperanza” will be held at the Crocker Theater, 6500 Soquel Dr. (lower campus), Saturday at 8pm and Sunday at 3pm. Tickets are $20 for general admission, $16 for seniors, $10 for students and $10 for children. Click here for information.