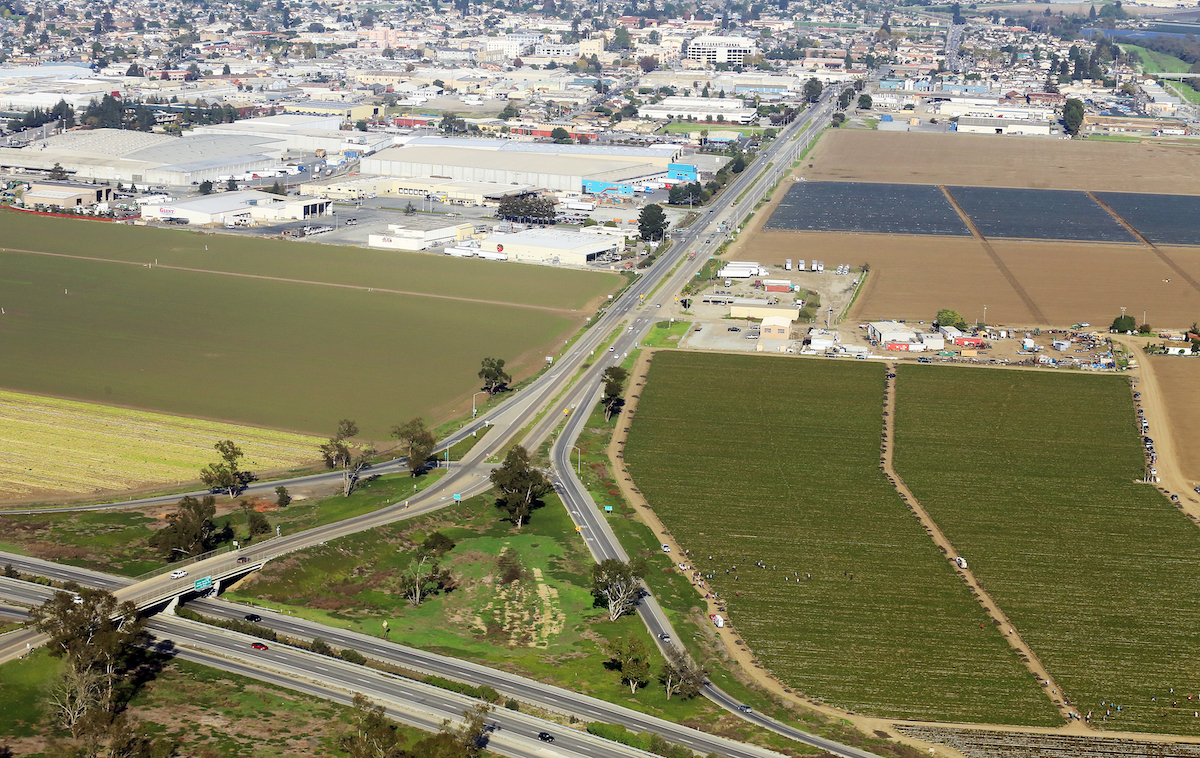 Should Watsonville expand outward in an effort to meet mounting housing and economic needs? Or will it continue to restrict its growth, and increase its housing density in favor of protecting every inch of the rich surrounding agricultural land?

These are the questions Watsonville voters will have to answer come November.

The Watsonville City Council at its Tuesday meeting placed the extension of Measure U, a landmark ballot measure approved by voters in 2002, on the Nov. 8 election.

In doing so, the elected leaders will give the city’s voters an opportunity to determine if the restrictions on where, when and how the city could expand have had a positive impact on the community over the last 20 years.

A report presented to the city council on Tuesday painted a largely negative picture of the measure’s effect on everyday life, stating that, among other things, it has hamstrung the city’s economic growth and will likely make state-mandated housing goals all but impossible to achieve if it is renewed through 2040.

But the Committee for Planned Growth and Farmland Protection—the group spearheaded by environmentalist and agricultural representatives that gathered some 2,400 signatures to bring the item to the council—in a letter to the City filed by their attorney says that the report is flawed, illegal and one-sided.

They say that it only focuses on the negatives of the measure, and omits or understates several housing initiatives and documents that lay out a way for Watsonville to meet its state-mandated goals through infill development.

“I don’t think there’s any indication that this presentation, which simply provided facts, was unbiased,” Zutler said.

The council had three choices at Tuesday’s meeting: accept the extension of the measure as a city ordinance, place it on the upcoming June primary or send it to voters in November.

Several city council members said they supported placing it on the November ballot because it would give the committee and City time to meet and resume talks that have stalled for various reasons over the last three years.

Measure U is an amendment to the City’s general plan that established a so-called “urban limit line” that nixed any development of agricultural land surrounding the city—save for a few exceptions.

Its roots can be traced back to ugly annexation battles for properties west of Highway 1 in the 1990s that pitted Watsonville against environmentalists, farmers and other county jurisdictions and agencies. As it is today, the city was in the midst of housing affordability and unemployment crises after roughly 3,000 jobs, mostly middle-class gigs in the canning industry, were shipped out of the country as a result of the North American Free Trade Agreement’s implementation in 1994. Trying to spark economic growth, the City sought to expand its footprint in the hopes of luring other large employers to replace the blue-collared professions that had fled.

But county officials scrapped those plans because they believed Watsonville’s expansion would negatively impact the agricultural industry, which serves as a major revenue and job generator for the area.

From that defeat, however, arose Action Pajaro Valley, a nonprofit that brought together the community to help create a long-term plan of how Watsonville would grow and meet the challenges the city then faced.

The end result was Measure U, and in 2002 Watsonville voters approved it with 60% of the vote.

Watsonville would give up most of its annexation plans to the east and west, and would instead focus its efforts to the north in the Buena Vista area. In addition, the City would also develop the Manabe-Ow property (then Manabe-Burgstrom) for industrial use, provide more senior housing on the southeast side of the city and eventually annex property off Atkinson Lane to build needed affordable housing.

The first round of protections baked into the measure expire in November and the rest will phase out in 2027.

Much of Measure U’s planned growth has not been realized, according to the report from consultant Economic & Planning Systems presented Tuesday.

Development in the growth areas included in Measure U has yielded just 207 housing units, the report stated.

In addition, the Manabe-Ow property has only fulfilled about 194,000 square feet of commercial development (the FedEx distribution center), compared to the 1 million square feet proposed in the area’s specific plan. On top of that, the job creation projected in Measure U has also lagged—only about 200 of the 2,390 employment opportunities have been realized, according to the report.

But the committee says that those shortcomings are not the direct result of Measure U. They say the failure to develop those areas falls on the shoulders of the City and is more directly connected to litigation against the municipality brought forth by special interests such as environmentalists, agriculture and the local pilots’ association.

The committee also says the City is misrepresenting the number of potential sites within city limits that can be redeveloped into housing. It cites numbers in the City’s 2015-2023 Housing Element that state the municipality has 201 sites, or roughly 105 acres, that are either vacant or “underutilized.”

In addition, the committee says that the passing of recent state housing laws that allow single-family homes to be upzoned into four-plex properties will help the city meet its increasing mandates. The City’s Downtown Specific Plan that is expected to be approved in the coming months will also open up more sites for residential development, the committee says.

During public comment, one person from the committee suggested the City should invoke eminent domain to take over vacant sites in which property owners have not pursued redevelopment.

But the report presented Tuesday included an analysis of the properties identified in the housing element that found that there are now 147 vacant properties within the urban limit line. Of those properties, 40 would not face significant challenges—such as airport safety zones, existing entitlements and proximity to wetlands—that prohibit residential development. And only 10 are currently ready to be redeveloped into housing without a zoning change or additional analysis.

Those 40 parcels, according to the report, would produce just 281 housing units.

Projections from the upcoming Regional Housing Needs Allocation (RHNA) determined by the Association of Monterey Bay Area Governments show that Watsonville will likely need to approve some 2,100 housing units over the next eight years—that’s on top of the 300 or so units that it will carry over from its current RHNA allocation. As such, Measure U’s extension, the report states, would create a “significant barrier” to meet housing goals.

The report also took a look ahead to see what sites near the urban limit line would make sense to redevelop should voters rebuke the extension in November, and all protections end in 2027.

For residential development, the study identified 77 acres adjacent to Wagner and East Lake avenues as a “strategic growth” area that could produce around 860 housing units.

For commercial development, the historic 13.6-acre Redman House parcel across the street from the new Hampton Inn & Suites hotel would likely “have a strong positive impact on the City’s General Fund” if turned into a business complex with shopping, dining and lodging, the report found.

There was little discussion from the council on the item, though some councilmembers referenced Watsonville’s limited developable space throughout the night during staff presentations on the City’s housing element and park fees.

About a dozen people spoke during public comment, all of them in favor of extending the measure. This included a handful of members of the Watsonville Wetlands Watch’s Board of Directors and Santa Cruz County Farm Bureau President Arnett Young.

All of them said that the extension of the measure would mean the preservation of the Pajaro Valley’s role as an agricultural power and halt urban sprawl.

Committee member Sam Earnshaw in an email following the meeting said that he was disappointed that the City’s presentation was tilted toward the negative impacts of the measure. He also said that he felt the city council did not acknowledge the committee’s 32-page impact report it prepared for the elected leaders.

That report highlighted the positive impact Measure U has had on agriculture preservation and infill development but did not address its impact on the issues that the city faces, including rising housing costs and increased demand for services needed to help low-income residents that make up a bulk of the jobs in the agriculture industry.

The report also largely shrugged off the costs and difficulties associated with rezoning and redeveloping sites that have set back several housing projects in Watsonville, including at least three large developments that are either in litigation or facing environmental challenges.

Councilman Lowell Hurst, who was previously on the council around the same time as the inception of Measure U, said that much of Tuesday’s conversation ran parallel to the conversations from the 1990s during the previous annexation battles.

“I feel like I’m having a Déjà vu moment, back into the time,” he said. “We’ve had these discussions previously, and I think we’re going to have more discussions because there are a lot of things that are ambiguous and maybe misunderstood about the constraints on the City. Hopefully, those will come out in some dialogue and we need more time for that dialogue.”

Next ArticleVoters Will Determine Future of County’s Rail Line