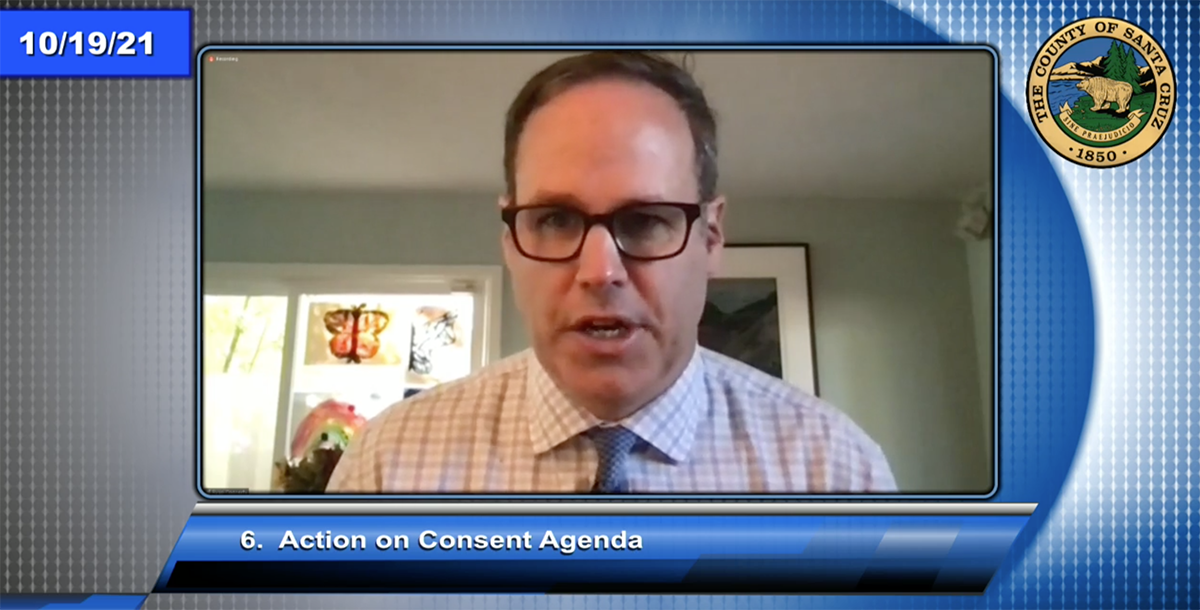 After a significant portion of the Bonny Doon community mobilized to try to keep a man who raped a 21-year-old woman in the 1980s from moving to town, Santa Cruz County is now seeking changes to California law, so it can have additional tools to protect locals.

While “sexually violent predator” Michael Cheek’s placement hearing (originally scheduled for Oct. 14) was delayed by a month, Third District Supervisor Ryan Coonerty introduced a Board of Supervisors measure Tuesday to pressure the State to give local governments more control over where these offenders can live. It was approved unanimously.

Through the initiative, the Board directed County Administrative Officer Carlos Palacios to send a letter to the Department of State Hospitals asking Sacramento to declare Santa Cruz County “off-limits” for Sexually Violent Predator placements until the sex criminal-home hunting program is amended.

It also directed staff to take “all necessary actions to oppose any further placements of Sexually Violent Predators in Santa Cruz County” until California Welfare and Institutions Code 6608 “has been amended to allow a local jurisdiction full participation in the release and placement process, including full veto authority.”

And supervisors directed Chair Bruce McPherson to send a letter to state representatives expressing the County’s concern with that law.

The Santa Cruz County officials say they want their reps to take a leadership role in amending it “to allow a local jurisdiction full participation in the release and placement process, including full veto authority.”

In his item, Coonerty explained that the California Welfare and Institutions Code currently allows Sexually Violent Predators to move into communities “with no process for input or evaluation by local agencies.”

The “sexually violent predator” designation is applied to criminals who’ve been convicted of a “sexually violent offense” and have a diagnosed mental disorder that makes them likely to engage in predatory sexual behavior in the future.

Liberty Healthcare has sought to place Cheek at a residence in the Santa Cruz Mountains along Wild Iris Lane. Area residents argue that putting a convicted sex predator in a place like that is a terrible idea, since it can take upwards of half an hour for Sheriff’s Office officials to respond to emergencies, and poor telecommunications coverage means electronic monitoring might not work properly.

“Liberty promotes SVP placements that are terribly inappropriate, like the one to put Michael Cheek in Bonny Doon,” Bonny Doon Union Elementary School District Board President Michael Geluardi said at the meeting. “Amending the SVP law to increase local participation is a solution, and counties must lead the fight.”

San Diego County is already making this case with the State, he added.

“Your action also sets the tone for vigorous opposition should Liberty propose another site for Mr. Cheek somewhere else in our county, as is likely,” he said. “And follow up by encouraging your State representatives to support a legislative solution to an out-of-control corporation who would destroy family neighborhoods in Santa Cruz for profit.”

Cheek’s next hearing has been set for Nov. 15.

Previous ArticleThings To Do in Santa Cruz: Oct. 20-26

Next ArticleDo Americans Really Need Boosters? CDC Panel Is Wrestling With the Data