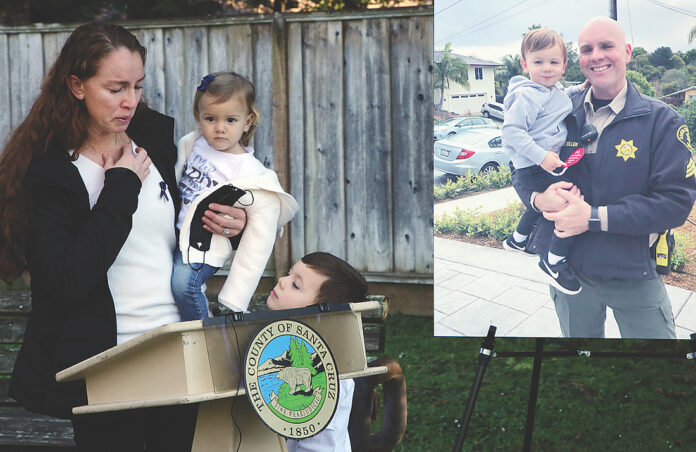 Plans were announced Thursday of a major renovation of Willowbrook County Park to honor the late Santa Cruz County Sheriff’s Sgt. Damon Gutzwiller, who was gunned down in the line of duty in 2020.

The blueprints include a memorial bench surrounded by more than 1,000 bricks citizens can personalize with their own words, an “Eternal Flag,” a picnic area, granite boulders and ornamental landscaping and metal footprints of the late deputy’s family set permanently in the ground. The project will also rebuild an 80-foot bridge that spans a small creek.

“Willowbrook Park holds a lot of special memories for me,” said Faviola Del Real, Gutzwiller’s partner at the time of his murder. “We used to walk our dogs here and play tennis. Making this dedication in honor of Damon will give our children, Carter and Lucia, along with future generations a place to honor his sacrifice and remember his legacy. I know that Damon would have loved to be honored at Willowbrook Park.”

“The bridge is very important because it will connect the memorial area, where people can relax and reflect, to the new play area where kids can go and play,” she said. “The park will also include wheelchair access.”

On June 6, 2020, Sgt. Gutzwiller was shot and killed in Ben Lomond by Steven Carrillo, a member of an extremist group named the Boogaloo Boys. A trial setting is still in the works, with his next court appearance slated for April 4 in Santa Cruz Superior Court.

“This is a great project. It is a place where we all can come visit, and I know this place was special for Damon,” Sheriff Jim Hart said. “It’s important that we get this project done.”

Gutzwiller, who joined the Sheriff’s office in 2006, grew up in Santa Cruz County, owned his first home in the  Willowbrook neighborhood and frequented Willowbrook County Park.

“This memorial will ensure Damon’s sacrifice is never forgotten and provide a beautiful new reflection space at the park along with improvements that will benefit the community for years to come,” Friend said. “Damon and his family have paid the ultimate price on behalf of the community, and this will be a fitting memorial for his service.”

Friend said that he has been working on the project for more than a year.

Roberts said the job will cost about $805,000 and that the Sheriff’s office has already weighed in with the initial $50,000.

“This will be a great honor to a very special person,” Roberts said.