.Councilman Estrada Will Not Seek Reelection 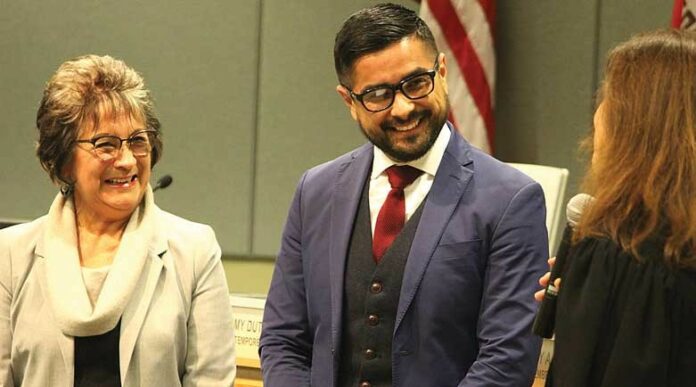 Watsonville City Councilman Francisco “Paco” Estrada during Thursday night’s special meeting announced that he will not seek reelection this fall.

Estrada, the representative for the 4th District, was elected into office in 2018 and served as mayor in his first year on the city council. His term will end at the end of the year.

Estrada in a brief but emotional statement said that over the last four years his life has changed substantially. Perhaps the biggest change was the birth of his daughter, Catalina, in 2020.

He also assured his constituents in the 4th District, which encompasses most of the neighborhoods off Ohlone Parkway and communities just north of Clifford Avenue up to Freedom Boulevard, that he would work with whoever steps into office in December.

The announcement seemed to catch his colleagues off guard—the city council gathered for the special virtual to discuss proposed redistricting maps—but they nonetheless lauded the first-time politician for his service.

“You are the type of leader that we really deserve in this community,” Councilman Jimmy Dutra said. “You’re kind and thoughtful and are always trying to find a balance. You will definitely be missed.”

“You have to balance us as a council and I continue to appreciate that and I will continue to enjoy and take note of that as we work through this year,” Parker said.

Estrada, 39, the child of immigrant farmworkers from Mexico, defeated challenger Jenny Sarmiento in the November 2018 election for the 4th District seat. He attended local schools, graduated from UC Santa Cruz and earned his master’s degree in modern history from San Jose State University.

Estrada became mayor thanks to 2014’s voter-approved Measure I, which rotates the seat yearly by district.

Considered by his colleagues as a breath of fresh air in a political landscape that has been dominated by seasoned leaders who have multiple stints on the council, Estrada has been a strong advocate for City’s parks and recreation programs, community involvement and representation. He has also helped guide several city-wide efforts such as the Ad-Hoc Committee on Policing and Social Equity.

His decision means that at least three city council seats will switch hands this year. Along with the change in the 4th District, the 3rd and 5th districts will also see new representation as Lowell Hurst and Rebecca Garcia, respectively, will both term out. Parker will also be up for reelection in the 7th District.

City records show that Kristal Salcido, a Santa Cruz County Assistant District Attorney, has come forth as a candidate for the 4th District seat.

Salcido, who was a member of the City’s redistricting committee, spoke during Thursday’s meeting about the maps before the city council.

She also heaped praise on Estrada.

“I live in District 4 and I appreciate your service,” she said. “You’ve been a real gift to the community.”